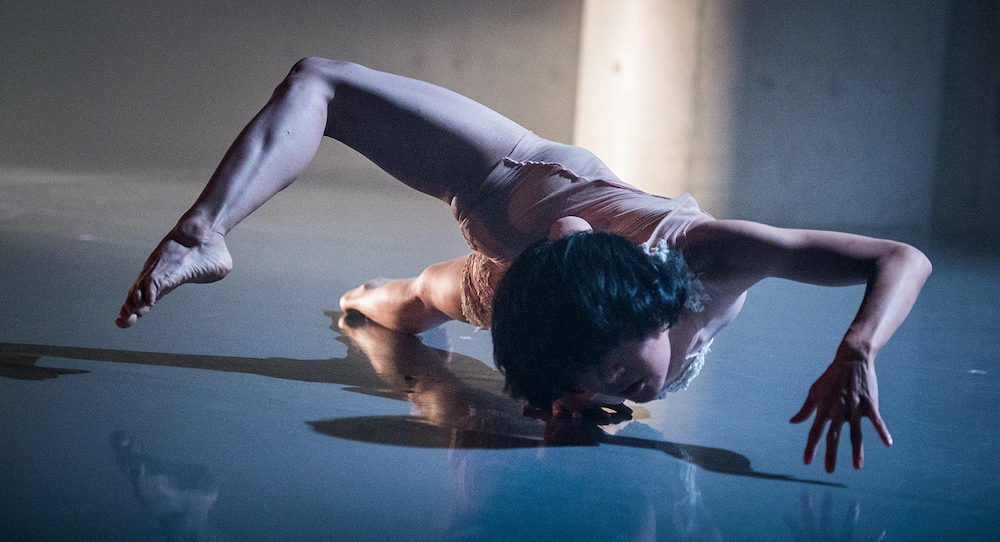 We think of dance as being centred in the body, but what if that body were not human? What if the body was de-personalised, reduced to an organism – how would it move and respond?

Ruri Mito’s austere and often extreme solo work, Matou, presents us with a conundrum. By showing us a faceless, highly contorted form, she edges us toward a kind of discomfort. On one level, we wonder at the discipline and possible pain involved in the performance; yet, on a deeper level, we are struck by the eerie unnaturalness of a body seemingly stripped of persona, stuck somewhere between monster and ghostly presence. Indeed, Matou posits us in the liminal space between life and death, between horror and voyeurism.

Staged under the Asia TOPA umbrella, Matou coalesces the precise aesthetics of Mito’s native Japan and motifs from conceptual and performance art, incorporating strands of crisp minimalism and pure ordeal into a stark, slowly unfolding crash. Indeed, by beginning in quiet stillness – Mito’s distorted figure in the middle of a room – the skin of theatre is punctured. Environmental sounds (traffic, the rain) and the various grunts and huffs of the audience enter into piece. Now this strange, un-human, flesh creature has burst through from the realm of fantasy and performance and into our world. Now the ordeal is ours. Will we keep watching?

Aside from the metaphoric niceties, the work is also testament to Mito’s exceptional technique and control. The shapes she makes, the shifts she undergoes, the precision of her breathing; it holds the fascination of elite discipline and endurance. Thus, while Matou is relatively still, the body is always pushing at the edges of itself.

As if to underscore all this, the space is left deliberately undressed. The lighting and sound are spare. There is no ‘pretty’ here. The disembodied body before us is wracked. Hovering, folded up, denied the disguise of face. Yet, onto this nominally empty canvas, Mito drips beguiling lines. We keep looking because those drops could very well be blood.

Although Matou is understated and even clinical at times, it is the raw presence of the dancer that holds you. Her face is hidden, there is a ghoulish, spectral quality about her, yet we know she is human. Even in the act of its obscuring, the core truth is revealed.