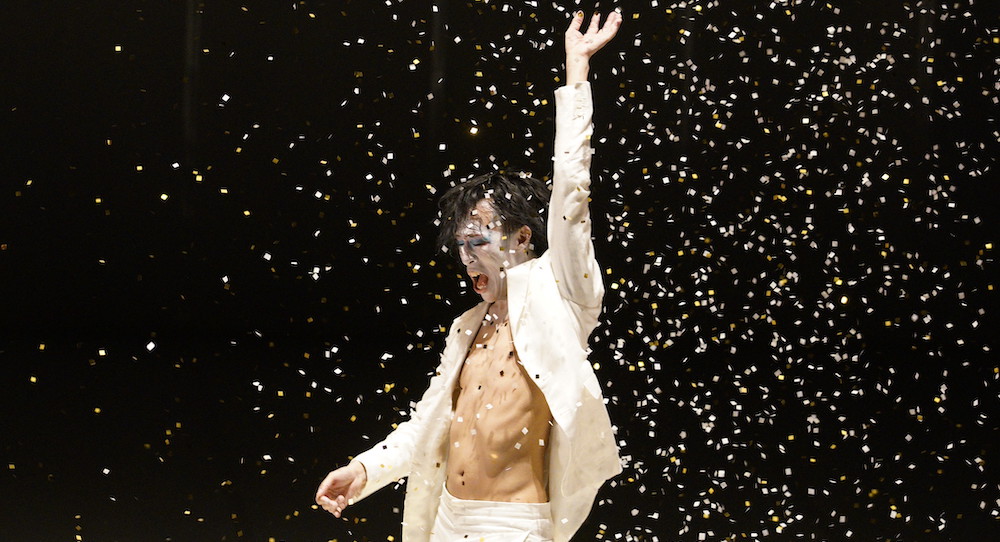 How does the world enter the soul? Can a nation reside in the body of an individual citizen? And in return, how can the receiver transfigure the message? In Akira Kasai’s widescreen epic solo, Pollen Revolution, the broad sweep of Japanese cultural memory melts into the sylph-like figure of a solitary chameleon. Here, the androgynous angel of history moves between past and present, traversing gender and normalcy, encompassing both revolution and nostalgia. S/he subverts the old with the newly possible and, simultaneously, creates the new according to the fashion of the old.

Performed by choreographer Akira’s son, Mitsutake, Pollen Revolution is the Kasai’s beautifully wrought meditation on the grand cycle of life and death. History moves like the seasons — linear and circular. Each iteration reflecting the last, signalling the next. Meanwhile, the individual enacts the ceremonies of living and dying, whilst at the same time resisting their inevitable momentum.

On one level, this is a metaphor for a large-scale national narrative. It begins with formality and studied grace, with the costumed kabuki and its ritualised sexuality. There is order. Everything is refined. The dancer floats, as if along smoothed paths, in prescribed arcs. Resistance (gravity) only intervenes at the point of deviation.

Then, almost unforeseen, Admiral Perry appears in Tokyo Bay, and everything changes.

Now we are stripped of our ancient elaboration. Today, we are sleek and modern. We dance in the old way; yet it is not the old way. It is faster. The crash, when it comes, is more brutal. Now we are made in the image of the revolution. We speak its new language with vigour, until it, too, threatens to drown us out. Perhaps, only from the distance of quiet, may we sense that, for all the noise, you are still the voice of our love.

Pollen Revolution is a work both dense and sparse. Mitsutake’s body moves with exquisite, technical beauty — sculptural, sensual and tensile. Bringing together elements of Butoh, kabuki, ballet and hip hop, he ranges across history and forms. His strength and grace are exceptional, encapsulating both lightness and struggle. Even the occasional glitches – a heavy step there, an overbalance here – are subsumed into the greater flow in a performance that is virtuosic without ever being flashy.

First performed in 2001, Akira’s now revered work underscores the rationale behind the Asia TOPA experiment by reminding Australian audiences that entire histories and methodologies exist and flourish (and are routinely overlooked) on our doorstep. For dance fans, especially those of us schooled in Euro-American traditions, the aesthetic, rigour and creative choices of choreographers from elsewhere speak to both glorious difference and abiding similarity. Indeed, at the core of Kasai’s Pollen Revolution is cross-pollination. Inevitable, inexorable and, in this case, quite intoxicating.