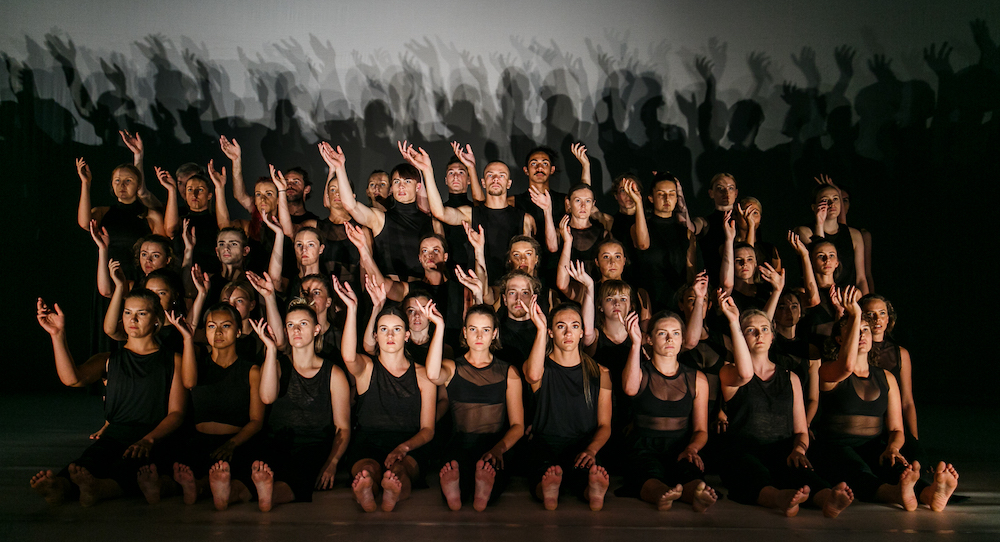 Stephanie Lake’s literally colossal production of ​Colossus​ has just hit Sydney Festival with a bang. From its premiere in Melbourne, in 2018, this work has entranced the world when its YouTube video went viral within minutes of being released. Getting wind of this phenomenon, ​America’s Got Talent ​invited Lake to take the show to the US – which she declined.

After its Melbourne premiere at the International Arts Festival 2018, seeing the production at the Sydney Festival 2020, it feels like it has gone through another iteration to reach a greater maturity with more variation, depth and dramatic impact.

The impetus for the work comes from Lake’s love of working with large groups on stage and her fascination with the interplay between individuals and group formations in society. How humanity en mass, for the most part, manage to self organise themselves within the collective.

This collective endeavour with approximately 50 performers contains the challenge of sourcing so many dancers — many of them not professional dancers — from a wide range of schools and companies. For the Sydney production, dancers came from Sydney Dance School, ​Ev and Bow​, ​NAISDA, ​The ​NZ School of Dance​ and ​Sydney Dance Company’s Pre-Professional​ ​Year.​ This changing roster of dancers gives each performance a unique look, and you realise that collectives and groups can be just as unique as individuals.

Visually, the show is a feast with so many performers on stage. They are on the floor when the audience enters the theatre in a perfect circle, feet to the centre forming a giant wheel. An opening note is played, and the circle of bodies starts to undulate, raising and lowering arms like a giant Mexican wave. Precision, beauty, moving as one organism, and we are underway.

There are a number of different moods explored in ​Colossus — from being an outsider, ridiculed and tormented to friends reaching out to one another, small groups, large groups, echoing societal structures? The production incorporates both small and large groups, duos and large amoeba moving in a rolling mass.

The sound design by Robin Fox at times also seems to resonate a programmed structure, as if the masses are purely machines going about their work in clockwork formation, blank faces and precise movements. Within this story is a reminder of technology’s dominance in our lives as the sound of robotic instructions — “look left, look up, look up higher, touch your face” — moves and determines the performers actions.

Other sounds come from the performers — slapping the ground in unison and using their breath to hiss, shout, even puff in unison. The risk in this work is the logistical nightmare of so many bodies breaking down and descending into anarchy. But what a metaphor for the chaos of life when these dancers perform their roles brilliantly, never missing a beat, with a turn of a head or the flick of a finger.

The climax of this humane work is the singular rebel who risks trying to find his own way, only to be beaten and rejected by his fellow compatriots in a beautifully lyrical solo expressing the sadness of being an outcast.

Carriageworks Bay 17 dance space was perfect for the performance with the white backdrop providing dancing shadows, as well as a high perfect overall view of the stage. Bosco Shaw’s intelligent lighting design allowed the audience to feel the energy of the multitude without feeling crowded out by so many people. The stage was surprisingly intimate while providing clarity and breathing space

Seeing ​Colossus​ for a second time is an enthralling piece of work that holds your attention for a full 50 minutes as one mood effortlessly morphs into another. It’s as if Lake is aiming to include and compress as many human emotions in a tightly packaged colossal vision.