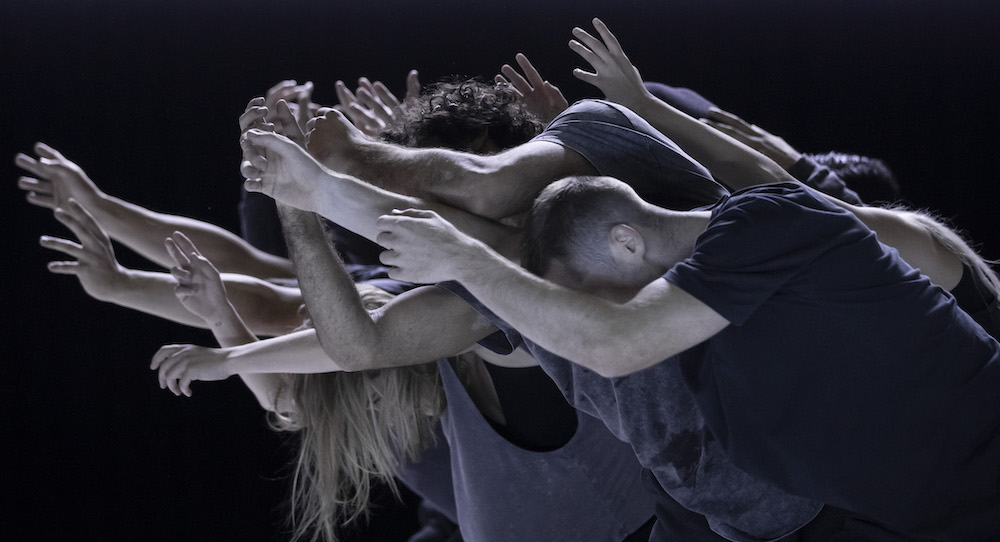 First up was In Walked Bud, choreographed by Di Giovanni. It was inspired by Thelonious Monk’s playful jazz piece of the same name. Di Giovanni’s choreography was slinky yet with angular movements as well. Isolation movements of the shoulders, for example, were also included, and there were itchy, twitchy finger movements, as well as some unusual lifts and possibly some references to Graeme Murphy’s style. Chloe Leong opens the work with a terrific solo. The dancers move between various snappy spotlights, each new lighting sequence revealing something different.

Ariella Casu (also a SDC member)’s Arise was next with the dancers in black leather tops and skin-coloured leggings. Most of the choreography was for the nine dancers as a group, yet they were also trying to assert their individuality, with our body’s limitations in mind, the ‘accepted’ idea of beauty and social expectations. It was as if they were robots. It was very strong and powerful, with at times repeated phrases of movement. Sometimes, the group writhes, pulsates and undulates. At the end, they all take the tops off to reveal their skin-coloured leotards; there is a sense of being renewed/reborn like a butterfly out of a chrysalis. The use of strobe lighting and the booking crashing soundscape, however, were distracting and in great contrast.

The third work was Creeper by Lauren Langlois. The lighting created the atmosphere possibly of a forest of some sort, imagining a reinvention of humanity. What would happen after an apocalypse and humankind had to reboot? The four dancers (Casu, Holly Doyle, Chloe Leong and Jesse Scales in muted green costumes) scurry, shudder and tremble in a group and perform other repeated phrases of movement. They also divide from the group and have solos and form sculptural tableaux. At some points, they use ‘broken wing’ bird-like arms, and use very high extensions to form a line with an arm up as if reaching for something. There is a limping movement and unusual lifts in the partnering when they split into pairs at one stage.

The final work was Zero by Josh Mu, which explored the ideas around “dystopian futures” and “the precipice of death” with the dancers in blue/black/grey shades of casual gear. The crashing thumping soundscape by Huey Benjamin was a bit overwhelming. The cast of 11 performed waves of repeated phrases of movement, undulating yet precise. Small jumps, stamping and a folding/unfolding movement are included, as well as a male pas de deux. At times, arms are angular, others, long and outstretched. Toward the end, the whole stage becomes full of wild whiling movement and runs, ending in a juddering amoeba.

This year’s New Breed was a most thought-provoking programme performed by the sensational SDC dancers in top form.