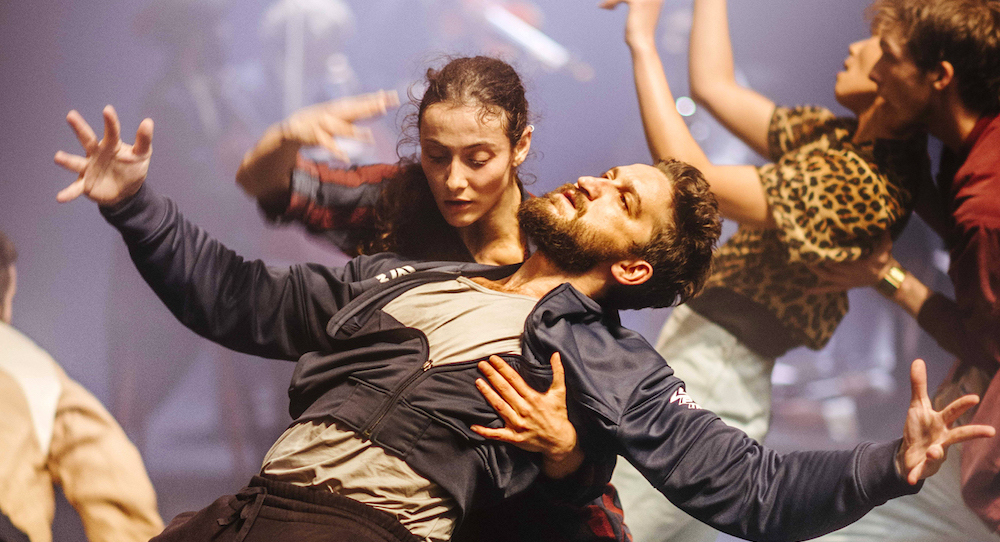 The Hofesh Shechter Company’s Grand Finale returns to Melbourne this month after performing in the Adelaide Festival in March earlier this year. There is much expectation and audience buzz for this demanding apocalyptic and complexly layered work. Dance critics have acclaimed the work from Israeli-born and London-based creative director to be an “electrifying, apocalyptic waltz at the end of time” that was nominated for a 2019 Helpmann Award for Best Dance Production and Best Choreography.

Dance Informa talked to the artist at the centre of this work as he was on his regular morning commute from the Tower Bridge Station to the studio. Six months before starting on Grand Finale, Shechter decided it was time for a break after 13 years of intense creativity. He says he needed time to reflect and recharge and be reinvigorated. “The same thing is in nature,” he describes. “When you grow anything, you have to let the fields lie fallow every seven years, so the ground will be more fertile. As an artist, you need the same downtime to recharge and focus one’s purpose.”

Shechter and his dancers undertook a sabbatical at a creative residency in conjunction with Teatro Marche and Villa Nappi, an isolated village in Polverigi, Italy. “We went for four weeks, in a tiny village, close to Ancona,” he says. “It was a really beautiful place, and together we have created a space and a moment to experiment and let anything that wants to come…come.”

He goes on, “I came with a few ideas that came from my need to find an antidote to the life I was experiencing, the desire to echo an apocalyptic anxiety. I really wanted to echo a feeling, a sort of combination of personal and social anxiety, and examine how I feel inside it. We were there for four weeks and just tried to experiment and flesh out the feelings involved in an atmosphere of apocalyptic times — feeling that everything is collapsing around us, falling apart, from politics to the financial world, to borders to nature. I was kind of curious to know how people feel inside it and mirroring that, putting images on stage.”

Shechter was particularly interested in how these individual feelings could be reflected in wider social structures. “The interesting thing for me is to see how people feel within the structures of society, the social elements and forces that work around people,” he notes. “I find it really, really interesting, and dance has an opportunity to explore this.”

He adds, “The company also has the opportunity to explore this fact. By having a large group of people [15] on stage, you kind of have a micro society on stage that forces us to examine our place in the world, and how we feel inside.”

“You know, the work is so reflective of our lives, our emotions and the social interactions that we have with the world,” Shechter says. “But being isolated from all of that gives us perspective, which means we can really examine it. For me, it’s very important to have a moment when we’re separated from our actual life to create the work. It means that we can really go further.”

As well as the choreography, Shechter composed the music for this performance with five live musicians. He explains that the music contains some of his individual ideas, while the creative process involved collaboration and exchange with other musicians.

“Music is a very powerful element in the work and goes hand in hand with the choreography,” he reveals. “I work with live musicians, and I wanted the sound to generally feel very folky, very tender. While recorded music can be powerful, live music forces you to connect with the audience and stay very much alive when you are performing. There’s something very exciting about the risk of having live musicians on stage.”

He continues, “For the music, we would work a lot with improvisation, also looking for the right sound between the musicians. So there’s a lot of improvisation together with me singing some things and leading them. And at the end, some of the parts are very composed, and some of them are still improvised during the show. We keep a very live atmosphere on the stage. Much of the music is actually inspired by Tchaikovsky. I kind of took apart a few melodies of Tchaikovsky, and in another part, there is a very old, very famous Jewish folk song that comforts and reassures us in times of trouble. It’s aboutthe world being a very narrow bridge, a very dangerous bridge, but the most important thing is to not be afraid.”

Shechter says he likes to take his productions on tour. He finds that each performance needs to balance ambition with relatability.

“On the one hand, the work is very ambitious for a contemporary dance work,” he says. “We have live musicians, which means including wireless connections, and you have a big set and a big lighting design. On the other hand, we want to find ways to be able to control this, because the most important thing for me is to share the work with people. There is no point for me creating the work and just keeping it at home. So sharing all these emotions and all these experiences with people is ambitious, but my ambition is also to share with the world, so we find ways for it to be mobile and transportable throughout the world.”

The topicality of walls is very much in the forefront of our mind, but Shechter is keen to distance himself from direct references to walls in our current news cycle. Instead, he prefers to explore the elemental quality of walls, and their dual role as a shelter and a form of powerful division.

“I’m not trying to make direct references to any one place and time,” he shares. “But obviously, you know, the idea of the wall is a very, very powerful one. In human history, our ability to build a wall is what differentiates us from animals; it’s what gave us power. With a wall, I’m trying to create poetic imagery, a very simple one that will inspire, will trigger people to think about many things. I think that the very presence of the wall on stage is very triggering, and I want to inspire them to explore the emotions that it triggers.”

Another powerful section in Grand Finale is a section called “Te Pō”,which is inspired by the spiritual power of the Maori Haka. When asked how local audiences responded when the company performed in New Zealand, Shechter says, “We arrived just after the shooting in Christchurch and we asked ourselves, ‘Now what?’ Luckily for us, the locals wanted to work with us to ensure that we were doing it with the right spirit and that it was approriate. After the recent tragedy, the community thanked us because they were able to engage in the performance as a way to grieve and mourn.”

Shechter continues, “So we changed the Haka section when performing in New Zealand, and it was renamed Te Pō. We also participated in a ceremony where the leaders transferred the spirit of theTe Pō to a shell which they gave us to take on tour. This gift allowed us to perform this section with the right cultural spirit. I’m very grateful to the local NZ Maori community for their willingness to help us to change the work, and it’s now one of the most powerful sections in the production.”

We ask if he is happy with the reception Grand Finale has received throughout the world. For Shechter, the main source of gratification comes when audiences emotionally engage with his work. “I’m extremely humbled and satisfied with the response,” he says. “I never thought that the audience would be so moved by the work. Everywhere we go, there have been very emotional responses to the work. It has generally been very powerful and positive. I feel very, very lucky in a way to just be able to create and share my work with thousands of others.”

And while this work continues to have wider impact beyond its origins in Villa Nappi, Shechter is already on to his next work.

“Unfortunately, I won’t be in Melbourne, even though it is one of my favourite cities in the world. I particularly like to go there to watch the Australian Open. At that time, I will be in Canada in residency creating my next work.”

When pressed for details of this new creation, he says that it’s a reworking of an earlier work called Clowns that he developed with Nederlands Dans Theater 2 in 2016. “It’s a lighthearted piece which I love, but there is a heavy element with relentless choreography on an exploration of the various amusing and less amusing ways that people kill each other! But the new piece that I make will be completely different. It will be very meditative, contemplative, so I’m trying to create a balance in that evening, noise and kill and beauty and order. It came from an internal need to counterbalance, an antidote to the life I’m experiencing. It was my need, and I hope that it will be other people’s need as well.”

Grand Finale is obviously not the final act of Shechter’s creativity. He continues to explore themes of endings, and he reflects on how his own personal feelings and anxieties are mirrored in the wider world.

Hofesh Shechter’s Grand Finale will be presented at Arts Centre Melbourne as part of the Melbourne International Arts Festival from 10 – 13 October. For tickets, click here.