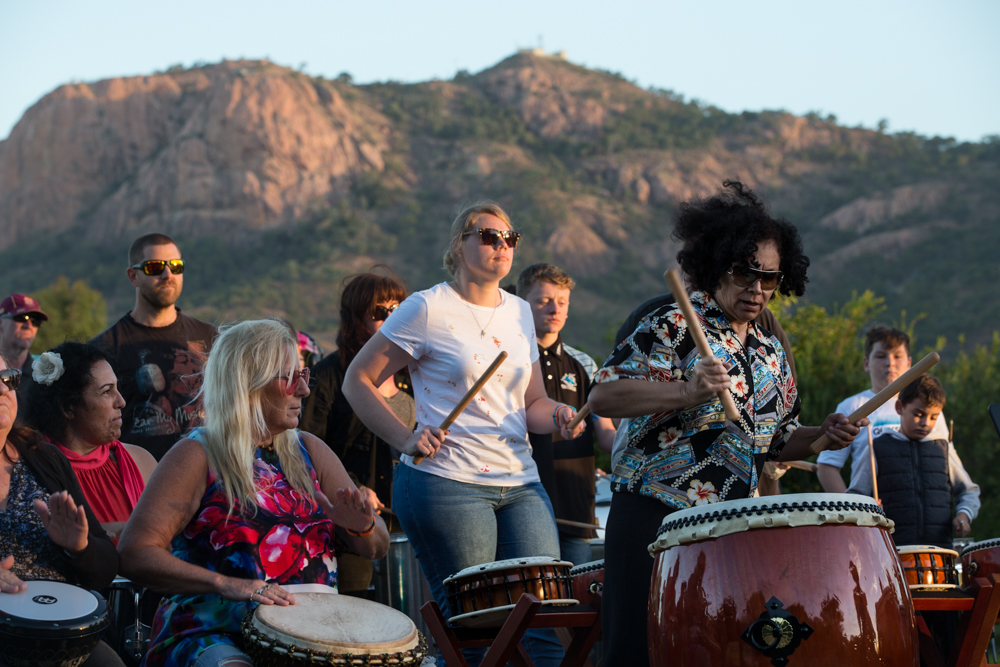 Noise is a catchy, powerful and thunderous work of epic proportions. At its centre is the collaboration of six Dancenorth contemporary dancers and a 100-person-strong battery of drums. This is the brainchild of Dancenorth’s creative directors, Kyle Page and Amber Haines.

For Page, the inaugural NAFA festival was an opportunity to showcase the region’s artistic talent. “I think there’s such an extraordinary cultural life up here in North Queensland, and specifically on the back of the success of the 2018 festival,” he shares. “This year had a huge line-up of national acts, some international acts and a whole bunch of local artists performing. Also, this month in Townsville has a whole gammat of events and festivals that are all being umbrellaed under the North Australian Festival of the Arts, including the Australian Festival of Chamber Music, a sculpture festival and some amazing live performances at the Fringe Festival.”

But the ability to drum up interest in the project depended on local networks. “We’ve been working with Costa Hagiaglou of King Social’s and King Konz School of Music,” Page reveals. “And then we thought, ‘Why not invite people into our creative space?’ We were originally thinking that we would like to work with 50 drummers, and we thought that was pretty big. But then Costa one-upped it and said, ‘Why don’t we invite 100 drummers!?’ Once you say 100 drummers, it’s pretty hard to go back to 50.”

For Page, this size isn’t the first time he’s worked with a gigantic ensemble. “Last year, we performed in the Opening Ceremony of the Commonwealth Games with 400 people. If it taught us one thing, it was really the power of ensembles, large ensembles, of people coming together, working toward a collective artistic outcome.”

But the challenge wasn’t just the size of the ensemble but combining the various drums, playing styles and skill levels into a unified vision. “Starting with Costa’s drumming school students, we put a call out via Facebook that basically said, ‘Anyone with drumming experience, whether that be pencil drumming, steering wheel drumming, whatever your level of drumming, you are all welcome.’ And we now have this diverse range of people and experiences and ages that’s just a gorgeous snapshot of Townsville’s artistic community. We had one amazing guy rock up with a lawnmower catcher and two drum sticks!”

This does not mean that the performance would be just a loud jammimg session; there is a score composed by Costa.

“So the drummers were rehearsing once a week, every Sunday,” Page explains. “We spent three hours with the drummers. We also did some extra work in the studio. There are a number of lead drummers. So there are six primary groups that we’ve been working with; we’ve got Taikos, Snare drums, Djembes, Bass drums, Floor Toms, and then we also have a drum kit and shakers and, before I forget, a junk percussion group.”

But just as important for Dancenorth are the personal stories that have emerged when people have engaged in this artistic project. Page recounts one story. “I spoke to a woman last night; she came up to me and spoke about what this project has meant for her. And how she went through a whole process at the outset when she heard the call for drummers. It took her five or six days to build up the courage to commit to the decision of actually pursuing it. She was inexperienced and kind of afraid of her lack of capacity as a drummer. By going through the process, she was so inspired, that she has now cultivated such a relationship with drumming and music that she goes home googling, teaching herself, and she’s gone out and bought herself a drum. But the most important thing has been the development of her self confidence. After the initial trepidation and once she started, it’s been the most liberating thing for her.”

For Page and Dancenorth, the rewards of these projects aren’t only a celebration of multiculturalism and the local community, but “It’s really this idea that there are these fundamental points of connectivity we share as humans,” Page describes. “I think, you know, we can so easily find points of disconnect and points of abrasion or divide. But really, at the core, music and dance are something that we can all share and/or celebrate, regardless of the host of different divisions that we can easily lean on.”

This 15-minute, high octane performance features costumes by Andrew Treloar, a long time collaborator with Dancenorth. “And what we’d love people to realise is, well, we want this sound to be infectious and absolutely stuck in the ears of the audience for days and days to come,” says Page.

He also believes that Noise is a work that can travel well and speak to all types of audiences. “It’s been composed in such a way that it connects deeply with audiences and with communities. It’s not a fly in, fly out work where we rock up, do a show the following night, and then scoot out of there ASAP. Instead, we embed ourselves in the community. So we might spend a week or two weeks working with the drummers hosting workshops for local dancers, building a show in collaboration with the touring company and the local artists. It’s also great for outdoor performances, which means that the audiences don’t necessarily have to be familiar with contemporary dance.”

Page adds, “When we rehearsed on Strand Beach Townsville, we had people walking by. Then they slowed down to stop, and then they were compelled to sit and watch. Then they were compelled to start moving. There’s just this amazingly infectious quality to the rhythm and the sound of these 100 drummers and six dancers performing alongside the ocean.”