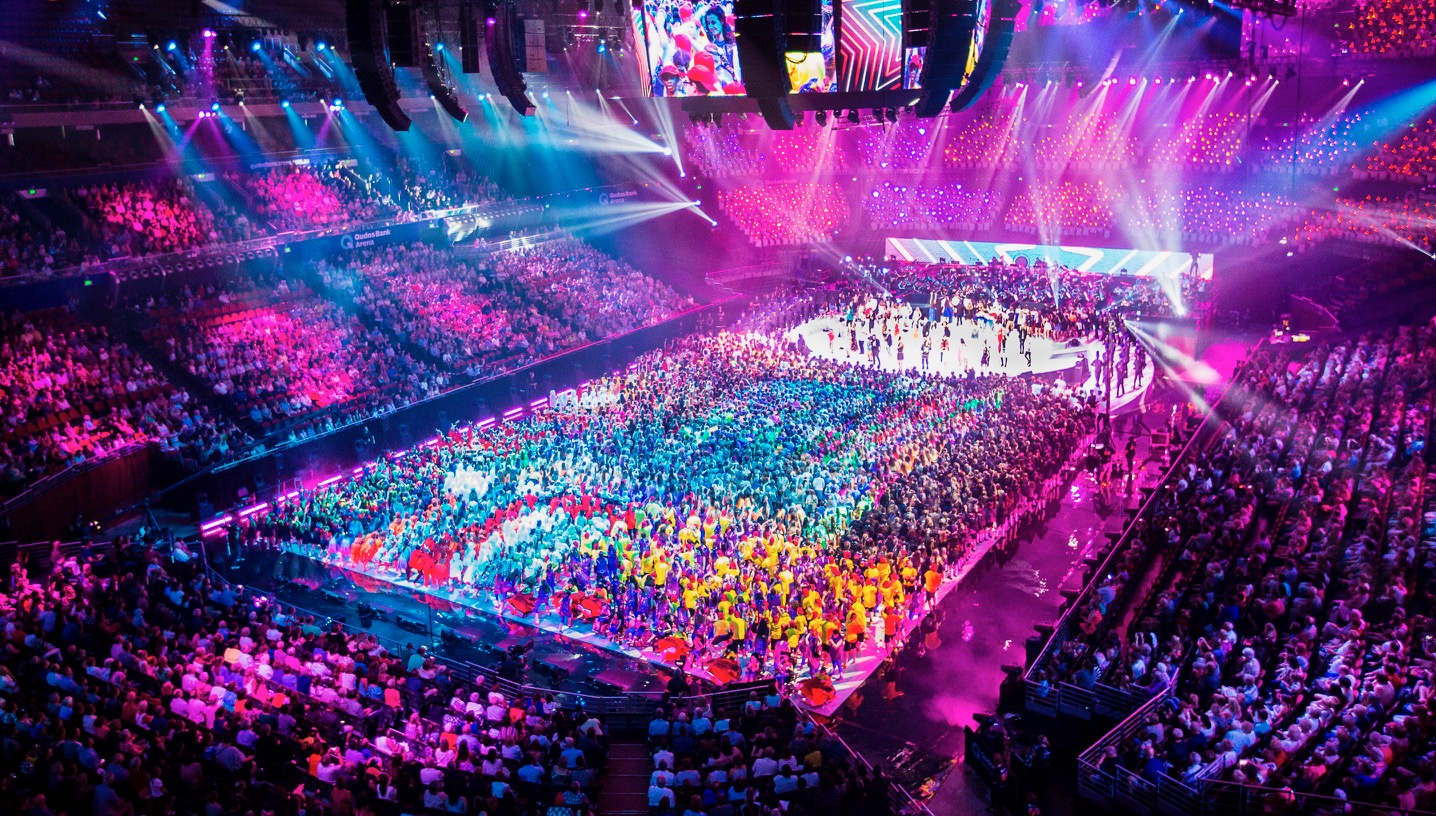 The very first Schools Spectacular was born in 1983 and was organised to test the acoustics of the brand new Entertainment Centre down near ChinaTown in Sydney where Darling Harbour would eventually be built. Seven thousand five hundred NSW children and teachers filled the seats at this inaugural event.

The Entertainment Centre was the place to go in the ‘80’s to see performances by Elton John, Lionel Ritchie, River Dance; as well as Ice-skating spectacles and other performances. Over the past 40 years, the School Spectacle has experienced phenomenal growth, extending to all corners of NSW, including Norfolk Island and remote country areas.

“It remains a remarkable tribute to the original visions of its pioneers and continues to promote the aims of encouraging diversity and inclusion, celebrating the talent in NSW Public Schools.

This is the third year the Schools’ Spectacular has been held at Olympic Park.

When you climb up high and into your seats in the Arena, this event absolutely deserves the description, Spectacular.

The 2018 theme is THE GREATEST and from vocals to instrumentals, from contemporary dance to classical ballet, Australian diversity underpins the performances. For example, a colourful Bollywood production celebrating Australian diversity with choreography by Shyamla Eswaran.

Diversity is also incorporated into the program with the lyricism of a deaf choir and the inclusion of performers in wheelchairs.

Rayne Huddleston, a year 12 Art student from Karabar High School was asked to create an artwork of massive proportions for this year’s SPEC and talks about wanting to make Art a tradition in his family. “I want to pass it on in the future. I want to show and share my passion for indigenous art and culture.”

Underpinning the 3.5 hours of entertainment is the emotion and drama primarily generated by the music, from guest star Christine Anu, to 13 year old brother Ezra with 15 -year old sister Olina Loau singing like angels.

And of course the Spectacle would not be possible without the support, patience and additional hours given pro-bono by teachers across the state to create, coach and start preparing their students for the Spectacular as early as January ! Applications open in February each year.

I had the opportunity to interview Abby, a 12 year-old student from Jannali East Public School who was performing in the Video Games segment. She shared a little what the performance was about – “We have some different costumes, with blue wigs in one part when we dress up as Tetris pieces. There are 12 girls and one boy who is ‘Wreck-it Ralph.”

This is Abby’s second School Spec, and when asked what she likes most about performing she replies, “I just really like being on stage, performing and dancing and showing people what I can do.”

The Spectacular is extremely demanding on everyone involved including the family who commit to getting their children to rehearsals at the stadium as well as being there for costume fittings. Add to that the energy required for multiple performances, including matinees and evening performances on both the Friday and Saturday.

We asked Abby whether she was happy with the morning performance. “It went really well” she replied and why? “We all did well and there were no problems.”

The process required to participate in the Schools’ Spectacular starts with the sending of an audition DVD to the Dept of Education. If the performance has potential and fits the criteria then the school will be notified and they start preparing.  There may be a further audition required for individuals who have the possibility of performing as a featured artist.

The teachers also manage to have fun as well with a highlight of the 2018 Spectacular being the Teachers’ Band, a group of seven rockers having a great time on stage with the audience bopping along.

There are too many highlights to name, but some of the most notable included 11 year old solo violinist, Justine Zhang; the breathtaking singing and music of the Schools Spectacular Orchestra and Choir’s rendition of Zadok the priest by Handel. Dance performance groups had the support of a number of well-known choreographers, such as Virginia Ferris and Cristine Gillet.

In its 18th year, we continue to bear witness to the transforming power of music and dance, shown by International research to have a positive impact on the physical and emotional well being of children. And all artists involved certainly seem to echo young Abby’s words. “They really like just being on stage, performing and dancing and showing people what they can do.”