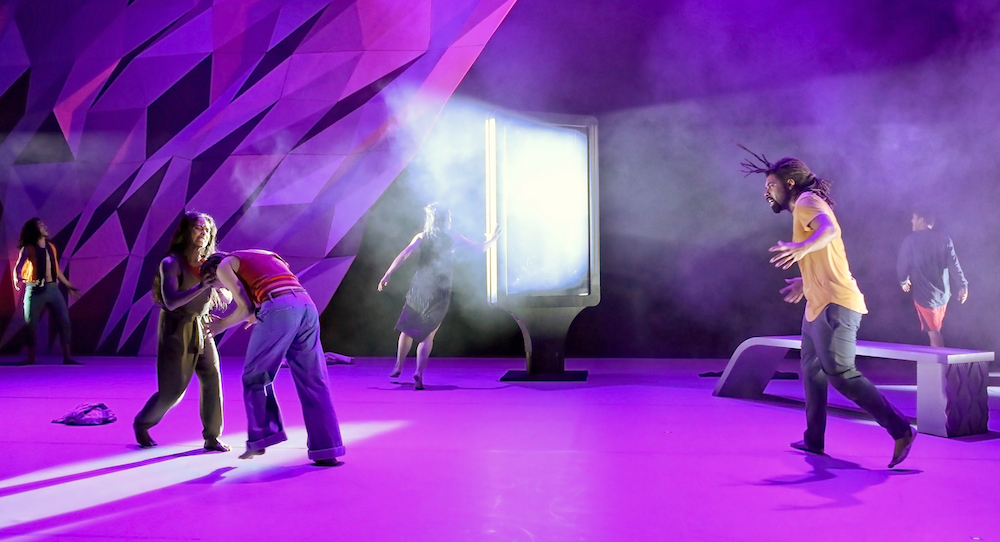 Marrugeku is dedicated to Indigenous and non-Indigenous Australians working together to develop new dance languages and operates between Broome, WA and Sydney.

For the production of Le Dernier Appel (The Last Cry), the company has collaborated with Kanak performers from New Caledonia. Their focus is recognition and acknowledgement of their Indigenous people, and the work asks questions about political, cultural and personal decolonisation and separation in both countries, while New Caledonia is moving toward a referendum on independence from France (in November).

Nicolas Molé’s set design is minimalist, with a smooth park bench, an electronic billboard and an abstract geometric backdrop. The billboard flashes news bulletins about various political events in both countries. It also has a green leaf design that ripples and also displays other images such as an anonymous face in red. At a couple of points, it is sent spinning and flashes a mirror on the back.

Costumes vary from casual streetwear to a glorious textured strapless blue dress. Nick Wales and Bree van Reyk’s electronic score, with its insistent beat, pulsates, beeps, thrums and includes song and a repeated drip (or is it a clock ticking?).

The cast of six – Amrita Hepi, Stanley Nalo, Krilin Nguyen, Yoan Ouchot, Dalisa Pigram and Miranda Wheen –  vividly express the despair, frustration, longing and rage over the decades of political waffle and whitewash that have yet to achieve the results the Indigenous people of both countries’ desire. Pigram is co-director of Marrugeku, as well as co-choroegrapher of this work, and also performs amazingly in it. Nguyen athletically flies spins and jumps, seemingly jet propelled. Nalo and Ouchot are powerful and charismatic. Hepi has exquisitely expressive arms, while Wheen radiates a devout earnestness in a hypnotic performance.

However, while it is full of amazing energy and wonderful performances, there is no real sense of emotional or narrative development. It all appears to be on the same emotional level, repeated. The dancers often seem to be performing solo in their own theatrical space rather than as a cohesive group, until almost at the conclusion. Traditional Aboriginal dance is taken and fractured, and ballet steps are deconstructed.

Sometimes the group does perform in unison as an entity; at others, they splinter into duos or trios. Repeated phrases of movement sometimes occur. Fluid, slinky, feline solos are included, as are dangerous, whirling martial arts-like sequences and hip hop/breakdancing. The dancers run, flail, shudder, jump, shout, spin, fall, then recover. There is a dream-like, almost floating segment, which is contrasted with intense, internalised, twitchy solos. There are silent primal screams and a segment when one of the dancers brushes the floor with her long hair. Angular movements are included with straight arms and “aeroplane”- like ones.

The individual performances by the cast of six are amazing, and the various creative elements and the intention behind the show are excellent, but, sorry, I found this most disappointing. The message the show is trying to get across was rather overwhelmed at times by the flashing information on the billboard – while most important at times, it was most distracting.