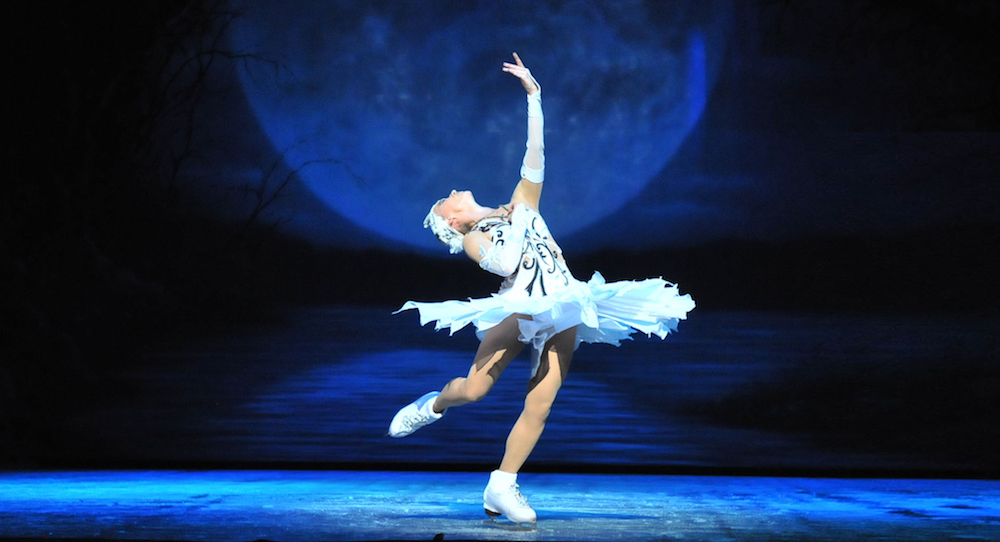 This traditional ballet masterpiece is reimagined on ice with a talented cast of predominantly Eastern European elite ice dancers who include Olympic Games competitors and World Champions. Producer Tony Mercer and Musical Arranger Tim A. Duncan wanted to present a clear adaptation of the storyline of Swan Lake that would retain its fairy tale magic. It follows the romantic tale of Prince Siegfried (Bogdan Berezenko), who falls in love with the Swan-Maiden Odette (Olga Sharutenko). She lives an existence of part-human and part-swan, a curse that can be broken by the love of a prince. Evil Sorcerer Baron Von Rothbart (Serei Lisev) uses his daughter Odile (Maria Mukhortova) to play a trick on the prince, leading to an intriguing plot twist.

Performing on a temporary ice-rink on stage at Sydney’s Capitol Theatre, the ice dancers move with speed and athleticism in a relatively small space compared to typical large ice-skating arenas. They executed highly technical triple flips, throw axels, death spirals and double axels with precision and ease, breaking the rules of traditional figure skating. A highlight that showcased the strength and skill of the dancers was a trio featuring Odette (Sharutenko), Baron Von Rothbart (Lisev) and Odile (Mukhortova), during which Lisev lifted both Sharutenko and Mukhortova at once while still effortlessly skating. “Wow” was the only world I heard on repeat by the man sitting beside me each time the ice dancers delivered these amazing feats.

Swan Lake is revered for its iconic music scores by one of Russia’s greatest composers, Pyotr Ilyich Tchaikovsky. In this production, the music was delivered by a pre-recorded orchestra, but nevertheless, Tchaikovsky’s genius compositions wonderfully brought to life this fairy tale world. Original costume designer Albina Gabueva took inspiration from the Romanov period in Russian history to create a beautiful array of costumes that are enhanced by the speed and agility of the ice dancers’ movements. There are no tutus to be found; instead, the signature group of swans are portrayed with layers of flowing white material, embellished white leotards with feathered head pieces to reflect a swan’s majestic beauty.

This creative production had many awe-inspiring moments, including aerial stunts that propelled the lead swan Odette (Sharutenko) to gracefully fly through the air and a duet by the palace guests using silks and acrobatics while suspended high above the ice. It is a difficult trick to perform, but the added complexity of performing this while wearing ice skates was an unbelievable stunt to witness.

Swan Lake on Ice successfully delivers a beautiful combination of artistry, theatrics and athleticism propelled with timeless music scores and a rich storyline to transport you into this fairy tale world.

The Imperial Ice Stars’ Swan Lake on Ice is at the Capitol Theatre Sydney until 29 July. For tickets, visit ticketmaster.com.au.