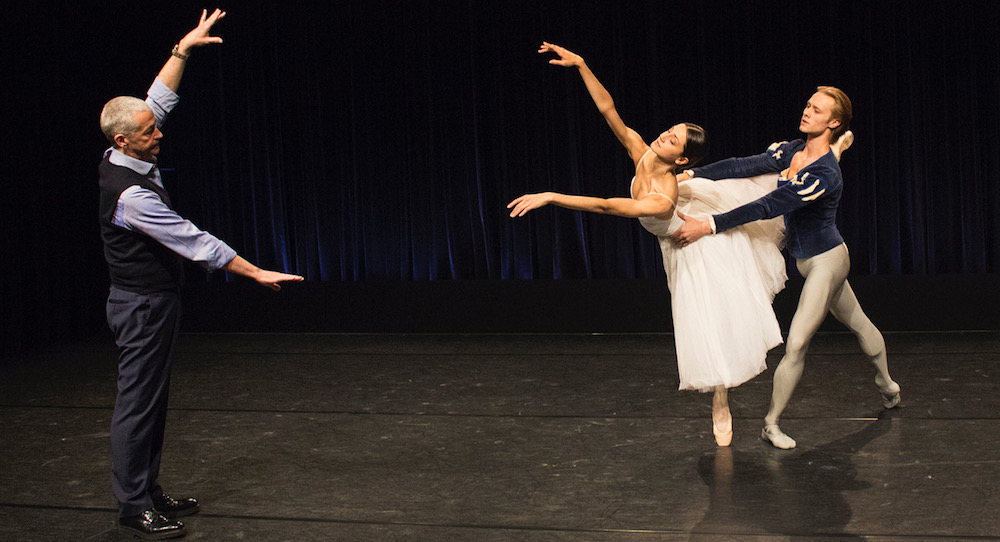 In 1971, the journalist Lorenzo Arruga wrote, “This old Giselle has sent me home happy to have breathed ‘dance’.” Arruga had been to a performance of Giselle at the Teatro alla Scala in Milan, with Margot Fonteyn and Rudolf Nureyev in the lead roles.

The world-famous ballet company, Italy’s Teatro alla Scala (La Scala Ballet), will visit Australia for the first time in November of this year. This will be the 40th nation the company has visited in its 240-year history and will be part of the 2018 QPAC International Series.

La Scala will bring 115 members of the company, including 75 dancers, along with costumes and sets for a three-week program that includes two productions, the original Giselle and Nureyev’s Don Quixote.

Dance Informa had the opportunity to speak to La Scala Ballet Principal Dancers Nicoletta Manni and Timofej Andrijashenko, along with the company’s Director, Maestro Frédéric Olivieri.

Typical working days, at home and on tour

“We don’t have the same working time,” Manni reveals. “When we’re in Milan, we work from 10 until 6pm. And when we are on tour, we have more stage calls and more rehearsals on stage, or we’re travelling, changing cities. We spend lots more time on the stage and not in the ballet studio when on tour.”

Andrijashenko adds, “So when we’re on tour, usually we don’t have a program that we always follow. It depends on where we go and which ballet we’re performing, but usually when we arrive somewhere, we rest and the following day we’ll have a stage rehearsal, probably two stage calls a day until late night (10pm or so).”

The challenges of touring

These two partners, in life as well as on stage, explain the importance of becoming familiar with the various stages on which they will perform while on tour.

“It can be difficult because you need to get used to the stage,” Manni explains. “Sometimes it’s so big, sometimes it’s really small. Everything looks different, and then there’s the ‘raked’ or the ‘flat’ stage.”

“In our theatre and our studios, we have a raked stage,” Andrijashenko says. “Not just in Milan, but in Italy all stages are raked. In new theatres, it’s always flat.”

Maestro Olivieri comes over and joins in the conversation around the routine on tour. There is a lovely familiarity between the director and his premier dancers, and the Maestro puts everyone at ease with his sense of humour.

I attempt to ask a question: “And the dancers? Do they get a chance…”

“The dancers are fantastic. Unique and fantastic,” Olivieri interjects, and we all laugh at his lightheartedness before he gets back to the question of routine. “The real change is the routine. In Scala, when they wake up, they go to the studio, take class and there’s rehearsal. On tour, there’s still a class, but it’s different because every night we have the performance. So, adrenaline is different every day on tour.”

He continues, “Before our first performance, there’s the class then a rehearsal on stage and with the orchestra. After the premiere, it’s a bit easier because there is the second cast, so the rhythm is easier.”

Olivieri explains, “I think, if you could see the schools, and compare them from what they were 15 years ago, even 20 years ago and now, every school takes the best from the other methods in order to change. So more a cross [fertilisation], some retirés higher, some longer arms, some different coordination. And that makes that company. And that makes the choreography of the world. [Whether] they are Bolshoi or in America or Europe, now they all have contemporary skills, choreography, like Forsythe. I think they develop a feeling and move differently. But I still recognize if I see on stage a Russian dancer, or an Italian dancer, or a European dancer.”

So where are the differences?

They are all unanimous: “The arms.”

“More for the woman,” Olivieri states. “Because the man is more difficult sometimes. But the woman, the arms. If they put more, the way they jump, or not on pointe, all of the footwork.” He prompts Manni to continue.

“It’s true,” Manni adds. “More in the woman you can see. And Russian, I think you recognise immediately because of the style of the arms and the use of the head. French, the use of the feet. And American because they’re really fast.”

Manni, when asked who was her ultimate Giselle, names Carla Fracci, the most famous Giselle of the 20th century, an Italian and a product of La Scala Theatre Ballet School. “We have the best example,” Manni says. “I cannot say anyone else. She was amazing in this role and her interpretation.”

And for Andrijashenko, he talks of Baryshnikov and Nureyev’s interpretations of Albrecht.

Which leads us to the second production that La Scala will perform at QPAC in November – Nureyev’s Don Quixote.

So what are these dancers’ favorite part when dancing Don Quixote?

For Manni, it’s the first entrance. “It’s really, technically really hard, but also … you play with the other characters, and so it’s really enjoyable.”

And we’re all in on the “secret”, laughing, before a question on diet and maintaining fitness and forms.

“You must eat a lot, Timofej, to maintain your energy levels!” Olivieri enthuses. “Benzine, Gasoil…”

Challenges and benefits of touring

“I think for the company, it’s a very special and great moment to go on tour,” Olivieri shares. “I always feel that the company has a special complicity when [we] live together. It’s different when we’re in Milan. Touring is unifying, But afterward, it’s nice. When we return, we go our own way.”

“For me, it’s important that the company has at least two international tours each year,” Olivieri adds. “This year is Asia and Australia, and afterward, next season, we are preparing another tour. It’s important for the company to grow professionally. For the dancer, it makes you change and grow.”

The challenges come from performing in various theatres. Sometimes, the dancers feel more comfortable in one theatre; in another, it’s not so easy. Differences demand change and growth, making it challenging.

“And I think for the name of La Scala, it’s important to be seen in theatres all over the world,” Olivieri adds.

What can the audience expect from this production of Giselle?

“Expect to remember La Scala as the best company in the world,” Olivieri assures. “The best Giselle is here in La Scala.”

He continues, “I expect that the public will really understand the company and the dancers, that they will appreciate the way they dance on stage, recognise the spirit and the generosity, the most important quality of the dancer. Because they have a big passion, and the director, too, has a big passion.”

Olivieri was himself a great dancer in the ’70s and ’80s, working with the Paris Opera Ballet under Nureyev’s directorship, performing the most important roles in the classical and contemporary repertoire.

After his appointment as director of La Scala Ballet, the ballet repertoire was expanded and renewed with new productions, including contemporary works.

Olivieri says he is more than happy with his role, adding, “I no longer think of myself as a dancer. I love to be the director of La Scala Ballet. I’m working for them, not for me. We are very happy to come to Australia. It will be a very nice moment of celebration and dance.”

La Scala Ballet will perform as part of the QPAC International Series 2018 from 7 – 18 November. For bookings and more information, visit www.qpac.com.au/lascala.