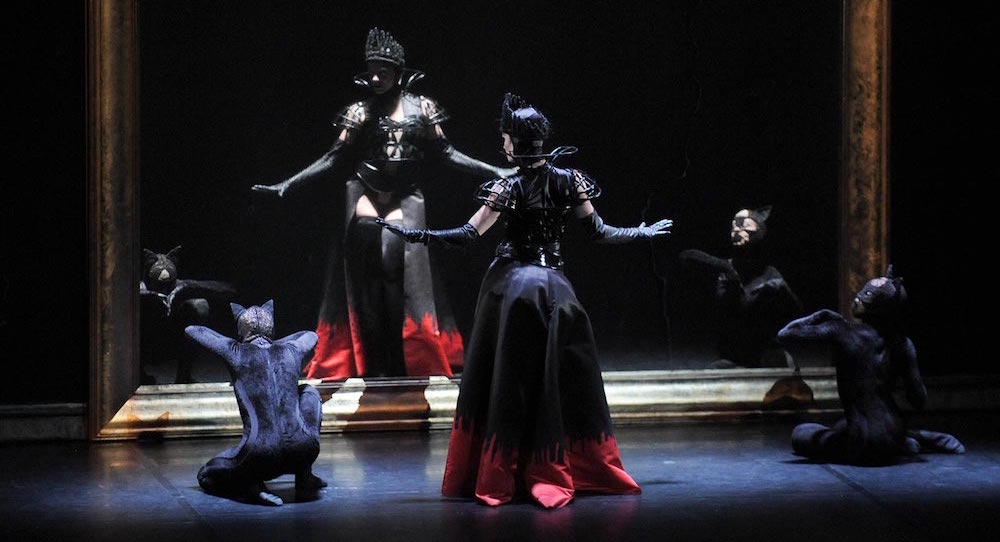 Ballet Preljocaj’s Snow White is not your squeaky clean Disney-fied Snow White but rather a darker, sinister version based more on the original Brothers Grimm story, first published in 1815, and eventually revised in 1854, with dark overtones and violence and brutality. The entire cast of the company, which is based in Aix-en-Provence, gave tremendous performances.

The piece is choreographed to selections from unidentified compositions by Gustav Mahler and the contemporary work of 79D, as well as voice overs, white noise and bells. Director and choreographer Angelin Preljocaj matched the image of the Dwarfs’ wall-climbing with Mahler’s funereal take on “Frere Jacques” from his “Symphony No. 1″ and Adagietto from Mahler’s Fifth for the duet between the Prince and the “dead” Snow White. (Australian audiences will think of Graeme Murphy’s After Venice.)

Some of the much hyped costumes by Jean-Paul Gaultier were stunning, but I was a bit disappointed in Snow White’s dress, cut very revealingly and split at the sides, which was semi-elegant gown, leotard and long drapery and awkwardly and unflatteringly hung loosely between her legs and swung sideways as she danced.

Choreographically, Preljocaj blends ballet, contemporary, folk dance and physical theatre. There are allusions to the Rose Adagio from The Sleeping Beauty and hints of Sir Kenneth MacMillan and Mark Morris’ styles. There are some death-defying acrobatic leaps and catches, and high lifts are also featured in the very demanding choreography. The choreography also included quite a bit of slithery, intricate floorwork and was tremendously executed by the entire cast. The corps were drilled to be exactly in time and committed themselves entirely to multiple characters throughout the ballet.

Snow White (we saw Verity Jacobsen) is presented as young, fresh and sweet, but with a hidden underlying sexuality she is already aware of and controls – she flirts with, tempts and teases her Prince from the start.

Her Prince (Jean-Charles Jousni) gives a most impressive and affecting performance. When Snow White and the Prince meet and first fall in love, there is a bubbling, playful, tumbling pas de deux that ends in a dizzying, swooning, passionate first kiss. One choreographic highlight of the performance was the pas de deux between the Prince and Snow White when he discovers she is dead and dances with her limp, lifeless body (very reminiscent of Macmillan’s Romeo and Juliet). In this acrobatic pas de deux, we see the Prince’s rage and heartbreak at Snow White’s death and how the poisoned apple is eventually dislodged and she returns to life.

The wicked step mother (otherwise referred to as The Queen) was tall, imposing and dressed dominatrix-like in black leather and high heeled boots. Charismatically, menacingly danced by Cecilia Torres Morillo, she has two black leather feline attendants (who at one point prowl into the audience) and is presented as a cross between Carabosse, Odile and the Black Queen from Checkmate. There is wonderful use of a huge mirror with “reflections” (“Mirror mirror on the wall…”), and when she is in disguise for the last part of the story, it is as if she is costumed for a Butoh production with her grey spattered cloak and long wild hair.

The dwarves (here, rather, full-sized Miners) had a spectacular cross between abseiling and dancing first appearance when we view them at their caves (a gloriously textured set design by Thierry Leproust). Australian audiences might think perhaps of the work of Legs on the Wall as they hang upside down, spin, fly and dive joyously in a tightly choreographed and synchronised sequence, a highlight of the performance . When on the ground, they are also sharply, rigorously controlled in their ensemble work and tumbling.

Snow White’s biological mother, who dies in childbirth at the start of the show, returns later on when Snow White is “dead” of the poisoned apple as a swooping, weeping angelic figure. It could be a bit confusing for some audience members, although as both mother and stepmother, the Queens are dressed in black.

The King, Snow White’s father, is also in black and has only a few brief appearances.

The deer – danced by a topless female in black fur pants and a huge antler headdress – that the huntsmen (soldiers) kill and use the heart of to trick the Queen is given some strong, striking, other worldly choreography, semi-robotically prancing and pawing and sniffing the air, leading to a dramatic death.

Snow White is a striking, startling show with many layers of meaning that divides audiences and critics, and it celebrates and explores jealousy, strong femininity and youth.