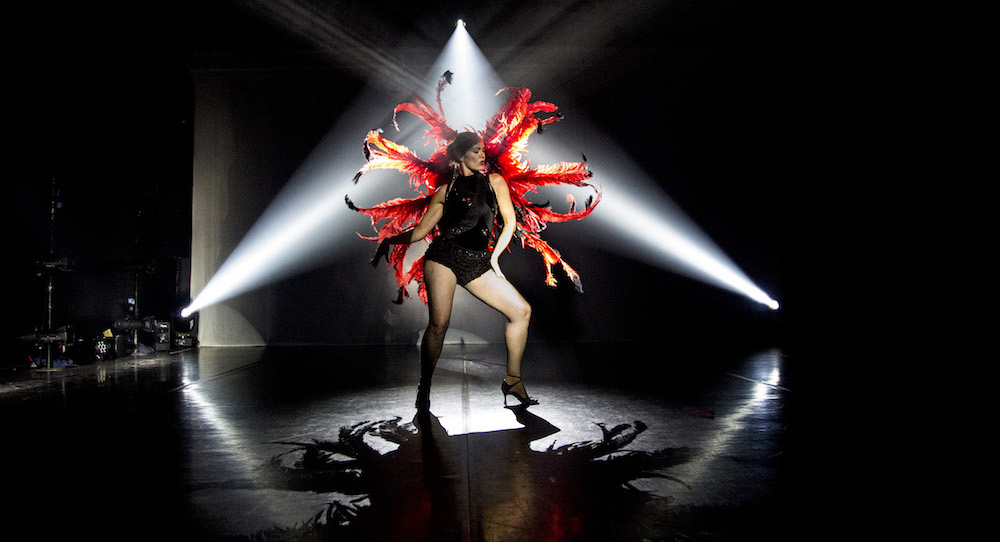 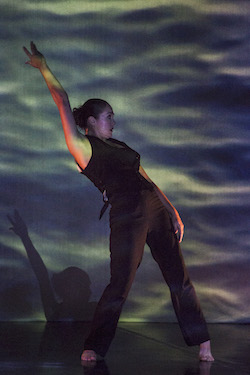 The latest work, RED, presented by FORM Dance Projects at Riverside Parramatta, as choreographed and performed by Liz Lea, is a very strong, powerful, intimate and autobiographically revealing work that considers the potentially rather awkward and embarrassing subject of endometriosis. Lea was the recipient of the 2017 ACT Artist of the Year Award and a 2017 Australian Dance Award.

The performance was also linked with the major Dance Science Moving Well symposium, which was held at the theatre.

RED blends dance, film, spoken word and song. It is emotionally powerful and courageous. Some of the text is ironic, witty and insightful, and parts of the audience were laughing while others were relating in painful agreement. It is also in parts fiery, testy, bawdy and challenging. The work begins with a film clip of a young girl crossing a white bridge, and we hear a counter tenor singing the ravishing “What is life to me without thee” from Gluck’s opera Orfeo ed Euridice, and a voiceover that starts with the words “She thought she could have it all.” The voiceovers are from Lea’s doctor explaining the nature of the illness from which Lea suffered, and the procedures that she had to undergo, side effects and complications and many other medical references. What is also examined is society’s attitude to the female body, menstruation and the medical point of view and “what is normal?” Lea talks about coping with her condition, struggling with the surgery and the various extremely difficult life and career choices she had to make. 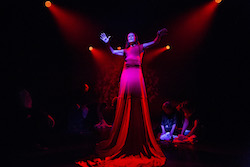 The soundtrack by Alexander Hunter ranges from soaring Gluck to Ricky Martin and The Rolling Stones.

There are two halves to Lea’s performing self in this show – one is on screen, as filmed by Nino Tamburri, where Lea is mostly in a long, red dress, sometimes in a park, sometimes at the beach (the sea as the water of life, while RED is perhaps the blood of life?). The other is the charismatic, powerful performer live on stage.

Choreographically, Lea blends contemporary, ballet, Broadway, showgirls, slithery floorwork, martial arts and classical Indian dance in a glorious mix. There is a trio for Lea and two men, and RED also includes a “codeine nightmare” where Lea is joined by a chorus line of older dancers dressed in black (the women mostly with added sparkles to their individually designed dresses) who danced with and for her and helped her depict the experience of coping with and managing horrendous pain. (Dancers are used to having to “push through it,” but still…) It also features a glitzy showgirl sequence with red feathers and fans (think Chicago). 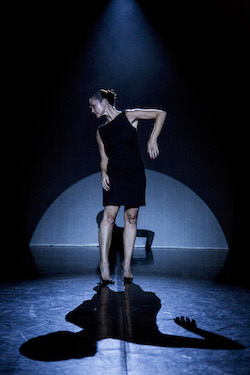 The final section (choreographed by Martin del Amo) is dramatic and very moving. We return to the Gluck aria, but now Lea is dressed in a revealing black designer dress wearing high-heeled black patent leather shoes (with red soles), hair severely pulled back, and looks glamorous and elegant. Her arms ripple, curl and unfurl, and the choreography is a mix of Flamenco and Indian, combining stillness and power. In the last seconds, it “rains” a confetti of shiny red “snowflakes” – a symbol of hope and celebrating women’s strength and creativity, while reflecting on past experiences.