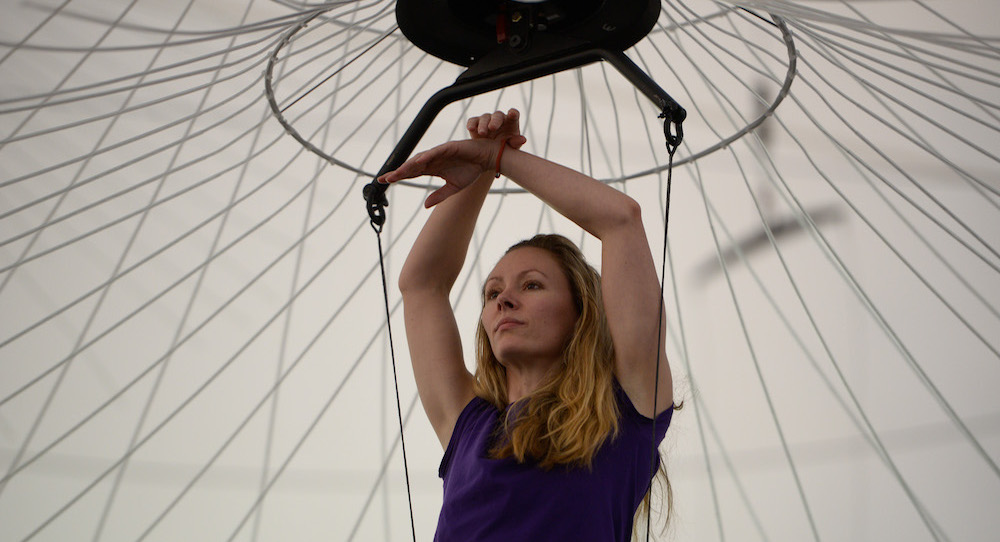 Some things sound so simple and yet, when put into practise, can have a huge impact. Thus, when Robyn Simpson declares that one of her driving philosophies is that “everyone can do something within their sphere of influence to make life just that little bit better,” it becomes abundantly clear why she threw herself headlong into the mire of complexity that surrounds human trafficking.

As a dancer, acrobat, choreographer, educator and co-founder of Circus Kathmandu (CK), the former Adelaide girl literally has the world at her feet, having toured with Muse, appeared in Olympic ceremonies and Millennium spectaculars and carved out a substantial international career. Now, as a new parent in the process of moving back to Australia after nearly two decades abroad, she is able to stand back from the buzz, take stock and expound an often overlooked perspective on dance and the role of the creative arts more generally.

For Simpson, the sometimes airy notion of “creative learning” is rooted in much harder realities. When she and her friend Sky Neal (an ex-circus performer and now videographer) created CK seven years ago, it was not designed for charity or indeed to become a Nepalese novelty item but to alter the path of people’s lives. “We wanted to create an ethical entertainment that could help young people stay in school or go back into learning,” Simpson recalls. “It just felt like a good fit to use the skills that they had, and we had, to actually change the direction of people’s lives in very real ways.”

For most Westerners, the link between circus and human trafficking is not obvious, but in Nepal, many children are trafficked across the border and into circuses, which, in countries like India and Nepal, are not held in the same regard they are elsewhere. As Simpson explains, “It’s a little bit akin to prostitution; and the Bollywood movies have done nothing to help with that.”

CK’s ensemble, therefore, is based around young people who were formerly victims of trafficking. “When we first started, some of the group wouldn’t even admit to anyone that they were still involved in circus,” Simpson recalls. “If we’d known then what we know now, I’m not sure we would have chosen to climb the mountain that we did.”

However, what this mis-match in the status of circus highlights is something more far reaching than mere taste. “Hearing the stories of these young people and their shame at doing something that I love and had seen the value of, I felt really indignant,” Simpson explains. “You know, but for the luck of the draw, I could have been a circus person in India or Nepal instead of getting to use my skills in front of hundreds of thousands of people.”

For the performers, the upshot of Neal and Simpson’s intervention and the subsequent success and global profile of CK has been transformational. “Instead of feeling ashamed of their backgrounds, they’ve been able to transform their own stories,” Simpson says.

That said, the CK story is anything but Oprahfied inspiro-porn. Indeed, the company’s founders have always been conscious that they are “two rich white girls” in a country and a situation that is not theirs. Careful to avoid the garish, pontificating spectacle of the millionaire celebrity saving poor, dark skinned urchins from all manner of evil, or indulging in shallow “newsfeed” outrage, Simpson and Neal took a decidedly pragmatic approach.

“When you look at something like human trafficking, if you want to make a difference it requires a shift in attitudes,” Simpson argues. “It has to be grassroots, but it also has to be top-down. And in Nepal, it was kind of a perfect storm, particularly after the earthquake, but even before that. You know, poverty, social inequality, lack of education – particularly amongst girls – and unfortunately the level of corruption. The people who were benefitting most from the trafficking happened to be the people in government, et cetera, because there was a lot of money tied up in it.”

In fact, as she says it, money lies at the very heart of the dynamic. “When you look at families and the number of children and then a trusted member of their community comes up to them and says, ‘Look, I’ll take your child off you, put them in school in India, they’ll have a good life and we’ll be able to send money back to you and you’ll be able to feed the rest of your children.’ So even though somewhere in the back of their head they may realise that this is trafficking and they’re being fed a bunch of lies, the desperation makes people sign up to it.”

Having got the ball rolling in Nepal, Simpson is now stepping back and allowing CK’s performers themselves to take the helm as much as is practical (given issues around literacy, etc). Although driven by factors of distance and funding – and now parenthood – this is also underpinned by an acute awareness that a couple of “incredibly fortunate” Western performers cannot simply impose their own brand of salvation on people.

It’s a long way from studying dance at the old Grote Street campus of the College of Performing Arts in Adelaide, and a million miles from “some of the really ridiculous corporate work” she has done, but Simpson, hubby and young son are back in Oz and thinking about new challenges. “I have no idea what the work landscape is like is Australia,” she admits. “I’ve done little bits and pieces of shows and education work but nothing substantial; and I sort of yearn for getting my feet on the soil here and seeing what I can do.”