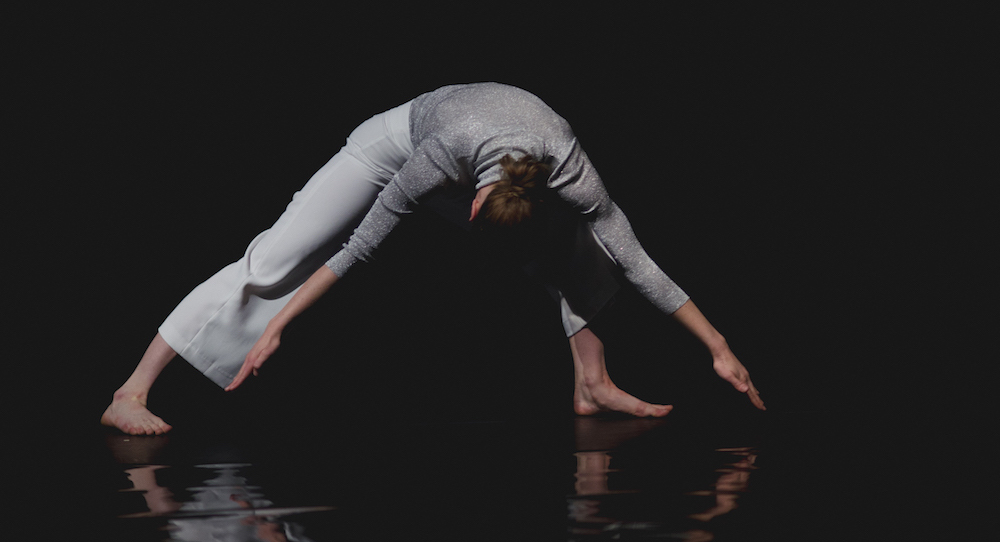 The trouble with double bills is that they can often seem like two parts lumped together in either an opportunistic or simply convenient fashion. Though this is a perfectly reasonable thing for producers and programmers to consider, from an audience standpoint it can come off as disjointed. However, the teaming of Restore and Lara for their short run at Melbourne’s Dancehouse vaults this hurdle, if only because the works appeared to possess a similar spirit. The result is an evening in which the single, isolated body confronts the behemoth of modernity.

Lara, by Austrian dancemaker Mirjam Sögner takes the digital, (the iterated, pixelated motion of zeroes and ones), and maps it onto the organic. With often minute gestures, Sögner moves with the clunky, staccato skips of an old school video game, all the while melding the flicker and jerk into a decidedly human fluidity. At one point her shadow dances on the black folds of a curtain like the ghost of a Lumiere era cartoon, or a witchy marionette from a nineteenth century shadow puppet show.

The beauty and eeriness of the work stems directly from the other worldly effect of the digital arc carved in living tissue. She looks like a woman but perhaps she is simply an approximation. A reduction, as though a human being could be expressed as a heavily compressed 3D motion graphic.

If Lara points at the dehumanising potential of algorithmic abstraction and its hi-tech offspring, Australian dancer/choreographer Renae Shadler’s Restore finds its metaphors in the natural world. Indeed, since its Melbourne Fringe 2016 debut, Shadler’s narrative of frenetic, fast paced life and slower geological and evolutionary rhythms is probably even more pertinent.

Restore begins with calm yogic grace, the elastic body, sinewy and sensual, folding and shifting on a hard reflective surface, and moves from there to challenge, through text and defiantly unhurried gesture, the ubiquitous cultural lie of go, go, go. In a socio-economic complex that champions constant busyness and lauds long hours as some kind of moral virtue and locus of achievement, Shadler references the altogether more patient power of volcanoes and glaciers. Throw in some migratory birds and you have a world of inherently conflicting motives, the epic scale cycles of planetary and biospheric evolution crashed into the linear objectives and monochromatic utility of markets, mortgages and the tick boxes of the ‘must have’ lifestyle.

Together, Sögner and Shadler map their investigations with the cartography of bodies, somehow pitting this fragile and magnificent instrument against seemingly oceanic external forces. Here, in small dances of refusal, the rounded, nuanced, ambiguous individual asserts itself in the sturm and drangof history.

These are both very fine solo works and although the choreographic palette is sometimes a little too similar, Restore and Lara appear to belong together. Perhaps this is because Sögner assisted Shadler with the former, or maybe it goes deeper than that; deeper even than the obvious motif of gender identity or the lazy ideological prism of dystopian doom-mongering. Either way, what you get is a double bill of evocative, sensuous, beautifully detailed dance where the primary vehicle of humanity, the mess of our flesh, is the core driver of our response to the cultures and machines we have created in our image.