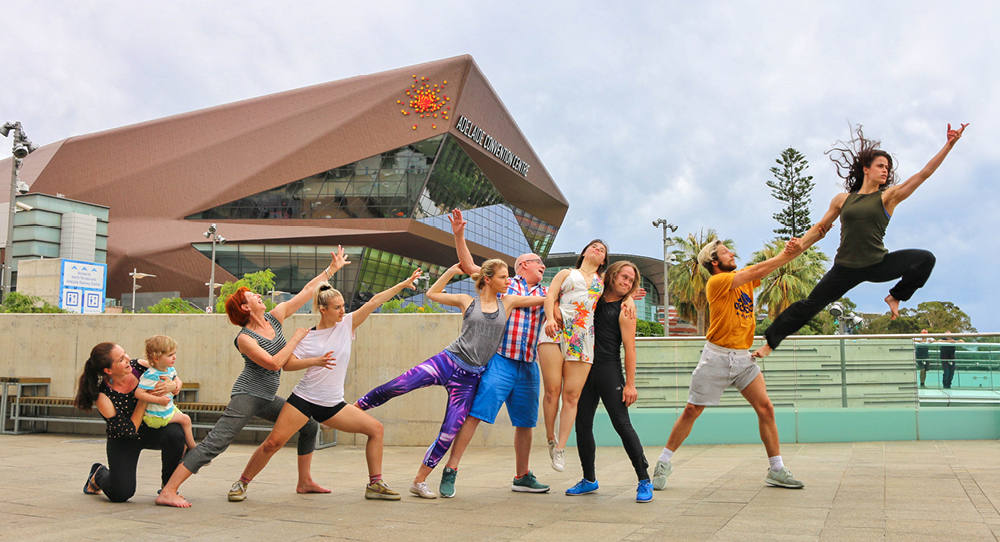 Adelaide is in for a treat this July when the second Joint Dance Congress, Panpapanpalya, comes to town.

Panpapanpalya (which you can learn to pronounce on the Joint Dance Congress website) is an Aborginal word that encompasses the four main themes of the Congress: dance, gathering, generations and learning.

Officially opening on Sunday, July 7, the congress will offer its participants opportunities to attend over 70 performances (by both local and international artists), participate in workshops, sit in on lectures and keynote presentations, and network with other dance artists, educators and enthusiasts from all over Australia and the world.

“This is a Congress that brings people together who are interested in dance,” says Jeff Meiners, convenor of the Congress and a lecturer in Arts Education at the University of South Australia. He says the Congress caters to “those who are interested in education and training, to choreographers and dancers, right through to school teachers who work with young people and then right down to babies and toddlers.”

Panpapanpalya is the joint venture of daCi (Dance and the Child International) and WDA (World Dance Alliance) Global Education and Training Network. Meiners began his involvement with these organisations in the late 1980s when he was teaching in schools in London. The first Joint Dance Congress was in Taiwan, at Taipei National University for the Arts in 2012. A massive 1,300 people attended, and it was considered a huge success. When a second Joint Dance Congress was proposed, Meiner headed the bid for Adelaide to host this incredibly important and thought provoking dance event.

“I thought that Adelaide was a great location because we’ve got Leigh Warren and Dancers, Stomping Ground Studios, The Mill and Australian Dance Theatre, for example,” states Meiners. “I really thought that it would be a good time to get everyone together.”

Another reason Adelaide won the bid “was that everything was within walking distance,” boasts Meiners. “We’re hosting it at the City West campus, so all the panels, all the lectures and presentations, will occur at Uni SA. We’re working with the Adelaide College of the Arts as a venue partner, which is just around the corner, and so all the performances and workshops will be hosted by them. And then we’ve got Leigh Warren Dance Hub just around the corner working with us, so there will be some workshops and performances put on there.”

Meiners adds, “Because of the proximity of City West to the new South Australian Health and Medical Research Institute, I approached SAHMRI. I thought they might be interested in a dance project, some kind of site-specific dance project. So they advised me to contact the Royal Adelaide Hospital, and Michelle Cripps, the director of the Centre of Creative Health at RAH, has come on board. They are going to be hosting a site-specific dance sharing performance of around 14 different groups in the hospital and SAHMRI called Dance Epidemic.”

Meiners has been working with an international committee of delegates from both organisations to organise this mammoth event. The committee comprises of Meiners, Ralph Buck from The University of Auckland representing the WDA, Susan Koff from New York Univeristy representing daCi and past President of daCi Ann Kipling Brown, who is acting as a mentor.

Back in Australia, working alongside Meiners is Congress Coordinator Julie Orchard and Marketing Manager Nichola Hall of the Royal Academy of Dance. Also, various divisions of Ausdance have all been working with Meiners and the committee to bring everything and everyone together.

“I approached Ausdance SA in 2015, when I had the idea and Jo McDonald, who was the President at the time, was very supportive,” Meiners explains. “So Ausdance SA are involved even though they are a voluntary organisation. Similarly, Ausdance National are involved, and they also lost their funding. So I’m really, really grateful for all the work the voluntary people are putting in.”

Ausdance Victoria and Ausdance NSW are also involved. They are behind Big Dance, which will be a part of the closing event on the last day of the Congress. Particpants will be able to learn the Big Dance, choreographed by Frances Rings and Craig Barry, throughout the week and then join in the performance on Friday, July 13.

When asked about how the Congress is being supported financially, Meiners comments, “Funding has been a real challenge and a real issue for us because neither of the international organisations are funded on a regular basis, so this is all done with very little funding. There’s a lot of goodwill and a lot of voluntary work. All the people working on committees are volunteers, and it’s been an amazing galvanising of the local dance community.”

There are also some very exciting Twinning Projects, connecting overseas dancers with Australian dancers. “We have a project called our Ugandan Project, because neither organisation has had much participation from Africa,” Meiners explains. “So one of the committees is raising funds to bring six young students from Uganda in their early teens and form a partnership with Thorndon Park Primary School. They will be working together to create dance and to share their experiences during the Congress.”

Every day of the Congress will be packed with world class content. Meiners says, “It’s open to anyone who is interested in dance. There’s going to be an early years program, a young people’s program and an adult program. There will be two evenings of performances of almost 70 pieces on the Monday and Tuesday at the Adelaide College of the Arts, short pieces of five to 10 minutes ranging in ages from the very young to the very elderly.”

He adds, “It’s always an amazing time for people, no matter what age, to come together and spend a week with each other and meet people from other countries. So for local people, it’s really important they see that this is happening in Adelaide and participate! It’s a very rich week long experience for people.”

A vital element throughout the Congress is the strong indigenous presence, which has been carried over from the first Congress in Taiwan. “I really wanted to honour the foundations of dance in Australia from indigenous people,” Meiners says. “So I went to Kaurna Warra Pintyanthi and spoke with Jack Buckskin, and he consulted with the Elders to come up with the word and name of the Congress ‘Panpapanpalya’.”

The opening event on Sunday, July 7 is being orchestrated by Kurruru Youth Performing Arts, who will be performing a traditional welcome in Victoria Square, followed by a smoking ceremony, and then everyone will move into the town hall for the welcome by the Governor, the dignitaries from the two organisations, the Lord Mayor of Adelaide and a delegate from Uni SA. This will be followed by some contemporary Aboriginal and Torres Strait Islander work. “We want everyone coming to the Congress to really understand that there’s not just one kind of aboriginal dance in Australia,” Meiners says.

Meiners is extremely excited about the keynote speakers the committee have engaged. The line-up consists of David McAllister AM, Robyn Archer AO, CdOAL, Sally Chance and Katie Dawson. “We wanted to have keynotes who are offering different perspectives on dance,” he says.

Panpapanpalya is also a part of the inaugural Adelaide Dance Festival. This means there will be a choice of dance performances available to Congress delegates and participants at a discount, including performances by Australian Dance Theatre, The Australian Ballet and Lina Limosani.

Now, with July so close on the horizon, Meiners says that it’s not too late to get involved. The committee is still on the lookout for volunteers, and anyone interested can email info@jointdancecongress2018.com.

It’s also not too late to purchase a ticket and join in on what’s shaping up to be an inspiring and informative, once-in-a-lifetime dance experience.

Thanks to the dedication and vision of Meiners, the committees, all the volunteers and the Congress partners, Adelaide is fortunate to be hosting and sharing the love of dance with the rest of the world right at their doorstep. This is an experience not to be missed!