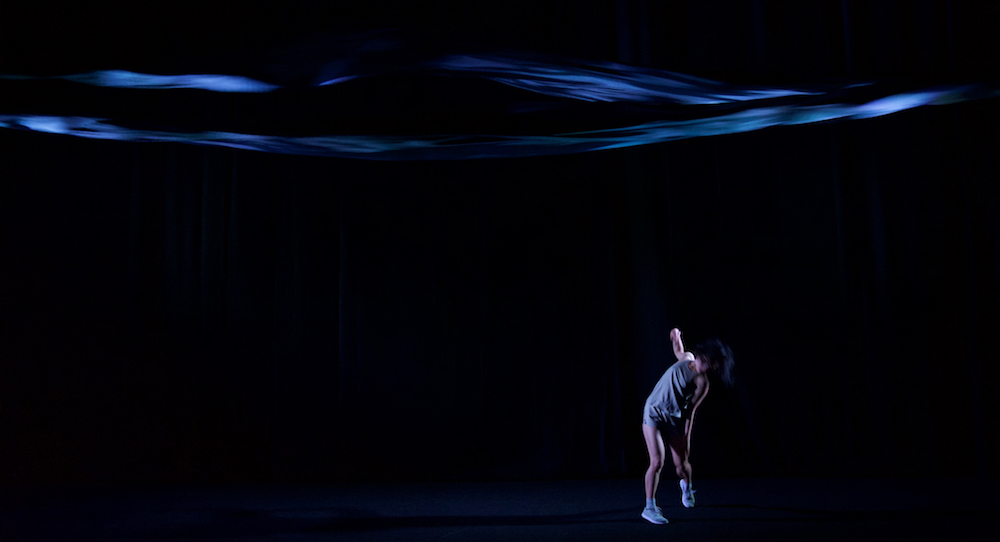 Yes, environment. No, not merely the reductionist narrative or narrow polemic of political theatre but the broader existential relationship we are all experiencing with the constantly morphing universe – as symbolised by the single body moving in time and space.

This, or something quite like it, nestles in both the sub-strata and the performance spectacle of Kristina Chan’s critically acclaimed solo work, A Faint Existence.

Speaking from her hometown of Sydney, the Hong Kong-born, multi award-winning dancer/choreographer ponders the return season of her 2016 hit and the forces that drove its initial creation. “It’s not about climate change, but it’s come from a personal response to this time of climate change,” she begins. “How are we within our environment? How are we affected by change, and how do we cause change? You know, it’s the whole thing of causality within the universe.”

Examined through the prism of dance, these questions are obviously addressed via the body, that singular and fragile vessel we all navigate the external terrain with. As Chan says, “Because it’s a solo work, it really looks at the individual body and how it deals with elemental forces and physical transformation.”

To prise open something as foundational as cause and effect is clearly more difficult in a solo piece than it would be otherwise. For this reason, Chan explains, staging elements play an even more vital role in A Faint Existence. “I’m really interested in working with sound, light and visual design right from the beginning, from the conception. So we build the show together. For me, it’s really important in my work that it’s not just about the dance…and then you come and light it afterwards, or find some music to fit. The light, the sound and the overall visuals create an environment for the dance to exist within.”

In keeping with the transformational themes of the work, these elements are deliberately “subtle and highly nuanced”, with muted segues and incremental variations. “Even if it’s barely noticeable, we’re working to create something that’s really palpable, that’s really felt,” she elaborates. “You walk into this space and you get transported into this other realm that is constantly shifting. There’s an organic nature to all of it. At least, that’s what I think we achieved last time.”

Indeed, when it makes its debut in the rarefied surrounds of the Sydney Opera House as part of the newly inaugurated UnWrapped season this May, A Faint Existence will not only be coming back to life but will happen hot on the heels of its own “sequel”. Chan notes with a smile in her voice that the second of her environmental trilogy, Mountain, will be staged just weeks prior at the Campbelltown Arts Centre in April.

“Mountain for me speaks to A Faint Existence,” Chan explains. “They both come from really similar starting points, looking at environmental change and transformation. It looks at the same kind of things but through a different lens.”

All of which makes the latter’s return season much more enticing for its creator. “It’s been a year-and-a-half, so it will have a different feel,” she enthuses. “The thing with live work is that it can keep living and breathing. It’s not something that’s set in stone, so we will definitely revisit some of these ideas and see if we can improve on them.”

Moreover, the second iteration of A Faint Existence, and its elevation to the Opera House, very much represents the future direction for a dancer who has already worked with a who’s who of contemporary dance and won Australian Dance and Helpmann Awards. As she readily admits, “Making this work was a real benchmark for me in, I guess, my career, or as my development as an artist; because even though I perform in the work, I have more interest in making work these days. So yeah, this year is actually quite full of choreographic work.”

In fact, aside from Existence and Mountain, Chan will return to her native Hong Kong later in the year to create a work for the renowned City Contemporary Dance Company (in collaboration with Brisbane’s Expressions Dance Company). Once again, it will focus on environmental themes, but, more than that, the experience will also allow her a window of time in which to explore her Cantonese heritage.

Recalling her childhood on these shores, she says, “My dad’s from Hong Kong, and I was born there; but I grew up in Sydney since I was one, I have a white Australian mother and, yeah, I just never really connected to Chinese culture, to my father’s heritage, purely because I guess he was just trying to assimilate here. So I’ve got six weeks coming up in Hong Kong, which is not only a really incredible opportunity for my choreographically, but I get to spend time in my birthplace and, hopefully, learn some basic language.”

As if manifesting the transformative motifs of A Faint Existence, 2018 promises to be a year of great flux and flow for the Australian/Cantonese dancemaker. She chuckles lightly at this parallel, before reminding herself, “Listen. Spend time listening.”