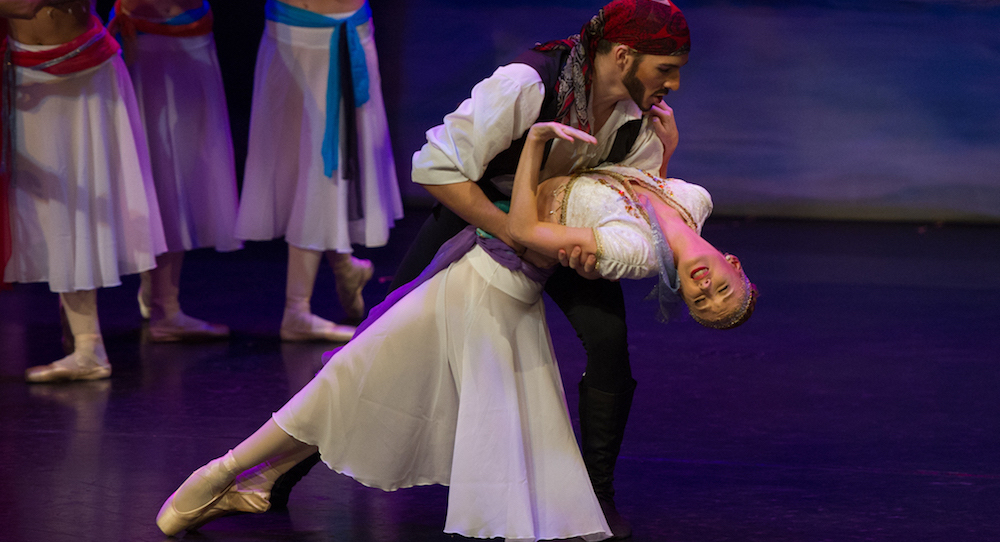 Never before staged by an Australian ballet company, Le Corsaire (“The Pirate’s Story”) will make its full-length Sydney debut by the Victorian State Ballet at The Concourse, Chatswood this 17 – 18 March.

Le Corsaire is a thrilling 19th century romantic classical ballet based on an 1814 poem The Corsair by Lord Byron. It is an exotic fable that follows the journey of Chief Pirate Conrad (William Douglas), as he searches for his beloved Medora (Rebekah Petty). Medora is in the hands of slave trader Lankendam (Michael Braun and Cieren Edinger), who later sells her to a Turkish Pasha (Anthony Craig) who wants Medora for his harem. With passion, danger, romance and adventure, the real hero of this production isn’t the narrative.

“Le Corsaire is not famous for its storyline, it is famous for the beautiful virtuosity that you see in the ballet dancers,” says Choreographer and Co-Artistic Director Michelle Sierra. “There are lots of different takes on this ballet, and what I like to focus on is the character of the Pascha who loves beautiful women. We have engaged a wonderful actor, Anthony Craig, to perform the role of the Pascha, and I’m focussing more on his humour so there is a light humourous feel that keeps it nice and entertaining.”

Le Corsaire is originally choreographed by Marius Petipa, and excerpts of his choreography from the story ballet are most often performed at galas around the world. With ballet enthusiasts having such reverence for his original choreography, Sierra was sure to stay true to his original work.

“When I produce a ballet, I always like to maintain the traditional classical ballet pas de deux and solos,” Sierra explains. “The Odalisques Pas de Trois, the dance of the three girls where they do an opening, a solo each and a finale, and the Grand Pas de Trois from the cave scene are the main sections that you see in gala performances today, and I maintained those absolutely 100 percent. I know the audience expects to see it, and it is brilliant and perfect as is. I rechoreographed the bazaar/market scene to bring out the storyline, so all the group work and some of the pirate work is rechoreographed and restaged.”

In the rehearsal studio, Sierra’s approach goes beyond ballet technique and learning steps. “First of all, I really get [the dancers] to understand the kind of character they are playing,” she says. “They need to know and understand the music. Most of them know the ballet, so that always helps, but there are lots of areas within the ballet that they might not know, so we get them familiar with the music and with the character they are portraying as they dance. It’s a matter of connecting those. I always let them know which versions of Le Corsaire I’m inspired by so they can see the pathway that we are going down. As we rehearse the steps, we will adjust speed, mood, feeling or the acting side of it.”

Le Corsaire is a ballet known for celebrating male dancers with highly technical solos that include big jumps, turns and lifts. According to Sierra, it’s pretty challenging for the male dancers in the company, especially for the dancers with main roles, as the choreography is very rigorous and they can never let their guard down and always need to be in character. One of the more physical scenes in the production is the big fight scene with Conrad and Birbanto, where after performing lifts with the female dancers, they are fighting with knives, which, according to Sierra, is physically demanding yet rewarding for those dancers.

One of the highlights of the ballet is the Pas de Trois that features Conrad, his slave Ali (Sean Williams) and Medora. “The combination of the way Petipa put those three together is what makes it so stunning, and with that gorgeous music and the way Medora goes from one partner to another is so smooth,” Sierra comments. “You’ve got absolutely everything there from big lifts, pirouettes, finger turns and promenades in arabesque. Then you have this incredible solo that Nureyev and Baryshnikov made famous, with tours (turns) in the air that have developed over the years to be incredible. Instead of one cabriole, it is two cabrioles. It is a personal thing, as each dancer is unique and different, and they will pull out their best and push the boundaries, and at a soloist and principal dancer level, the sky is the limit. It just keeps getting better and better, and that’s why it’s so beautiful.”

The musical score for this ballet boasts music from five different composers: Adolphe Adam, Riccardo Drigo, Leo Delibes, Cesare Pugni and Prince Oldenburg, which is unusual for ballets developed in the 19th century. Sierra spent a lot time going through the music ensuring the right pieces were chosen for this production.

“There are lots of different musical scores, so when it came to putting the ballet together, I really found that quite challenging,” she says. “All have something similar, yet they are all so different, and because the ballet story is so colourful, that’s where all the music blends well together. It really does work.”

One of the words Sierra has used to describe this production is “flamboyant”, and she says, “It’s really about the dancers being let off their leash to go overboard with their characters and technical ability. It doesn’t have any boundaries; the sky is the limit. The costumes are amazing, and I’ve used lots of strong, vibrant colours. I find that especially in the market place with people selling and buying, everything is shiny and colourful to attract attention, so we’ve used bright, vibrant colours in the costumes, and the tutus are just beautiful with the sequined bra tops and the tutu bottom. They are just gorgeous.”

For Sierra, it is a great honour for the Victorian State Ballet to be the first Australian ballet company to stage the full-length ballet of Le Corsaire. “We are really excited to do this, and it’s definitely a beautiful ballet, one that I’ve grown up with and I love and I believe suits the company very well,” she says. “It’s adventurous with pirates, treasures, caves, coves, beaches, beautiful maidens, palace, saving the day and happily ever afters. I think the audiences will be captivated by the flow and the incredible ballet technique and will love the overall entertaining feel from beginning to end.”

To book tickets to Victorian State Ballet’s Le Corsaire, to be presented 17 – 18 March, at The Concourse, Chatswood, visit www.theconcourse.com.au or www.ticketek.com.au.