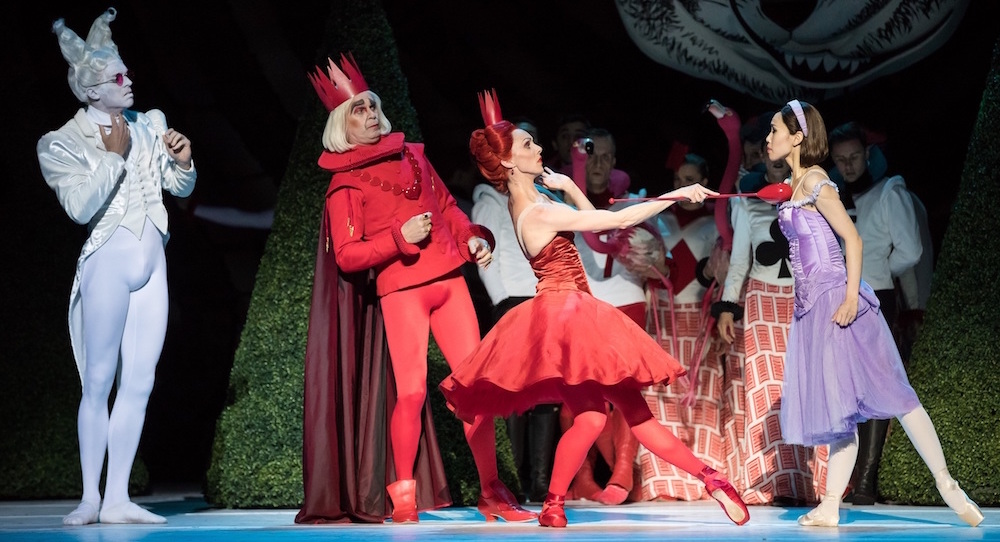 What spectacular Christmas fare to bring 2017 to an enchanting end. Christopher Wheeldon’s Alice in Wonderland is rumoured to be the biggest production The Australian Ballet has ever done. Bright, bold and colourful with some dazzling theatrical effects, it is visually stunning and showcases some wonderful dancing, and Wheeldon’s inspired, outstanding, at times very difficult and demanding choreography. Although perhaps best known in Australia for contemporary works like After the Rain, and the rapid-fire DGV: Danse a grande vitesse, here Wheeldon has dealt with the much loved story in a traditional classical structure, which is updated with comic segments and dramatic twists and comedic turns, giving it a contemporary atmosphere.

The audience on the night I attended absolutely loved it, with cheers and a partial standing ovation at the end. Having recently seen a screening of The Royal Ballet production, it is most interesting to compare a live version to a screened one and pick up on various previously unnoticed details.

The Opera Australia Orchestra under the dynamic baton of maestro Simon Thew was excellent, Joby Talbot’s energizing, atmospheric, catchy score propelling and complementing the action, with various leitmotifs for the assorted characters.

The long ballet possibly feels, at times, perhaps a little dominated by the set and visual design values rather than the narrative and being character driven, but it is a glorious feast for the eyes and full of delightful whimsy. There are perhaps hints and allusions to the “big three” of the Tchaikovsky/Petipa/Ivanov works in certain parts of Wheeldon’s choreography, particularly in some of the pas de deux for Alice and Jack/The Knave of Hearts and the wickedly delightful Queen of Hearts burlesque of the Rose Adagio that had the audience in fits of laughter.

The ballet begins by introducing all the cast at a posh garden party where Alice’s mother dismisses the under-gardener, Jack (Jarryd Madden), for stealing a jam tart. (He is in fact innocent.) This leads to heartbroken tears from young Alice (Rina Nemoto) – presented as a bit older than in the book – who was rather hoping to see him later for a tryst. Madden dances most impressively as The Knave of Hearts/Jack. Alice’s home is also visited by the “real” Lewis Carroll (that is, Charles Dodgson, who becomes the White Rabbit) and by other characters who will later reappear in Wonderland.

As Alice, Nemoto is delightfully spontaneous and endearing, courageous and rather earnestly strong willed. As Jack/The Knave of Hearts, Madden is dashing and charming with scintillating technique, an excellent partner and rather bewildered by the trumped up charges against him.

The frenzied, rather threatening sausage-making scene in the lethal Cook’s (Corey Herbert) kitchen, with the Duchess (Tristan Message) and crying baby could have come out of Sweeney Todd, and the axe-wielding psychotic madness of the Queen of Hearts (Lana Jones) creates a real sense of frenzied terror. At times, the audience is transported and absorbed completely in the rather surreal Carroll universe, which follows the dreamlike narrative and its nonsense-cum-logical progression with remarkable fidelity. Jones as the tyrannical, malignant scene stealing Queen of Hearts was brilliant, and there was a somewhat angular pastiche of the Rose Adagio from Sleeping Beauty with her four “suitors”, perhaps in the style of Les Ballets Trockadero. The gentle, lugubrious old King of Hearts (ex-premier danseur Stephen Heathcote) is perhaps presented as cousin to the Red King in de Valois’ Checkmate. The horrid Duchess, as portrayed by Tristan Message, could possibly have stepped out of Victorian pantomime.

I thought Brett Simon as the hesitant, scared and rather skittish courtier of the White Rabbit/Lewis Carroll was excellent and extremely stylish in his elegant white satin suit, looking a bit like Elton John in those tinted glasses. He has incredible, soft bouncy pas de chats at one point, beautifully performed, and it is pleasing to see how he helps Alice and The Knave hide from the Queen.

While Drew Hedditch was coldly exuberant as the scheming Mad Hatter with his dynamic, colourful tap shoes and rather glittering style, sorry, but I prefer Steven McRae’s interpretation for The Royal Ballet, which for me has more charisma and sparkle. The Mad Hatter has an exuberant, showy duet with Alice. The strange tea party with the March Hare (Joe Chapman) was excellently performed with the poor sleepy dormouse (petite Yuumi Yamada) ending up in a giant cup. And I loved the sponge cake (with a hidden inbuilt trampoline Alice uses).

Act II’s waltz of the flowers in the garden is a delightful homage to the traditional Petipa story ballets, with Crowley’s floral, light and fluffy costumes full of pleasing spring colours. (Yet I found the length of the men’s coats rather awkward). And how exciting in Act I when they burst in for a brief moment through the audience in the stalls! Special mention must also be made of the enchanting (dis)appearances of the impish, playful Cheshire Cat, brilliantly conceived, with its koken-like puppeteers as it mysteriously appears and vanishes. A later segment is a tribute to the angular precision of modern dance, with the corps de ballet as a deck of cards (think sort of maybe Stanton Welch’s Divergence).

The rich, slinky, sinuously rippling sensuality of The Caterpillar (Brodie James) and his followers was a delightful piece of exotic kitsch with allusions to The Nutcracker. And I loved the blue pointe shoes, especially encrusted with diamonds!

And I mustn’t forget the fish and frog footmen (George-Murray Nightingale and Luke Marchant), who are fabulously costumed, or the wonderful flamingos and hedgehogs of the croquet game.

Toward the end, there is a lyrical, flowing and romantic pas de deux between Alice and The Knave of Hearts. And I loved the return, at the end, to the “real” world of current, contemporary Oxford.