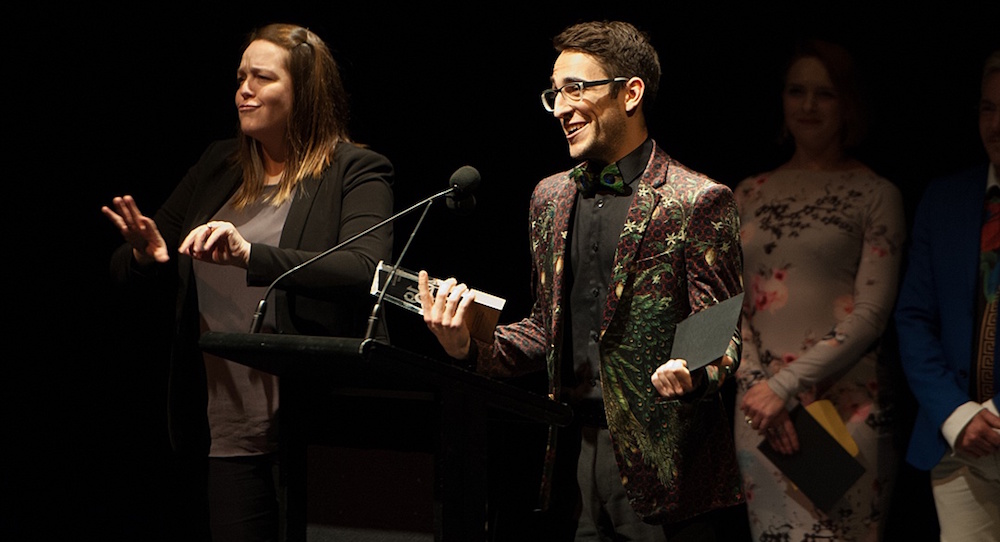 The Australian Dance Awards were a star-studded night of all that’s great about Australian dance -creativity, diversity and collaboration. Held at the Arts Centre Melbourne’s Playhouse, followed by a “buzzing” party at Bombini Buzz, the industry came together to celebrate in style.

What is it about The Dark Chorus that you think garnered attention and another award for you?

“I think it was a surprise for people in some ways, as it was quite a moody and dramatic work, whereas a lot of my choreography is not so emotive. I think the costumes were actually a huge part of it, and just the concept of this very minimal, contemporary, white-costumed, strange vocabulary contrasted with these very recognisable figures from literature or history. For me, that was one of the most interesting parts of the work – this sort of juxtaposition. And also just these two extremes. I think that speaking about the extremism that we’re facing in this world today is also a quite motivating idea in the work.”

How does it feel to win another award?

“It’s a big thrill! It’s very exciting because we’ve won a few awards lately. I am very happy! And you know, it’s really a hugely collaborative effort, this work. I think every element of the work was really exceptional.”

How does it feel to win an Australian Dance Award?

“It’s just a real thrill and a real surprise. I’m never thinking about awards when I do what I do, because I love what I do so much. It’s so nice to have people recognise and show an appreciation for what I do. It just feels real lovely, and I’m a bit in shock really.

What do you think it is about your performance in Singin’ in the Rain that really caught the eye of the panel?

“With the era of the 1920s that Singin’ in the Rain is from, the Gene Kelly era of movies, MGM movies…that style of dancing is really comfortable for me and is a really easy place for me to go emotionally. So, I feel like that show is right for me physically and also mentally. And it was a joyful show. Cosmo in particular is a funny man, and his aim was to make people smile and laugh. There’s nothing more of a joy for me to have people laugh and smile and enjoy the show.”

Congratulations! How does it feel to be awarded after all those years of sewing and designing and ironing and washing and…

“It’s fantastic. To be recognised by my own peers…that’s the best thing!” 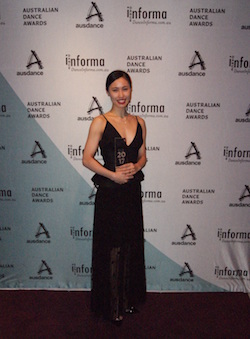 Ako Kondo of The Australian Ballet. Photo by Dance Informa.

Were you expecting to win?

“No, not at all. I was shocked, but happy because my fiancé was there and my Artistic Director was there, so it was all very special for me. And it’s even more special because I am an international dancer. I’ve been living in Australia for 10 years; this year marks 10 years for me. Receiving this award from the Australian organisation has made me feel welcome and recognised as an Australian performer.”

What do you think it was about your portrayal of Coppélia that really caught the attention of the people?

“I guess the dedication to the work that I put in and the entertainment on stage for the audience. The most important thing to me while dancing is to engage with the audience.”

What does it mean to you to win an Australian Dance Award?

Daniel Riley: “We lost our Songman last year, so that knocked us around. It’s been a rough year for Bangarra, so to win this was really an amazing achievement as a company of 16 – to lose someone so important to us, yet pull off a triple bill like we did last year. And for how important the tour was, and how strong the tour was, and to get this recognition from our brothers and sisters in the arts community is really important and really amazing. We’re thrilled.”

What do you think it is about this particular work that struck a chord with people? 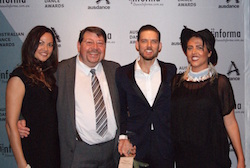 “I think it was the breadth of stories. It was a triple bill — three different works from three different Aboriginal nations. You had three different ideas and three different cultural consultants. It’s the relationships that we build with country and community and how we sink ourselves into country and these communities to embolden them to continue to tell stories. For the younger generation to connect to their culture. You know, to know that culture is not dead; culture won’t die. It was just an amazing year considering what we went through. It’s the strength of our company, the strength of our board, our supporters, all of our creative team, everybody that really put in and who’s really Bangarra — Bangarra family — it’s really a testament to that.”

What does it mean to you to win an Australian Dance Award?

“Oh, it’s huge. It’s the pentacle of dance really, isn’t it? Australian dance is really strong and the awards are very particular, so this is huge.”

What do you think the dancers who were involved are going to think about this award?

“I hope they’re pleased. It only happens because of them. CDT isn’t funded, so they pay for everything that they do, which is really remarkable. And, you know, it’s their award. Yeah, I directed it and stuff, but it’s their award. They did it. They came to the rehearsals. They gave it life. They embodied all these different characters. And then the Parkinson’s dancers just stepped out of themselves completely. It’s remarkable.”

For the full list of winners, view our recap article here.