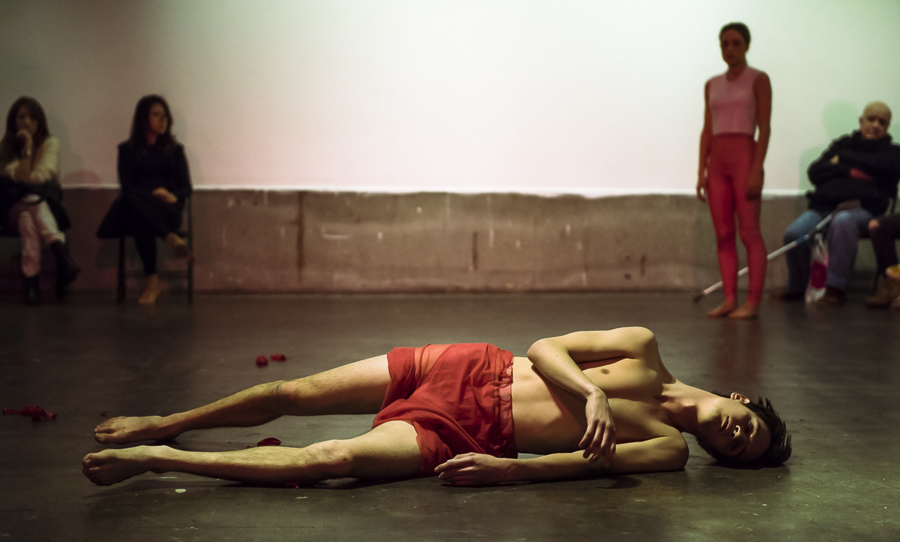 By winning the Best Dance Award at last year’s Melbourne Fringe, Nebahat Erpolat set a high bar for 2017’s festival offering. However, with Shop I Am, the goods, so to speak, are well and truly delivered. 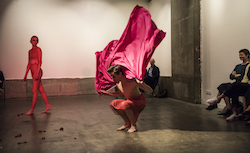 ‘Shop I Am’. Photo by Gregory Lorenzutti.

Locating the work in a bare gallery space, dispensing with the neat delineations of stage and auditorium and welcoming us to the work with the sight of a topless girl slowly being shrouded in balloons barely hints at the layered conceptual complexity to come. Indeed, even the increasingly dramatic arc and the bold, energised performances of Emma Riches and Benjamin Hurley aren’t enough to contain the work. Why? Because Erpolat’s decision to remove the perimeter fence that normally encloses the theatre spectacle and allow the happenstance of the outside world to spill into the work means that the cast of Shop I Am includes not simply two dancers but the nominative audience and, to some extent, random passersby.

Having set out to investigate fashion and its relation to socially sanctioned identity roles, it makes sense that the work takes place in a bustling central city shopping precinct (QV in Melbourne). In addition, the venue’s big “shop windows” mean that both audience and performers are clearly visible from the outside and, in fact, several people did stop to watch, effectively making all those inside the gallery items of display. Commodities to be perused. Exhibits to be appraised.

But it doesn’t stop there. For just as the sounds of laughing babies, passing cars and people speaking into their phones are allowed to penetrate the performance space, so, too, we are permitted to watch the world outside. At one point, as Riches is lying prone, her reflected body can be seen in the window, strewn on the pavement being walked over. The ghost of a dancer, unnoticed and untouched by the busy river of the living. Existing both amongst them and yet in a kind of diaphanous exile. 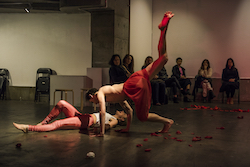 ‘Shop I Am’. Photo by Gregory Lorenzutti.

These and other serendipities feed beautifully into the work, and, as Hurley and Riches up the tempo, moving from quiet and austere subtlety to frenetic, splenetic expression Erpolat’s dextrous and clever teasing apart of the fashion fetish becomes a moment to ponder the effects of capitalism and commodity culture on the way we perceive and interact with ourselves and others. At the end, as we linger in the breathless afterglow, we are left to regard ourselves as we might the shiny objects in a shop window. What is it we are buying? Selling?

All of this taken together, along with Erpolat’s careful construction and the dancers’ sheer physical commitment, make Shop I Am a more than worthy successor to last year’s award winning Emptying The Bucket. It is also one the smartest, bravest uses of the “site-specific” meme I have encountered. With its multiple layers and daring elimination of the “silo of theatre”, it manages to bring us not merely close to the work but to slyly insert us and the QV crowds right into the heart of the matter.