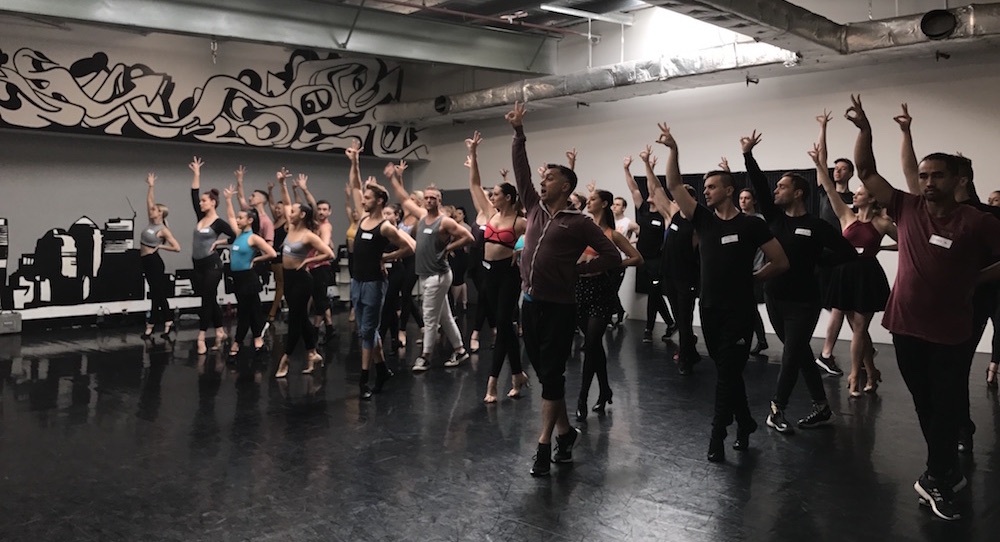 It’s the dream of so many dancers to be in major musical, especially one that’s as beloved as The Wizard of Oz. With only 25 roles available, including Dorothy, Scarecrow, Tin Man, Lion and ensemble, and over 1,500 applications from every state in Australia, the competition to secure a job of a lifetime is intense.

The studio is filled with excitement and nervous anticipation as a group of hopefuls filed in for the first round of Sydney auditions. Associate Choreographer Richard Roe facilitated the dance auditions and introduces the style of choreography as “Art Deco, where you can imagine the men dancing with canes and the ladies with fans.” He teaches a short choreographed routine with a pianist accompaniment, and the dancers are soon called in groups of four to perform for the panel but not without a helpful tip from Roe: “Remember, it’s a party, not a funeral!” According to Co-Producer Suzanne Jones, who was on the audition panel, “We want them to spark and pop. We want them to be excited. We need them to be very good dancers, really good singers and really good actors. Proper triple threats.” Of the 40 dancers who auditioned in this group, 23 were chosen to move forward in the audition process to the singing audition. Dance Informa caught up with three of those successful dancers.

How long have you been dancing, and where did you study?’

“I started at the age of three. I went to K&V Dance Corp and then studied at Brent Street full time.”

“No, not yet. I would love to be, so this is really exciting for me.”

Why did you decide to audition for this musical?

“I love The Wizard of Oz, and I love musical theatre. I’ve done a lot of travel and I’ve been overseas for awhile, so I thought it was time to come back to Australia, as it’s my dream to be in a musical here.”

“The dance call wasn’t as long as I thought it would be, but it was challenging because it was very stylised, very precise, and they knew what they were looking for. It was very specific, so I thought that was very challenging.”

What has been the audition process so far?

“We’ve had the dance call, and we’re about to go in for our singing call. We’ve been told to prepare one song, so I’m singing ‘Broadway Baby’ from Follies.”

“I got up and did my full warm-up, and I’ve been working hard with my singing teacher to prepare my song for today. I just warmed up my body before I went in and made sure I was calm and confident.”

“Good. I’m still nervous, but I’m excited that I get a chance to sing now and move on to the next part of the audition.”

“I think you learn so much every time you audition. It’s extra performance time, extra time to get in front of different people, and you get more confident with every audition that you do, so it helps with the nerves each time.”

How long have you been dancing, and where did you study?’

“I have not. This is my first Australian musical if I do get it, fingers crossed, and it will just be amazing, and it’s one tick in the box moving toward my goal career.”

“I wouldn’t say easy, as nothing is ever easy in life. I felt very comfortable in the choreography, and hopefully I get another callback.”

“Rigorous work! I made sure I brought all of the sheet music with me. We only have to sing one song today, but I brought four pieces just in case I need it. I came here an hour before to make sure I was well warmed up and that I had eaten correctly and that I was well hydrated because you never know in these high pressure situations what can happen.”

“I feel a little relieved that’s one down, and now in to the singing where you can get up close and personal with the panel and have a good laugh with them and a bit of rapport.”

“Have fun and let loose. Success is a man-made thing; it’s all internal. Just do your best, and have fun!”

How long have you been dancing and where did you study?’

“I’ve been dancing for 23 years and studied at ED5 International Sydney.”

“No, I haven’t. I’ve done Sydney Showboats for the last 18 months.”

Why did you decide to audition for this show?

“I would love to do a musical. It’s a dream of mine, and The Wizard of Oz is up there!”

“Easier, but sometimes simple can be a bit more tricky.”

“I made sure I practiced my song because that’s where I’m most nervous.”

“Relieved and excited but nervous still for singing.”

“To smile and not think about things too much.”