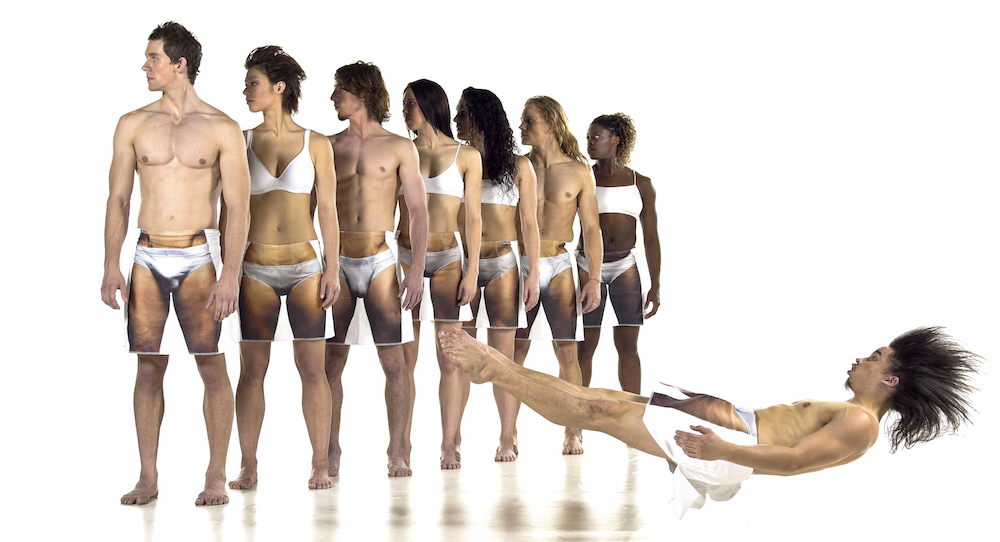 Melbourne audiences are in for a treat as Australian Dance Theatre (ADT), in partnership with Melbourne Theatre Company, presents the exhilarating physical dance theatre experience that is Be Your Self, to be presented 2-5 August.

This work will stimulate your senses and your conversations as you watch the dancers perform extraordinary physical feats, hear and feel the visceral pulses of the sound score, and witness the striking starkness and ingenuity of the costumes and set.

ADT dancer Matte Roffe believes the Melbourne audience will “love the sheer physicality of the work and the fact that it comes from philosophical, scientific and spiritual research.” Roffe puts it perfectly when he says Be Your Self is “very dramatic. And once that music starts and people sit there for the very first time, they’re in for a ride.”

Be Your Self was ADT Artistic Director Garry Stewart’s first foray into the realm of dance theatre. He says that the works he created prior to and after Be Your Self were and have been more abstract. In fact, ADT’s abstract and highly physical works have become Stewart’s signature, and perhaps this is one of the reasons this work is such a standout piece in the ADT repertoire.

Be Your Self was the first work Stewart made about trying to express ideas about the self and emotions and how we as humans interact with each other on both an emotional and psychological level. “It was an area of dance I hadn’t entered into before,” he shares. “It was very, very challenging.”

Stewart says that he has not made something like it since, but due to the incredible amount of research that went into the creation of the work, Be Your Self has helped to inform two other works in the ADT repertoire, Proximity and Objekt.

Excited about remounting Be Your Self, Stewart says, “It certainly is a work that has evolved each time it’s mounted. I shift and change things, which keeps it alive. It’s not a dead historical work, which is really important to me.”

Roffe has performed Be Your Self in the past, and he says he loves the fact that the piece changes and evolves each time it is remounted. “It’s really great coming back to a work that you’ve done before. As an artist, you’re always maturing every year, and your perception of how you view your body and how you think while you are dancing changes, so you are approaching it from a different point of view.”

This could be one of the reasons this work has garnered so much interest over the years. Not only does the choreography explore what it means to be yourself, but the dancers are also exploring what it means to be themselves on a whole new level each time they perform the work.

Roffe says, “The exciting thing about Garry’s work is that it’s so layered, so layered physically, mentally and emotionally. He really puts a lot of research into his work, so there’s always so much to explore, even when you’ve done the piece before and you come back to it. You’re always finding new things.”

When asked if Be Your Self is still relevant seven years after it was first created, Stewart says, “It remains to be relevant because it’s about the nature of the self, and that’s sort of an ongoing kind of question about who we are and what are we.”

He continues, “One of the things I was interested in was placing the body at the centre of the notion of selfhood. Normally, we think of the self, and we think of the mind. And in some ways, the body has been put in a second tier position in the discussion of feelings. But the body is very central to how we constitute feelings. It’s the body in its totality that constructs the emotion.”

Stewart explains that he wanted to create a work that explores and reframes the way “we look at ourselves and look at the body. The work starts off by questioning, ‘Is the body the self, or is it a set of neurochemical processes that produce emotions, or is it ourselves as social beings, how we relate to each other and respond to each other psychologically and emotionally?'”

As well as the element of dance, Be Your Self incorporates the full sensory sound score by sound designer Brendan Woithe (KLANG) and the elegant and innovative set design by New York architectural firm Diller Scofidio + Renfro. There are also the extraordinary contributions by lighting designer Damien Cooper, video design by Brenton Kempster and costumes by Gaelle Mellis.

Be Your Self also features an acting role that Stewart describes as “an enormous challenge, requiring a lot of energy and a lot of focus.”

Actor Cathy Adamek, who joins ADT for the first time, explains, “There are five dense speeches I have to rote learn. The speeches are full of abstract, anatomical, psychological detail that has to be delivered rapid fire. Apparently, audiences sometimes think it’s a prerecording because they can’t believe someone is delivering that kind of text live!”

Be Your Self is an exciting and challenging piece of dance theatre for all the performers involved, but connecting with the audience is Roffe’s main goal. He says he loves the pure physicality of the piece, as well as bringing the audience along for a journey with him. “You do want to be honest and authentic with the audience; they can tell if you’re putting it on. That’s the great thing about live theatre, you can be completely honest with yourself and everyone will get a lot out of it.”

Don’t miss out on a chance to Be Your Self! Click here to book your tickets now. Be Your Self will also be touring regionally around Victoria, New South Wales and Queensland. Visit www.adt.org.au/current for more details.