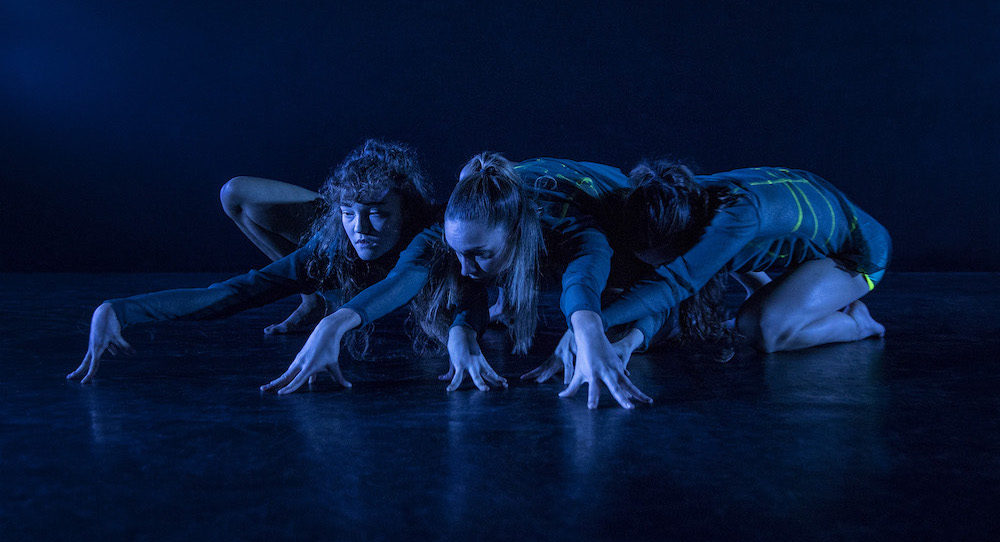 “Everyone tries their best to be a good person — but sometimes, we let the little things get to us. We behave in a way that’s a little less than ideal.”

Limitless Dance Company returned after a successful debut season in May 2016, to bring us the world premiere of SE7EN. The work was apparently based on the idea of the Seven Deadly Sins (Gluttony, Pride, Sloth, Greed, Lust, Anger and Envy), but this was not really made terribly clear.

Artistic Director Mitchell Turnbull’s costume designs were slinky and fabulous and, depending on the lighting, changed colour so could be blue or green, for example, and there was some striking use of UV lighting as well, which gave yet a different lighting effect for the stripes on the costumes. The men were barechested and wore long pants; the women wore a nifty set of briefs and bra outlined by reflective tape and a long-sleeved, semi-transparent, lacy top.

Speaking of lighting, SE7EN opened in darkness, and then there were flowing rolling lights that ebbed toward the audience (a searchlight of one’s conscience?). Also, there was some glorious red and golden lighting effects at times, as well as use of circles of light and rectangular corridors of light.

The 11 terrific dancers (nine women, two men) moved as one in a crowd, apparently not really connecting in any real or intimate sense with one another, embodying the estrangement of being alone in a densely inhabited world. Yet there were occasional tender moments of mutual connection.

Choreographically, Turnbull created lots of the work for the full ensemble (or almost), undulating, swirling, pulsating, grounded sculptural mass movement with flashes of most exciting solos. A very flexible lower back was required with laser sharp, long stretched legs for a long line. Arms were mostly fluid but could be angular. There was a lot of repeated stylized choreography at times, especially of particular hand movements and/or fragments of choreography. After the first section, there was a segment when the dancers all clutched and pulled at their face, as if being transformed into aliens (transformed into devils for the rest of the work?). Some of the pas de deux, trios and group work were amazing, with unusual lifts that were quite demanding. The dancing was amazing and sizzled. Turnbull’s choreography also included rippling torsos and lots of slithering or rolling, vigorous floorwork, energetically and crisply performed by the cast of 11.

One segment was about unclear mis-communication with a dancer (or two), frantically trying to tell us something, but the recorded voice-over was all jumbled and muffled. What was the section with the laughing solo about? (Pride at survival? But when was laughing declared sinful?) And why was there the repeated clutching at the stomach segment? (Overdone gluttony perhaps?) Ballet gets an ironic send-up with five dancers wonderfully performing a set enchainment, yet we see as well how they dangerously trip/pull/kick one another. The audience loved it.