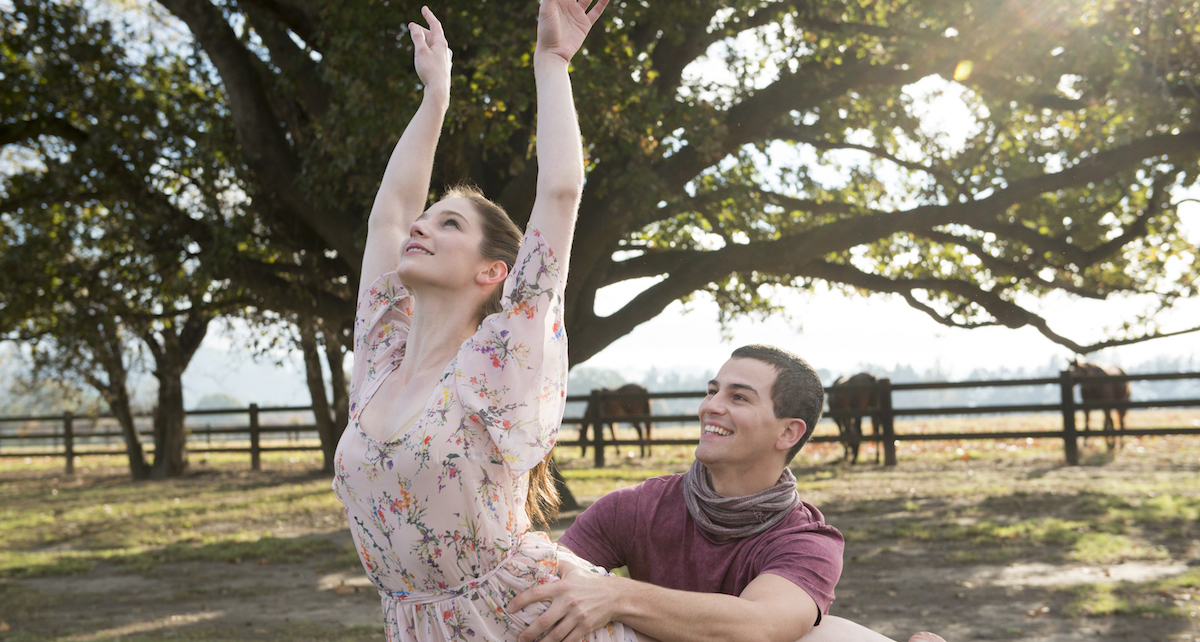 Xenia Goodwin was just 15 when she won the part of Tara Webster in ABC’s Dance Academy. And now, at 22, she’s the star of the film version of the hugely popular series.

Like most performers, she finds it hard to truly appreciate her own work, even going so far as to say, “I’ve hated everything I’ve ever done.” When it comes to the Dance Academy movie, however, she couldn’t be happier.

“I’m exceptionally proud of it, which is a bit bizarre for me,” Goodwin shares. “For the first time in my life, I know I couldn’t have done any part of it any better. I feel like I could not have worked harder. ”

Of course, Goodwin’s been working pretty hard for awhile now. Her dance training started at age nine, at Sydney’s Valerie Jenkins Academy of Ballet. She achieved honours in all her Cecchetti exams, won numerous state scholarships, and was accepted into the full-time program at the Tanya Pearson Classical Coaching Academy in 2009. In between filming the Dance Academy series and the movie, she’s been doing as much ballet training as possible, completing her Advanced examinations along the way.

But, although she says she’ll “never stop dancing”, it’s acting now that is Goodwin’s main focus.

“I came to realise that all arts drive for the same effect: releasing emotion, giving us an excuse to talk about something, bringing people together, teaching,” she says. “Acting, and also writing – perhaps even more so – can do that in a less abstract manner at times than ballet.”

The transition from the traditional dream of a ballet career and onto a different path is an idea that’s explored in the Dance Academy movie, which picks up 18 months after the TV series finale. Tara is struggling to live a “normal” life away from ballet, having had her hopes of a ballet career crushed due to serious injury. Now, she is given a chance to pursue her dreams again, and embarks on what most believe is an impossible mission. On her journey, which takes her to New York and Texas, she finds her dreams shift and change, before finding where she truly belongs.

Tara’s identity crisis, of sorts, is one that will resonate with dancers – and people – of all ages. Particularly in the world of ballet, there is often a perception that achieving anything other than the classical company dream is a kind of failure. Also explored in the film is the possibility that, upon achieving the dream, we might find it’s not what we thought it would be; and where does that leave us?

“Don’t be frightened of the feelings,” advises Goodwin to any dancers experiencing a similar story. “It’s a natural part of life; I don’t think it ever stops. You’ll question constantly whether you’re doing the right thing. Just don’t just give up. Keep doing it, and eventually it will speak to you. The thing you’re doing will love you back if it’s something you’re passionate about.”

While she hasn’t ruled out the possibility of a pure dance job somewhere in the future, Goodwin “loved every minute” of her first feature film experience and is looking forward to doing more. “I would really like to get my hands on darker, scarier roles,” she admits. “I find them fascinating.”

For those looking to follow in her footsteps, she advises to do some online research to find auditions and submit self-tapes. “Re-film scenes you love, shoot monologues,” she suggests. “It can be scary, but 20 seconds of courage might be all it takes.”

And for now, go see Dance Academy, to inspire you. You won’t only be inspired by the story and the characters’ journeys, you’ll be inspired by the progress of a humble, hard-working young Australian dancer-actor who is following her dreams, whatever they turn out to be.