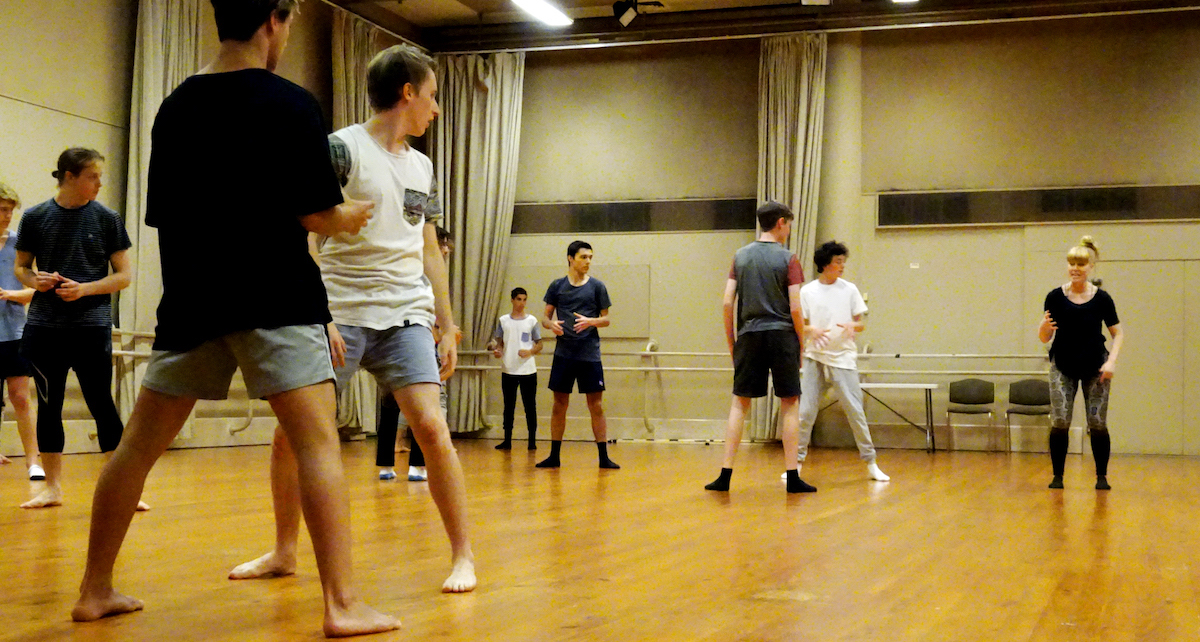 A warm Saturday morning in February. A rehearsal room deep in the catacombs of the Melbourne Arts Centre. A group of boys gather. Nervous, not really talking to one another. A new adventure is slowly taking shape. In less than a month, some of them may find themselves on the State Theatre stage, where their journey will truly begin.

Welcome to the final workshop session for the ambitious, Australian exclusive production of Lord Of The Flies. Far from being the process we typically associate with the pre-production phase of a mainstage show, however, this is the culmination of a state-wide, grassroots outreach programme aimed at getting young boys into dance — a process that began years ago in the UK with Sir Matthew Bourne.

Kyall Shanks leads the ‘Lord of the Flies’ workshop. Photo by Paul Ransom.

The much loved, multi-award-winning choreographer and director who created the UK’s most high-profile dance theatre company (Matthew Bourne’s New Adventures) in 2002 then added a charitable arm in 2008 called Re:Bourne. It is under this umbrella that the Melbourne production of Lord Of The Flies began its search for 23 young boys to star alongside a professional cast of six when the show debuts in April.

And this is how Dance Informa found itself in a room with a bunch of shy teenagers, two Community Dance Artists (Holly Durant and Kyall Shanks), and one proud Participation Producer (Kyle Kremerskothen).

Although the workshop we find ourselves in does have a pre-audition agenda, its aim exceeds the bounds of a one-off show or a star search process. “This show has come out of the desire to encourage boys to participate in the arts, and dance in particular,” Kremerskothen explains. “In general, there’s probably still a lot of stigma around regarding males’ participation in dance, so I think that projects like this are really important in re-framing that.”

As the Participation Producer, his role has been to get out into schools and communities where either funding or culture prevents young boys having access to performing arts. For the one time professional dancer (Ballet Lab, Lucy Guerin Inc), this process has taken on a strongly personal dimension. “It’s not a dissimilar story to my background,” he reveals. “I grew up in a regional centre, and I started dancing quite late, by chance, and then I danced professionally for quite a few years. Projects like this are very personally important to me, especially to encourage young boys to re-frame how they see dance and participation in dance.”

Meanwhile, the gathered boys are ready to start work with Durant and Shanks. “We’re going to do a little bit of a warm-up class, nothing too crazy, and then teach you a little bit more of the show and tell you about the process if you’re interested in taking it further and auditioning for the show,” announces Durant.

Of course, alongside all this is the delicious irony of Lord Of The Flies itself. William Golding’s 1954 novel tells the tale of a group of educated pre-pubescent boys stranded on an island and forced by circumstance to self-govern and survive. What follows is a spiral from middle class English niceness into a more primal and tribal state. Although the show moves the action from a Pacific island to a theatre, and tells the story without text, the same brutal mechanics are in operation. Of course, anyone who has worked in the performing arts will most likely, in their more honest moments, describe the theatre as a similarly competitive and hierarchical domain.

Kremerskothen acknowledges the parallels with a wry smile, before adding, “The boys whom we’ve seen along the way have time and time again exceeded all expectations, in terms of how they engage with the work itself but also with the new experience of contemporary dance. And you know, they’ve engaged with each other, which is really, really nice to see. There’s been no full devolution into savagery yet.”

Out on the floor, as the boys are put through their paces, it becomes apparent that there is indeed a vast range of ability on display. It is also evident that the workshop leaders, Durant and Shanks, are not so much talent scouting as genuinely trying to switch the boys onto some of the deeper values of dance and performance — values that centre on participation, co-operation and experimentation.

As a member of the professional cast, dancer Shanks is also keen to mentor the boys in the inescapable performative and qualitative aspects. “This workshop is a little bit more prepped,” he warns them. “It will give you a bit more of an idea of what will happen at the audition.”

Holly Durant leads the ‘Lord of the Flies’ workshop. Photo by Paul Ransom.

Together with Durant (who will also be the rehearsal director for any of the boys who make it through), he teaches them a couple of sequences from the show. Here again, the huge discrepancies in dance talent stand out. Two boys in particular are clearly trained or exceptionally gifted, while others are obviously struggling.

Yet this does take away from the broader outreach aims of the production. As Kremerskothen notes, “The aim is to get a range of experiences in there. You know, the young ensemble is made of three sub-sets — smalls, mids and bigs — but what’s great about that is that there’s a blurring of those people who have not danced before into the professional cast. It’s not ‘here’s the show with the professionals and here’s the section with the kids’; it’s more of a blurred mix, and a lot of the time you can’t tell who’s who.”

In its very process, Bourne’s Lord Of The Flies is offering up a starkly different vision of young boys working together than Golding’s. “To see the boys all working together, dancing, learning, it’s been a really heartening experience for me,” Kremerskothen concludes.

On a warm Saturday morning in February, in a rehearsal room at the Arts Centre in Melbourne, it is very hard to argue with that.

Matthew Bourne’s Lord of the Flies will be presented at Arts Centre Melbourne 5 – 9 April. For more information and to book tickets, visit www.artscentremelbourne.com.au/whats-on/2016/dance/lord-of-the-flies.