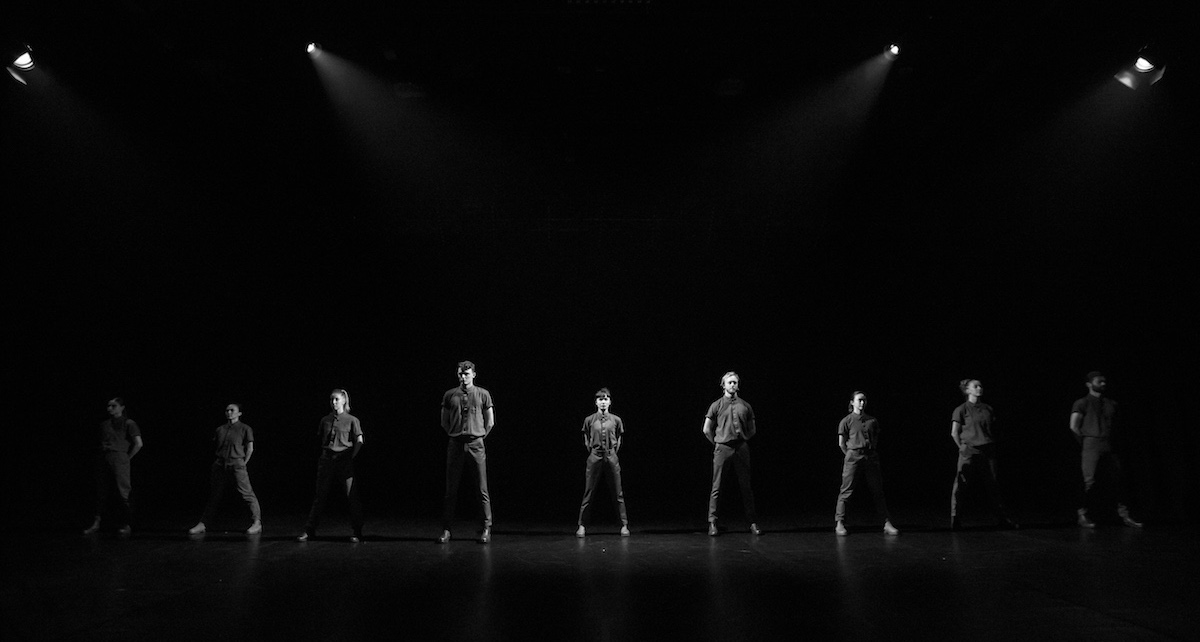 The current season of New Breed by Sydney Dance Company (SDC) features four exciting, challenging works showcasing some sensational choreography and stellar dancing. The fearless dancers were amazing. They appeared to be boneless in some sections and threw themselves with great power, passion and commitment into the assorted works. The programme is curated by SDC Artistic Director Rafael Bonachela.

Jesse Scales’ ‘What You See’. Photo by Pedro Greig.

First was Jesse Scales’ What You See. It had a small cast of three dressed in blue tops, shorts and socks. Music was by Max Richter – rain and tempestuous piano music. Each of the three dancers had mesmerizing solos. Cass Mortimer Eipper’s electric solo required a very loose but extremely controlled upper body and an idiosyncratic use of épaulement. Rolling floorwork and occasional twitches were  included. It was as if he was a restless insomniac and exploded in space. Nelson Earl’s solo was full of small, questioning, repeated movements. It also included mask-like change of facial expression. And Latisha Sparks’ solo required extensive anxious walking, as if looking for something, and a clock-like whirring of angular arms. The trios were explosively powerful at points, and also in others they were arrow-like and sculptural.

Hinterland, the second work, choreographed by Richard Cilli, was perhaps somewhat messy, drawn out and untidy; it was in need of a little editing. Hinterland claims to “explore the tension between outward appearance and the inner landscape. Are we all fundamentally unique, or are we unified by a collective nature?”

The soundscape included lots of vocalisation, odd noises (such as blowing on the elbow) and passionate Romantic piano (by composer Franz Lizst). The cast were in grey casual, military uniform-style outfits. Cilli’s choreography was very tight and precise. Group noises controlled an individual’s movement. There were some fascinating short solos — robotic movements were contrasted with slow-motion, runs and explosive leaps. In some ways, Cilli’s choreography perhaps had allusions to the recent performances of Gabrielle Nankivell’s Wildebeest. The ensemble — energetically united — pushed, tumbled and writhed in a panting, pulsating heap.

It appeared the work had finished…but wait, there’s more. Another whole segment followed with a discussion about the film of the Titanic, with the dancers echoing and mirroring the emotions of the people discussing it.

Tense, dark and dramatic, Of Dust by Rachel Arianne Ogle (from Perth) was next with its throbbing, pulsating electronic score by Ned Beckley. Strobe lighting was included, and Benjamin Cisterne’s designs made for an eclipse-like effect.

Ogle’s choreography was extremely demanding and included some dangerous, almost circus-like acrobatic lifts, throws and catches. Long, stretched arms and/or rippling, sinuous port de bras were required at various points, as were robotic-like arm movements. Slips, slides, runs, falls and drags were seamlessly, breathlessly performed. The cast were full of sizzling, sometimes hidden, energy throughout the whole work. The piece opened in a dark circle of light, with the cast in a pulsating circle, as if the dancers were pushing and pulling a galaxy in precarious balance. Charmene Yap had an eye-catching, slinky solo. Mostly, the cast performed as an ensemble unit, but there were frenetic individual solos interconnected in space. Toward the end, it was as if they were winding up the universe. The finale, in rather ominous silence, showed that the cast were threatened by something  – but what?

Unfortunately, I was quite disappointed in Shian Law’s (from Melbourne) Epic Theatre, which actually began mid-interval with two of the cast mock-wrestling in the foyer. Law is interested in blurring the lines between audience and performer, and as we entered after interval, the audience, separated into halves, was blocked from taking seats by a line of people standing with linked arms. Non-dancers were included in this work, and there was a great range of body shapes and sizes. Eventually, we were able to resume our seats. At times, the cast were like shop mannequins in posed tableaux; at others, they perhaps resembled Antony Gormley sculptures. Cisterne’s hazy lighting was quite delicate at times, and at other points stark and almost blinding. The cast argued, they reclined gracefully and posed. There was an extensive use of walking for the non-dancers, while the cast from SDC threw themselves into Law’s challenging choreography. But there was no emotional involvement or apparent meaning. The techno club music performed live by Marco Cher-Gibard throbbed, pulsed and hummed uncomfortably. Perhaps it was just me, as the younger audience seemed to greatly enjoy it.