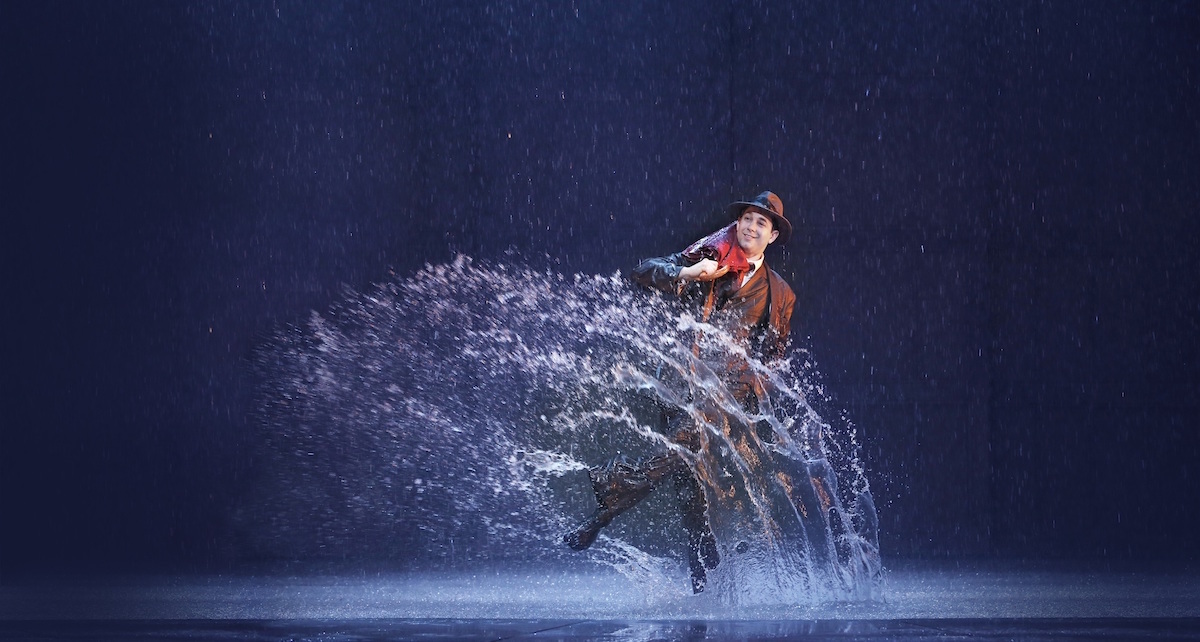 One of old Hollywood’s finest and much-loved screen musicals, Singin’ in the Rain, opened to thunderous applause at Sydney’s Lyric Theatre. Superbly adapted for the stage, Singin’ in the Rain is captivating, joyous, romantic and fun, making it hard not to fall in love with this musical.

Set in the 1920s, this lighthearted comedy shows the funnier side of the problems faced by a movie studio when the industry transitions from silent era to talkies. When only beauty and mime were needed in movies, the lead actor and actress are now required to speak lines. This would be okay, unless you had a screeching voice and could not hold a tune like their lead actress. With not long to go until the launch of the film Duelling Cavalier, a chorus girl was secretly recruited to dub the voice of the leading actress, and she also happened to have caught the eye of the lead actor. The plot continues with romance, scheming and revelations that make for a highly entertaining show.

The headliner for the production, Adam Garcia, is unfortunately out of the show with an injured calf muscle, but you needn’t be concerned. Taking to the stage in the lead role of Don Lockwood is Grant Almirall. Almirall is no stranger to this role, recently completing the international tour of Singin’ in The Rain. He is very much a leading actor who is versatile with strong dancing ability and a fantastic voice. Stepping into the shoes of original motion picture star, Gene Kelly, Almirall did a fantastic job bringing the charm and grace of this character to life.

The cast of ‘Singin’ in the Rain’. Photo by Jeff Busby.

Erika Heynatz is simply terrific as Lina Lamont, the leading actress whose voice doesn’t quite match her beauty. She brings the right mix of naivety and comedy, which had the audience in laughter. Gretel Scarlett excels as Kathy Selden, the chorus girl who catches the eye of Don Lockwood and who dubs the voice of Lina Lamont. Scarlett is a true triple threat, beautifully singing “Would You”, “You Are My Lucky Star” and dancing her way through one of the most fun numbers in the show “Good Mornin’”. Jack Chambers has one of the most physically demanding roles as Cosmo Brown. His slapstick comedic skills were put to the test in the infamous “Make ‘Em Laugh” song, and in “Fit as a Fiddle”, which he performs with Almirall. Chambers delivers this role with agility and energetic ease.

The set design was simplistic, with the same backdrop throughout the show, props simply changing and the storyline moving at a swift pace. One thing I did miss was the featured couch in the movie version of  “Good Mornin’”, which was substituted for a park bench. The orchestra perched above the stage were exceptional and reminiscent of the old Hollywood brass orchestras. The highlight of the night, however, was the downpour of rain occurring on stage for the title number, “Singin’ in The Rain”. Almirall sang, tap danced and splashed his way around the stage, leaving the front few rows ducking for cover. A fun, playful and visual delight, Andrew Wright’s choreography payed homage to Gene Kelly’s timeless original choreography in the movie. This song was reprised at the end of the show with the ensemble cast. They were having such a good time on the stage in the rain, I wanted to grab an umbrella and join in! With such a talented and seasoned ensemble, combined with Director Jonathan Church’s superb direction, this show could rival any West End Production.

Tickets are on sale now for a strictly limited season in Sydney. For more details, visit www.singin.com.au.

Photo (top): Adam Garcia in ‘Singin’ in the Rain’. Photo by Jeff Busby.