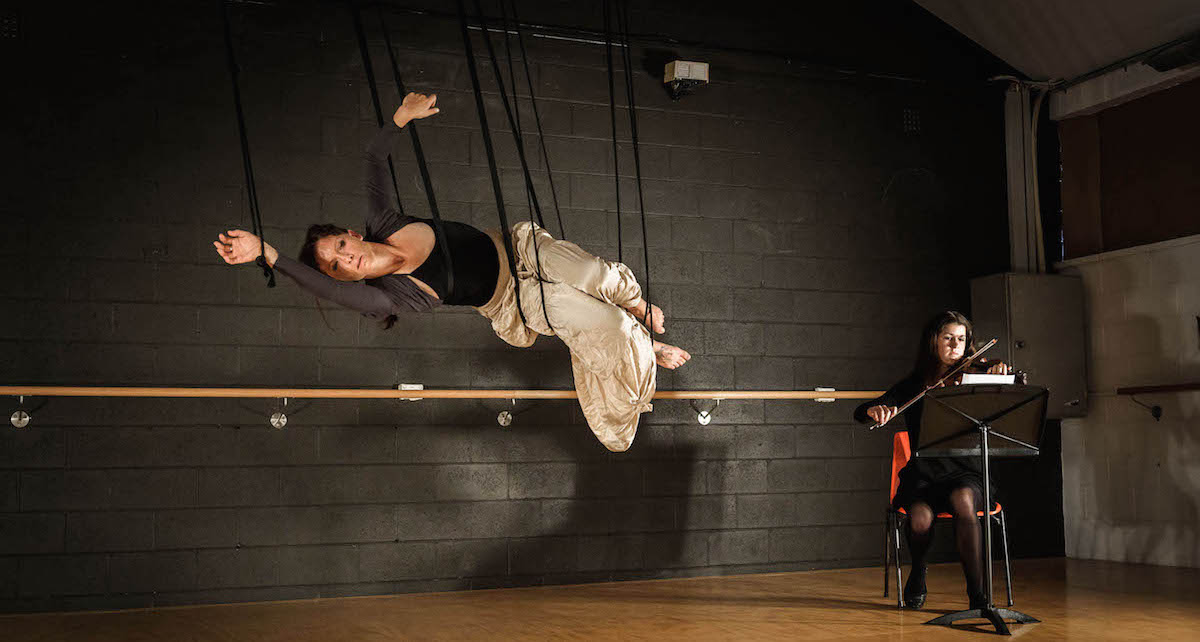 As dance lovers, we’d all like there to be more audiences for dance. But unlike those of us who are familiar with dance and theatres, there are a lot of Australians who are intimidated by traditional dance settings, like the proscenium arch theatre. People who are unfamiliar with dance and its environs may feel unwelcome or intimidated coming into such spaces. So why don’t dancers take their performances into non-traditional spaces? One of the challenges is the size of the performance space. Dancers like to move and take up space, so it can be a little tricky to fit a performance into non-theatrical spaces.

Enter Dances for a Small Stage, an initiative that made its debut in Adelaide during the Adelaide Fringe Festival this year. The project was put together by choreographer Rachel Kennedy and Lisa Lonero, who were inspired by Julie-anne Saroyan, a friend of Kennedy’s who had started something like it in Vancouver, Canada, about 15 years ago.

Speaking with Dance Informa, Kennedy and Lonero explained that Saroyan had developed various versions and varieties for Dances for a Small Stage, but the version they used is called Point 5, where they commissioned five choreographers and paired them up with five musicians to each create dance for a small space.

“I was chatting with Lisa about it about a year-and-a-half ago, about how it would be a great idea for Adelaide,” Kennedy says. “Lisa was keen, so we decided to do it. We got Julie-anne’s permission and had lots of meetings with her to understand the setup and how to go about making it happen.”

Kennedy and Lonero explain that Julie-ann had started with mainly contemporary dance, but over time she’s included classical Indian dance, burlesque, hip hop and more. They love that idea as well, and their first show in the Fringe included contemporary, neo classical, flamenco, hip hop and Latin.

In the debut Dances for Small Stage in Adelaide, Kennedy collaborated with musician Rebecca Gayther-Moore, and Lonero partnered with musician Frank Giles. The other three choreographer/musician pairs included Madeline Edwards and Jakub Jankowski, Emily Mayes and Caspar Hawksley, and Carlie Angel and Bea Hanna. Lonero’s work had three dancers, Kennedy’s had two, and the rest were all solo dancers.

Kennedy and Lonero found they really enjoyed watching the choreographers and musicians work together.

“We found that the relationship between the choreographer and musician became really interesting to watch on stage,” Kennedy explains. “Most of them didn’t know each other, because we’d paired them together. So they had to figure out how to work with each other and then find some kind of special relationship. You could see it build over the course of the performances. That was something that I don’t think a lot of dancers get to do.”

The season also had good reviews and won the award for Best Dance at the Adelaide Fringe.

“Considering it was our first show, it went really well,” Lonero reveals. “We had six performances. Two were completely sold out, jam-packed, and people were sitting on the floor. We had 60 seats to book online and ended up packing in about 75 or 80 people. It was as Fringey as you can get it. We did our own lighting and relied heavily on our volunteers, parents and husbands coming out to help. It was a real community affair.”

Lonero stresses the importance of having a venue sponsor for the project. “Something that was really relevant to why we started this in the first place was because of Rachel owning the studio here,” she says. “She was prepared to sponsor the studio space for rehearsals and for the actual show. We went a bit overboard for the first run. We’ll have to monitor this next time around. I don’t think we would have been able to do this if we didn’t have Rachel.”

When asked if they’d do it all again, both Kennedy and Lonero were adamant that, yes, they would, and are hoping to do it annually at this point. They hope to take it out of the studio setting, into the city and into a bar.

Their main objective is to “get some new stuff happening”, they explain.

“We hope that from this small starting point, we can help choreographers and musicians get something onstage, and then they’ll get funding or develop it into something bigger and take it onto a bigger stage eventually,” Lonero shares.

“The main idea of the format is that it is always new work, so it is supposed to generate new ideas, create new collaborations, and keep it fresh,” says Kennedy. “Then if the artists go on to do something else, then that’s great. For example, Caspar and Emily did a Flamenco piece, and now he is doing it as part of his year 12 exams and has been invited to Emily’s Flamenco school to play for them.”

She continues, “Carly Angel is now going to use Beatrice in her project, which has been funded. I don’t know if the whole thing has been funded, but she did get some funding. We provided her with an opportunity to develop her work with sound with a live musician. So now she not only has a live musician for the next work, but she has professional photos, footage, and a musician with a sound score specific to her work.”

When asked what is so great about this format, Lonero and Kennedy say, “because it works.”

“It demystifies dance, and the intimate setting means the barrier between the performers and audience is reduced,” Lonero adds. “The audience get to really see what is going on and understanding it. Having dance and music together means that if people don’t like or understand dance, they can enjoy the musicians instead.”

An initiative like Dances for a Small Stage is particularly important in the Adelaide dance community at the moment.

As Kennedy notes, “The reason we started doing this was because we realised how little work there is for independent dancers and how little opportunity there is to get your work up and running, particularly following the recent defunding of Ausdance SA and, along with it, the loss of their Choreolab program, which gave emerging choreographers a chance to develop and present new work.”

Kennedy and Lonero have applied to Arts SA for funding to the support the project. They received positive feedback but were told they needed to prove themselves first.

“So we’ve done that now, and hopefully we’ll go back and see how we go,” Kennedy says. “I think one thing that has come to our attention is the need for leadership in the dance community to provide performance opportunities for artists at whatever stage they are at. For our show, it could just be an idea they’ve come up with, it could be something they’ve been doing for a while and need to develop it a bit further to get professional photos and footage to use as support material in funding applications.”

As Kennedy notes, they are living the philosophy of entrepreneur Seth Godin, “You don’t have to wait to be picked, you can pick yourself.”