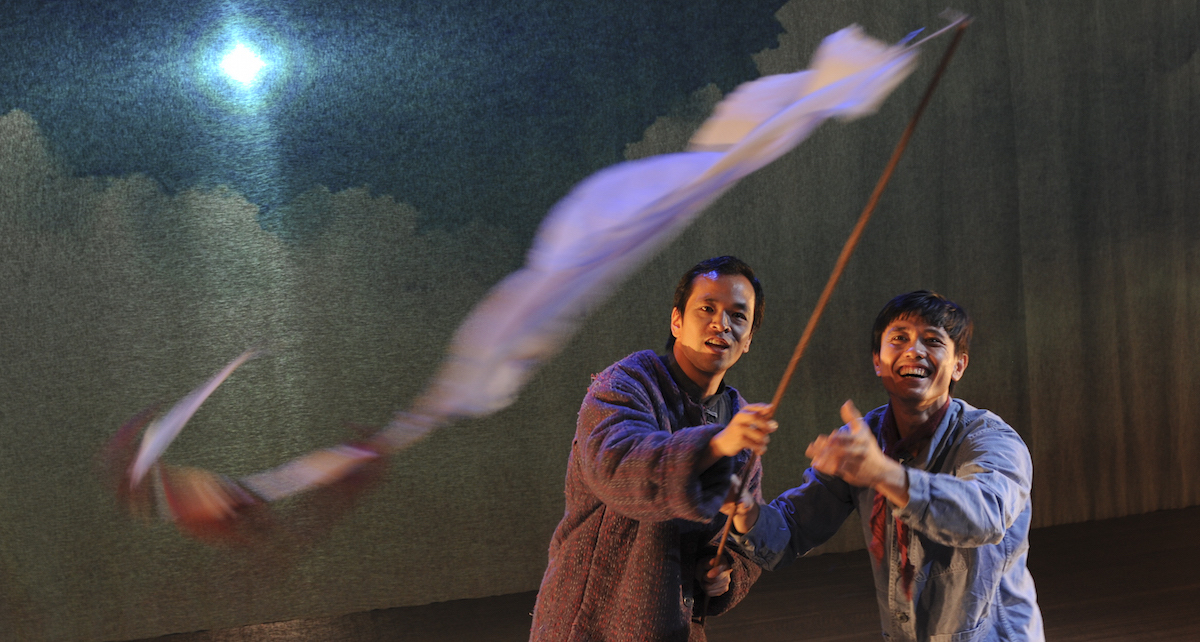 “You have your secret dreams. Follow them. Make them come true.”

Based on the exquisitely illustrated children’s version of Li Cunxin’s iconic autobiography (illustrated by Anne Spudvilas), the world premiere of Monkey Baa Theatre Company’s The Peasant Prince is terrific and inspiring.

Cunxin is now artistic director of the Queensland Ballet, and this tells the story of how he, a 10-year-old peasant boy, was plucked from his village in rural China and sent to an elite ballet academy in Beijing. He must leave everything, particularly his family. We see how over the years of gruelling training, Cunxin transforms from an impoverished peasant to an international dance star. When Ben Stevenson, director from a top American ballet company, visits the academy, his life is yet again irrevocably altered. Cunxin’s courage, resilience and unwavering hope for a better life enable him to transform into the best person he can possibly be.

Directed by Tim McGarry, The Peasant Prince is told in flashback, opening and closing with Cunxin’s appearance as the Nutcracker Prince in the iconic Christmas ballet with the Houston Ballet and his parents arriving to see him perform. The script is rather fluid and simple but just right for the market it seeks to reach.

The set is a framed photo of a woodblock print of Mao done in Chinese socialist-realist style in red, black and white. In this rather minimalist staging, there is a curtain that acts as a moveable projection screen and also various assorted hand props, including a bike. Much effective use is made of projections — designed by Michael Hankin — most of which are fabulous delicate landscapes of clouds or bamboo but also include silhouettes and shadows (the huge crowds in Beijing and at airports, for example), Chinese Maoist propaganda paintings and the “walls” of newspapers.

The massive anti-Western propaganda of the period is stressed, and it is hard to imagine the gaint culture shock not just with the move to Beijing but also later to America.

Choreographically, all is performed barefoot. There are basic ballet moves (plié, grand battement, bourrée, for instance) and preparation for pirouette. Martial arts movements and everyday movements are included. Toward the end, contemporary dance and floorwork is also executed.

The Peasant Prince stars John Gomez Goodway (Oneness: Voice Without Form, His Mother’s Voice), Jenevieve Chang (Club Shanghai, Stories Then and Now), Jonathan Chan (The Secret Island, Turnadot Reimagined) and Edric Hong (Winter Retreat, A Play Like This). The four performers combine to effortlessly make a wonderful ensemble with great teamwork and thrilling individual performances. Apart from Goodway as Cunxin, the other performers play multiple roles. As Cunxin, Goodway is terrific, with a dazzling smile and huge expressive eyes. He is lithe and agile with impressive charisma. We follow Cunxin’s training and life at school and sometimes his bad treatment and fellow students. We see how he struggles with homesickness and tries to meet his teachers and family’s expectations.

The early kite-flying scene is poignant, and we do get a sense of the amazing journey that Cunxin undertakes. Two fables are interwoven in his story – one of the frog in the well, the other of the guard and the bow. Both emphasise striving for your dreams, being determined and remaining persistent. The whole production really is about following your dreams.

Much is made of Cunxin’s loving family relationships with his brother and his overworked, worn out, and strict but loving parents. Family honour and truth are also stressed. While The Peasant Prince is mostly kept light and inspiring, there are some quiet, dark episodes (the dramatic consulate scene toward the end, for example).

Chang is delightful as Cunxin’s loving, caring mother who supports his dreams and acts as his lodestar and moral mentor. Brightly smiling, she is also engagingly charming as his village school teacher and then stern and unsparing as his quite cold dance instructor, and also wittily prolix, flashy and fascinating as a wealthy Texan arts patron, before finally morphing to become a top dance partner for Cunxin. Chan was splendid as Cunxin’s overworked, strict yet compassionate father and the rather sinister Party bureaucrat, among the other roles he portrays. Hong had the children in the audience laughing as a brother with fart antics and stinky feet, and was also impressive as a rather severe national talent scout and a gaudy American choreographer.

Overall, The Peasant Prince provides wonderfully inspirational school holiday fare for everyone ages six and up.