Dance Informa had the opportunity and pleasure to interview dancer and choreographer Kyle Page. Formerly a Dancenorth and Australian Dance Theatre dancer, Page, along with associate Amber Haines, has moved to far north Queensland to take the reins as new artistic director of Dancenorth in Townsville.

We caught up with Page during his recent stay in Sydney, where he was performing at Carriageworks as part of the Sydney Festival lineup in Stephanie Lake’s Double Blind. Page was still buzzing with excitement after just having been part of the lineup at Mofo – the Museum of Old and New Art’s annual festival of music and art in Hobart, Tasmania. “This year has certainly started with a bang!” he exclaims. 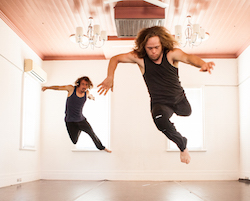 “It was an amazing experience to be part of the Mofo festival,” he adds. “The Salamanca precinct in Hobart is such a hub for artists, so much creative energy, creative people. The vibe there was just amazing. We felt so proud to have been invited to participate during our first year at Dancenorth.”

Page is full of enthusiasm and energy, bubbling with ideas and projects for the regional contemporary dance company.

“Amber and I are super excited to have the opportunity to work in this gorgeous part of the world, pumping out new works in 2016, incorporating a number of amazing choreographers,” he shares. “Being regionally-based is so different; there is such a feeling of community engagement. People know what’s going on, and the arts in general have strong local support.”

Kicking off in late February 2016 and continuing through March, Page and Haines will be working on a children’s program with the unforgettable name of Rainbow Vomit – did you say “Rainbow Bonnet”? “No, no… Rainbow Vomit,” Page assures. “It’s a children’s show, and they love stuff like that. We want to create a space for children, working around the idea of encouraging creativity.”

Rainbow Vomit is designed to target young audience members between the ages of seven and 11 but will appeal to all ages, Page explains. Viewers will wear their own “firework glasses”, which refract light and generate countless rainbows.

“This work came about because of the age in which we live,” Page says. “Children are exposed to so much technology and sensorial stimulation. I’m interested in the research around attention span and the reaction of children to movies and games where their cortisol levels — that flight or fight mechanism — is constantly switched on. Is this dulling children’s creativity, limiting their capacity to utilise the modalities of the brain? We’re looking to investigate this within live performance. We also feel this children-focussed work will have an extensive touring capacity, so we’re keen to get it out into regional areas as well.” 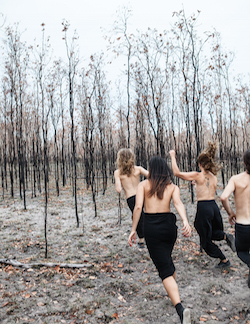 April and May 2016 will see the much anticipated double bill, If _______ was _______. Two choreographers, Stephanie Lake and Ross McCormack, will be provided with the same canvas, the same brushes metaphorically speaking, to create their own two individual works, “to fill in the blanks”. This program will tour regional Queensland before heading to Brisbane and then onto Melbourne in June. They’ll both be working with composer Robin Fox, who recently also composed the soundtrack for Lake’s Double Blind.

Come July 2016, and the momentum continues. “We’re very excited to have choreographer Lee Serle returning from New York to produce a 30-minute work for us called 3 dancers, which will be performed at the Australian Festival of Chamber Music, which is held annually in Townsville,” Page says.

Dancenorth is a co-commissioner of this new work, along with UK-based Rambert Dance Company. A new score has been commissioned by Russian-born Australian composer Elena Kats-Chernin.

With plenty of energy and ideas to explore, Page and Haines then plan to take some time off to spend a few weeks developing new works for the company’s 2017 program.

But then October 2016 sees the company literally take flight, as they head to Japan and New York to present Spectra. Originally an OzAsia Festival/Dancenorth co-production choreographed by Page and Haines in 2015, Spectra became a collaboration of arts from Australia and Japan, blending contemporary dance, butoh, live music and visual art.

Page also has the spine-tingling dream (and the requisite drive) to perform Spectra live in Sydney’s Museum of Contemporary Art, sharing the same space as the exhibition of Tatsuo Miyajima from Tokyo. Page met this internationally renowned visual designer two years ago and convinced him to partner with himself and Haines in the original production of Spectra.

“We’re also very excited to have Gideon Obarzanek and Lucy Guerin collaborating on a work for Dancenorth in 2017 – Strange Attractor, which will be performed with live Indonesian music,” Page explains. “This will be a gutteral exploration of sound smashed with movement. It’s going to be a big year for the dancers!” 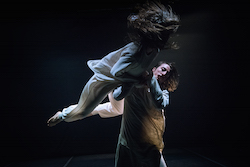 But wait, there’s more. Longterm, Page is putting into place a 10-year plan of engagement with the Urab dancers and community on one of the Torres Strait Islands that is known as “Poruma” or “Coconut” Island.

“I’ll be the facilitator, not the director,” he explains. “The idea is to share stories, share movements, to have a true exchange.” For a minimum of two to three weeks each year, the entire Dancenorth company will relocate to Urab Island, followed by the reciprocal exchange of Urab dancers coming to Townsville.

“We will align the project with regional festivals so that we have performance outcomes and opportunities,” says Page, “where both parties parties are engaged and excited, where there is forstering and care.”

True to Dancenorth’s mission to be a “major champion of the arts in regional North Queensland, balancing a dynamic regional presence with a commitment to creating compelling contemporary dance that tours the globe”, the company would appear to be in very capable, motivated and dynamic hands with Page at the helm.

For everything Dancenorth visit www.dancenorth.com.au.