Australian iconic production Priscilla Queen of the Desert, complete with a fabulous full-sized bus on stage, is currently sailing across the Mediterranean onboard the Norwegian Epic. With a cast of many Aussies, this spectacle has just had its debut upon the seas. 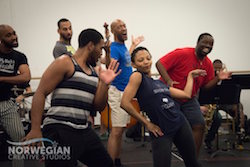 Norwegian Cruise Line is known for employing Australian dancers, singers and actors for its Broadway and house productions, and the casting directors will once again be hitting our shores this month in search of Aussie talent for Priscilla, as well as shows like Legally Blonde, Million Dollar Quartet and After Midnight.

When watching the rehearsals and walking the halls of Norwegian Creative Studios, one can hear the Aussie accent everywhere. It’s almost a home away from home for our talented musical theatre artists.

Erin Bruce of Sydney, on her third contract with Norwegian, tells us, “I just love working with the company. They’re great! As soon as I found out they were doing Priscilla, I was at the auditions in a heartbeat. The creatives that we’ve worked with are incredible.”

Tom Sharah, also from Sydney, was obviously excited to be cast by Norwegian. “I get to sail around the Mediterranean for five months doing Priscilla Queen of the Desert!” he says. “I’m getting paid for it, it’s free travel, I’m seeing the world, meeting new people, and working on a huge multi-million dollar musical! And it’s an Australian musical, too, so it sort of brings something authentically Australian to a completely new, international audience.” 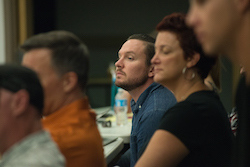 Kai Carrier watching rehearsals for ‘Priscilla Queen of the Desert’.

Erinco Mammarella, of Melbourne, shares Sharah’s sentiments. “It’s amazing to work with people of this talent,” she explains. “As an Australian performer, if you’re going to work on any shows, Priscilla is about as iconic as you could possibly get, and it’s a great opportunity to strut your stuff in something that is totally made for Australia.”

When asked why Norwegian makes its yearly trek all the way Down Under in seek of talent, Casting Specialist Kai Carrier explains, “When I was dancing, here in America, we had to learn all traits of dance – jazz, ballet, tap, everything. But now in America, everything is so commercial, and they just want to do one or the other. They just want to do hip hop, or they just want to do contemporary and make shapes with flexed feet. Australia is the only place we go to now where I know they’re going to be trained in everything, have style, be able to do hip hop, have the ballet training, and be able to tap!”

Versatility is key in the cruise line world, as dancers can be asked to perform many styles of dance within the one show, or in multiple varied shows, as well as act and sing.

But Carrier stresses that it doesn’t matter if you’re not a vocal diva. Don’t let that deter you from auditioning if you’re a strong dancer.

“We have some shows where dancers don’t need to sing at all,” he adds. “And if we just need an ensemble singer, all I need to know is that he/she can carry pitch. So sometimes a simple song like ‘Happy Birthday’ is enough for me to determine that.” 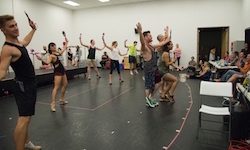 Rehearsals for ‘Priscilla, Queen of the Desert’ at Nowegain Creative Studios.

Although, he does stress the importance of vocal training and practise if you’re wanting to make it in the musical theatre world.

“Technique and performance quality are both important,” he shares. “I think the base of the training should be there, but you should be a great performer. You should hit things hard and make me want to watch you. Placed, strong and clean is really important to me. Confidence is everything in an audition.”

And don’t just show off your tricks. The Norwegian team wants to see you dance. 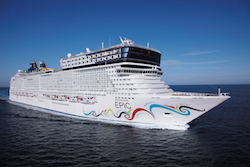 “Tricks are cool and all, but I want to know that I’m going to want to watch you even if you’re just walking across the stage,” Carrier explains. “The tricks are exciting, but they do not make a dancer.”

So what can you do to stand out at the auditions coming up in Brisbane, Sydney and Melbourne?

“For me, showing that you’ve made an effort is important,” says Carrier. “I don’t need you in show face, but you should look good. I’m really surprised at how many people come in to auditions with zero makeup, and in sloppy, baggy clothes. It’s the first time I’m seeing you! It’s your first impression, and you should walk into the room looking show-ready.”

And the entire package is important. “Your body is your business card,” he stresses. “It’s the first thing I see before I see you dance –it’s the first thing I’m taking in. Of course your talent is number one; however, your entire package is important. So when you walk into the room, and you look stellar, that’s a very big step toward success. We want to package a fantasy for our guests. They want to see beautiful people on stage.” 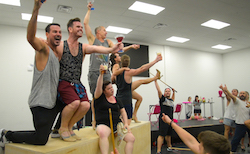 Rehearsals for ‘Priscilla, Queen of the Desert’ at Norwegian Creative Studios.

Norwegian Cruise Line’s casting team will be in Australia from November 12, so make sure to attend an audition. Audition details are below, and more information can be found at www.norwegiancreativestudios.com/auditions.html.

Norwegian Cruise Line is known throughout the cruise line industry for producing the highest quality entertainment with talented cast members from around the world. They are currently running the Broadway shows Priscilla Queen Of The Desert, After Midnight with Broadway’s Brenda Braxton, Million Dollar Quartet, Swing, Legally Blonde, For The Record and Vegas The Show.

In addition to its Broadway Lineup, Norwegian Cruise Line’s original productions, which are amongst the most spectacular at sea, include Paradis, Elements, Lights, Camera, Music, and Soul Rockin’ Nights.

Please bring picture/resume, stapled together, and come ready to dance (men must bring their own heels, as well as sneakers). Wear form-fitting clothing. Day will start with “male” dance in sneakers, and then we will move to drag/heels later in the day.

Photo (top): Dance Informa’s Editor Deborah Searle with some of the cast of ‘Priscilla Queen of the Desert’ in rehearsals.