If you’ve considered backpacking the globe when you finish high school or uni, or spending all your spare time in the sun and surf, then a cruise ship gig could be your perfect job. You don’t have to join the armed forces to see the world, you can dance your way around the globe, all while sailing on a luxurious cruise liner!

Dance Informa recently visited Norwegian Creative Studios in Tampa, Florida to watch the performers in rehearsal for Broadway shows After Midnight and Priscilla, Queen of the Desert. The energy, excitement and sheer talent in the rehearsal rooms was explosive. It quickly became obvious why dancing for a cruise line is a priceless opportunity.

So why should you audition for a cruise ship gig? 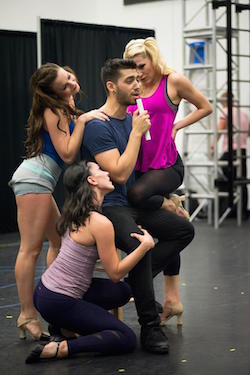 The demanding rehearsals and daily performance schedule on board can help you become a seasoned performer very quickly.

While speaking to the Aussie cast members in rehearsal, Tom Sharah of Sydney, currently performing on the Norwegian Epic in the cast of Priscilla, said, “This is like baptism by fire! You’re thrown in the deep and you’re flown to the other side of the world, where we rehearse for six days a week, up to eight hours a day. It’s incredible training. You’re doing a full-blown show and you only get better with practice.”

If you have the passion, technique and look, cruise lines can mould you into the performer they need, as long as you’re willing to learn. Norwegian Cruise Line has huge state-of-the-art studios specially designed with high ceilings and rigging for aerial work. Many dancers come to the studios without aerial experience, but under the tuition of some of the world’s leading aerial artists they leave Norwegian with a new, and stunning, skill under their belt that can only make them more employable.

Seasoned Norwegian Cruise Line performer Erin Bruce from Sydney says that perceptions are changing because cruise lines like Norwegian are now presenting Tony Award-winning productions on board that are akin to the quality of work you’d expect to see on Broadway.

“A couple of years back, cruise work wasn’t really looked highly upon, especially in Australia. Having gone back with cruises on my CV, they’d be like, ‘Oh, yeah, it’s nothing.’ But now with all of these massive musicals coming on board, there’s so much more work, and so much more talent is actually going after these cruise ships.”

Competition for places is becoming more fierce as performers can star in hit musicals like Legally Blonde, Rock of Ages, After Midnight, Swing!, and Priscilla. The quality has improved so much that performers from these cruise productions are now getting hired on Broadway due to the experience gained working with Norwegian.

#4. Work under the industry’s best.

Norwegian is known for bringing choreographers, directors and performers straight from Broadway, television, Cirque du Soleil and national tours to set hit musicals, as well as stellar house productions. One can only grow as a performer by working under such industry talent.

For Priscilla Queen of the Desert, Norwegian brought in Dean Bryant and Andrew Hallsworth to stage the show, and original costume designer of the film and Broadway production, Tim Chappel, to create the flamboyant and fabulous costumes.

“The creatives that we’ve worked with are incredible!” says Bruce about Priscilla. “The opportunity to work with them is one of the main reasons that I auditioned in the first place.”

Who doesn’t want to get paid to travel? And this isn’t just airport after airport, this is travel on an extravagant cruise ship with all-you-can-eat meals, stunning sights, islands, beaches, fun, sun, more fun and more sun. Have you ever been on a cruise? Did you have an amazing time being in a new, gorgeous location to explore every day? This could be your life for several months.

Although you generally have more responsibilities on the ship than just performing each night, and you do need to leave time for taking class, working out and rehearsals, there is a lot of free time during which you can enjoy the cruise life – and be paid to do it! People are paying thousands of dollars to be on your ship, but you are being paid to join in the party! 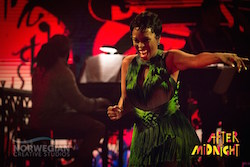 Brenda Braxton in ‘After Midnight’ for Norwegian Cruise Line.

While cruising, your accommodation and meals are all covered, so many performers find that they can save a good portion of their paychecks and use the experience as a time to get more financially set up. Unlike performing on Broadway in New York, where most of your paycheck goes toward the high cost of living in one of the world’s most expensive cities, performing at sea can allow you to perform Broadway-quality work without the living costs.

If you don’t go crazy with shopping, or by using the expensive internet access excessively, you should be able to save a lot of your money and finish your contract not only enriched as a performer, but also enriched in your wallet.

“What happens onboard, stays onboard!” Working in such close quarters with other like-minded, talented performers means you will have a lot of fun making friends for life. You may also drive each other mad at times, but you will definitely become a stronger performer by association. Talent rubs off. Use it as an experience to make valuable contacts and friends in the industry. You never know what work this could lead to in the future.

So now’s your chance to audition for cruise ship work. Norwegian Cruise Line will be holding auditions in Australia this month! Details below:

Please bring picture/resume, stapled together, and come ready to dance (men must bring their own heels, as well as sneakers). Wear form-fitting clothing. Day will start with “male” dance in sneakers, and then we will move to drag/heels later in the day.