Few Australians who are interested in the arts are unaware of the recent bombshell arising from the federal budget, in which $104.8 million has been shifted from the Australia Council for the Arts to the Minister Brandis’ Arts Ministry, accompanied by an efficiency savings requirement of $7.3M for the Council over four years. This follows a cut of $87.1 million to the arts budget over four years in the 2014 budget.

Along with these funding changes was the announcement that the major performing arts companies would be protected from cuts, while programs such as Art Start, the Artist in Residence program, and Creative Communities Partnership are being cut. Sadly, this state of affairs leaves the burden of any loss of arts funding squarely on the shoulders of the independents and small to medium arts companies.

Yes, it is disappointing that there isn’t more federal, or state, public money being invested into dancers and choreographers who are at the early part of their career, or who wish to tread an independent path. But these times they are a’changin’. With this in mind, I recently spoke to a young South Australian choreographer who is forging his own path, showing determination and cultural leadership at a grass roots level so that he can create the dance works he wants, without being reliant on funding.

Tobiah Booth-Remmers began creating a name for himself when he was just a student at AC Arts, and his name has been popping up more and more recently since he established a collective of dancers in The Human Arts Collective (THAM), who train together three mornings an week, and recently staged their first work, Wonderland.

Remmers has a big dream, and he’s smart enough to know that you don’t get anywhere without having that big dream in mind. When I asked him what his aspirations were, he unabashedly admitted to the desire to create an internationally and nationally recognised company making contemporary performance work.

“It’s kind of like setting the most ambitious goal I can think of I guess, in the hope that people can feel like it’s building towards that. I don’t want it to be one of those things that pops up, we have a go, it loses momentum, and then dies off.”

While he has high aspirations, Remmers knows that to make change, you need to gather people around you, and inspire them.

“In the short term, I’d like it to become an example of how a group of artists can work together outside of financial support and in the current environment – supporting each other, keeping up the training, having performance opportunities, activating the arts landscape in SA.”

Of course, one of the biggest challenges in being an independent artist, and in being the person who is holding it all together for a collective is managing the logistics as well as having the time and headspace to create. But Remmers knows that there needs to be someone to drive it, and he plans to keep doing this as long as he has the energy to do so. 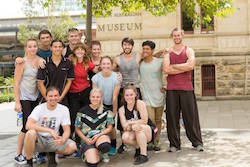 A THAM performance with parkour artists from Point A, with the support of Splash Adelaide. Photo courtesy of Tobiah Booth Remmers.

To make things work, the group pool their resources, each making a financial contribution to the group to cover costs, and taking on some of the logistics. The existing THAM members hope to involve more people in the collective to alleviate some of the pressure.

I asked Remmers if he had any tips for other choreographers who want to make things happen in the same way he has. After laughing and admitting that it’s still early days, he stressed that it has to come from a personal place to start with, and it has to be something that really interests you because no matter what, it will inevitably be a huge amount of work.

He also noted the importance of getting other people engaged by getting them involved in the process or organisation so they take some ownership of it, which increases their loyalty. Flexibility is key, but you also need to know where the line is when it comes to scheduling.

“Because you are not paying people you can only make demands up to a certain point, so you have to understand people’s schedules, but you also need to be able to say that we are putting on a work and that may get us further financial support or funding. It’s a balance between appreciating the members for putting in time and paying a fee, but also saying as a group we have this opportunity so we need to turn up to rehearsals for the next four weeks so we can pull it off and increase the reputation of the collective.”

Remmers admits that he isn’t quite sure yet how he will sustain the collective in the longer term, and they are still figuring out how to find the best system. But they are experimenting, and trying out ideas. He says the fee payment idea works to get it off the ground, but it’s not sustainable.

While it is tough to have an uncertain future and no steady source of money, Remmers notes that the independent path has its benefits.

“You are not tied to funding, so you can experiment. I’m interested in testing an idea and just giving it a go. With Wonderland we occupied a warehouse that was probably not OH&S approved, and there were people walking through there in semi darkness. I don’t think ADT could do that because of funding restrictions. The flexibility of the organisation does allow us to take these kinds of risks and test the things that might work. It’s vitally important, especially with the way the environment is going in terms of financing, that you can be flexible and be able to find and work within it, which takes courage.”

Remmers stresses that the current funding context means artists need to open up a bit and let go of the assumptions of a previous financial era.

“As artists we have to be more flexible. We have to let go of the idea that we are going to get into a company and have a sprung floor and all these things. It’s very much about the individual taking responsibility. And then asking yourself how you can get your work out there and make it accessible and interesting.”

“Especially for people our age group – pop up bar, Fringe time, warehouse, music gigs, it’s like, well, we can do that – hire a warehouse, put in a bar, have some music, but why can’t we put in performance? The audience go there knowing that it is a holistic thing where there is a bar and they can sit down and hang out, and they know some kind of performance will happen. They may not know what that is, but the environment is familiar, so why not put our performances in that environment?

Remmers doesn’t waste time on complaining. As he says “It’s understanding, admitting the situation we are in. We can complain as much as we like, but it doesn’t change it. I am in that situation, so how do I work within it?”

It’s an extraordinary attitude. So many people complain about change, but in the end, those who survive and flourish are those that accept change and work with it. I asked Remmers what it was in his background that made him this way.

He said a lot of it came from his upbringing, with parents who always encouraged him to do whatever he wanted, including going to ballet from the age of 4, even though he was a boy, just because he liked it.

His parents’ attitude was “If you want to do that thing, go in and do it and do it properly. So that has always been a mentality. I do jump between ideas a lot, but when I get caught on something and it is something I’m interested in, I put everything in until I feel like I have hit the end.”

“That sets up the idea that you do things yourself, and you work for yourself. And that has allowed me to survive since graduation. Even as I graduated I thought I’d get into a company, but quickly figured out that wasn’t a reality. Rather than letting it go, I thought how do I make it work for myself and keep pushing on with it?”

Who knows what the future will hold, and whether THAM and Remmers will still be around in another ten years or so. And the idea of a collective is by no means new. But I think that given Remmers’ attitude that you accept the circumstances, and work as hard as you can with what you’ve got, is a good one. It’s about putting your energy into the things you can change, rather than the things you cannot. I am not suggesting that as a sector, the arts community doesn’t keep pushing, as it has with the #freethearts campaign, to increase the amount of funding for the arts, especially for the independent and small to medium sector. But as individual artists, it’s about tenacity, it’s about thinking outside the box, connecting with others, and taking stepping up as cultural leaders, at least in the landscape that surrounds you.

As Remmers’ put it “I think it is important to have that courage to keep going out, to keep trying things and pushing and don’t wait for someone to tell you what to do and what to do next.”