Patrick Studios Australia has come a long way since its inception in 2005. After a successful career performing in Europe, PSA Director Todd Patrick started teaching dance in a little primary school hall in St Kilda. At that time, he had only a handful of jazz and hip hop classes two nights a week, but on Saturdays he held open classes which became increasingly popular. Based on the success of his open classes, Patrick made the decision to open a full time performing arts course while still working commercially to cover the costs of hall hire.

Patrick says “I started auditions for the full time intake and found a bigger hall in Balaclava that was shared with the Jewish Community Centre. Before I knew it I had 30 wonderful dancers booked in to kick off with me at the start of 2007.” It was tough going at first, with Patrick devoting all his time and money to the development of the school. “Every cent I saved from dancing in Europe went to pay for the school. I can remember eating $5 Thai food every night and riding my bike around the block with the full timers for their morning cardio sessions. Negotiating using the hall on Jewish holidays and juggling my corporate bookings and gigs made a crazy Term 1. It was thrilling, exhausting, scary and demanding but so incredibly fulfilling.”

As luck would have it, towards the end of Term 1, Patrick was riding his bike through Prahran when he saw that Bartuccio’s Dance Studios were up for lease. He called the real estate agent and made an offer on the spot. The papers were signed, Patrick had 30 cents left in his bank account and it was announced to his students that they would be moving in Term 2. Within two weeks, walls were painted, new floors were laid, doors were fixed, walls were erected and the new space allowed the school to grow.

It didn’t take long for the school to develop a reputation and to see dancers become successful. Patrick’s hard work was paying off.  “I worked my dancers hard and pushed them every step of the way. I was driven and obsessed. I wanted my dancers to be the best they can be. I dedicated everything I had to making sure they had every opportunity to excel. The school grew fast. I doubled my intake of full timers and opened a new program for Juniors called the Elite stream and started to work as a choreographer. My first year of graduates were making a name for themselves, getting contracts in Wicked and Universal Studios Japan, one of my Juniors landed a role in Billy Elliot and we attended our first eisteddfods.”

By the third year of operation, PSA was almost shut down due to various issues with the local Council including what was considered excessive noise. With each complaint lodged by Council, Patrick was issued with a fine and then had to pay court costs to challenge each fine. He continued teaching and took more work outside of teaching to pay legal bills. For Patrick, it was “exhausting and incredibly humiliating. I was disgusted that a local council could be so incredibly vicious. I was teaching young dancers. The building was filled with laughter and joy. The local shops were filled with energy and excitement. It’s a disgrace that we were pushed and pulled, bullied and tormented – financially and emotionally. I refused to give in. Every suburb should provide places for children to explore their dreams and ambitions and every council should support that.” 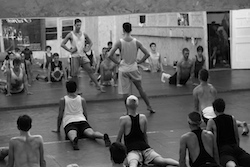 Eventually, Patrick had had enough and he transformed a new space in Port Melbourne which became the new home of PSA in 2012. The school now boasts a junior program for beginners, three elite squads, two full time years of performing arts classes, plus the full time music theatre program run by Andrew Hallsworth. There are 12 studios, a custom built theatre, pilates studios, a fully equipped gym, costume storage, set building rooms, offices, and a fully catered cafeteria. Then there is the school’s agency, Clover, which supports graduates and students alike that has a management arm to transition dancers into film and television both locally and internationally. Recently, Patrick has developed the High School of Performing Arts which combines academic studies with vocal, acting, and dance classes six days a week.

It’s been a tumultuous ten years for Patrick, but it’s been a decade that has seen the careers of performers develop and flourish. “From the little school hall to our incredible facilities the road was hard. The road was never smooth, it had bumps the size of mountains but every bump made me appreciate the incredible joys of watching my students succeed. Seeing them achieve far greater things than I could have in the industry is amazing. There is nothing quite like telling a student they got the job, or the look on a little one’s face when they get their aerial or triple turn for the first time.

“This is what I always wanted to do. Without my incredible team that has stuck with me for the past 10 years it would have been impossible. My students are trained by a fantastic group of people, not just talented teachers. I can’t do anything else and I’d never want to. I may have helped my students achieve their dreams but in the process of doing so I’ve achieved my own. I learn more from them each day then they could ever learn from me.”

PSA’s success and longevity is more than a result of Patrick’s talent and tenacity. “I think the biggest difference between PSA and other institutions is the professional environment our students are expected to train in. We place the same discipline and expectations on our students that a professional working in a company would experience. For us, attitude, work ethic, manners, and time management are of the utmost importance for all of our programs. Intake is by audition only for all courses and students come to PSA with the goal of becoming a working professional. It sets a very different atmosphere in the class when everyone is working towards a common vision. Having so many alumni working in the industry also sets a huge precedence and paves a path that the current students see. They know it’s possible, they know they can dream and work hard and achieve their dream.”

PSA will be celebrating its 10th anniversary this year in style, with 200 students flying to Brisbane to compete in the Brisbane Eisteddfod, weekly workshops for students with alumni performing in each of the current musicals playing in Australia, as well as a gala dinner where some of the stage’s biggest stars will be returning to PSA to perform.

“I feel by being pushed so hard in the training (at PSA) really showed how much you wanted a career for yourself and how far you’re willing to push yourself for opportunities. I decided to continue training overseas and audition for multiple schools in America and I now am moving overseas later this year to attend the Alvin Ailey School on full scholarship. The training PSA provides allows you to expand your knowledge of all areas of dance and makes you an all rounder. You have so many more opportunities then just sticking to one stream of dance.”

Euan Doidge completed the Musical Theatre course in 2011 and most recently played Marius in Les Miserable.

“Training at PSA definitely taught me what to do and what not to do. I learnt a lot about myself and I grew not only as a performer but as a person as well. Acting was definitely a class that took me on a journey of self-discovery. I was new to acting so to be put in a class that was outside of my comfort zone was the best thing I could’ve done.”

“At PSA we are trained by industry professionals who enlighten us with their expertise on auditioning and performing. It’s also a positive environment where teachers encourage us to work hard and strive for our goals and dreams. After I finish my training at PSA I would like to fly over to America and work in musical theatre on Broadway and have lead roles in film and television.”