When it comes to the world of cirque, there is something incredibly surreal, electrifying and mystifying about it all. Situated within the Lyric Theatre in Sydney, in a non-traditional theatre setting, the 360-degree seating configuration invited the audience into an intimate space. It was like drawing back red velvet curtains, and stepping into a whole new world: the realm of Le Noir – The Dark Side of Cirque.

Blanc, Rouge and Noir were the three distinct acts characterised by the intensity of the colours represented. Though open for interpretation, the theatrical elements that accompanied each discipline, such as the music and lighting, suggested ethereal purity, passion and danger, respectively. All acts were underpinned by the tongue n’ cheek nature of circus comedy driven by the Master of Ceremonies and support artists.

Blanc opened with Lira (Aerial hoop) being performed by Elena Gatilova, who ever so gracefully stole the attention of every spectator. Artistic embodiment translated through her movement assembled within the choreography. Gatilova elegantly executed each contour, line and shape with technical precision, whilst unfolding from one extreme extension to the next. Effortlessly suspended in the air, she vertically and horizontally weaved and intertwined her body from one adaptation of the splits and beyond.

Following the extraordinary opening was Anna Ostepenko, who performed the Hand Balance on three individual poles firmly integrated into the ground. The choreography for this act appeared somewhat sparse and at times, remiss. Ostenpenko was a technically sound performer with ample strength, but the piece seemed void of emotion and lacked creative movement. Perhaps for the trained eye, it was a little disappointing considering the expertise and beauty of the artist involved. Nevertheless, the skill of contortionism combined with her poise and balance made for a stunning routine.

In contrast, the Duo Silk presented by Dasha Shelest and Vadym Pankevych was affectionate, suggestive and held an element of surprise. Both performers were in-tune with one another in energy, and were therefore comparatively more dynamic and alert towards the piece.

In all, Blanc demonstrated the grace, balance and flexibility of the artists. Pure lines and extensions were embellished in white, nude and sequined costumes, and the varying use of height and space embraced the elongated tempo of adagio, commonly used in acrobalance and controlled compositions found within dance techniques. 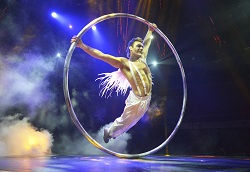 Rouge followed, encapsulating a little more grit, romance and raunchy burlesque flare. Skaters Jeronimo Ernesto and Jessica Ritchie were incredibly muscular, yet lean in definition, perfect for the aerodynamics required for such a performance that demanded speed and counterbalance intellect. As they spun at a radical speed just metres away from the audience on a tiny platform, Ernesto swung her to gain velocity. She hovered horizontally to the ground, dipping awfully close towards the surface. From there, each trick intensified, from a two-handed grip, to a one-handed grip, to linked feet around necks, concluding with the terrifying lasso with countless twists. Breathtakingly technical, both performers ought to be congratulated for risking their lives for such a performance.

The Trapeze and Strong Men acts followed, which demonstrated the importance of partner work, control and trust. As the show progressed, so too did the level of dependence between the performers, and consequently, required extreme upper body strength, athleticism, precision and timing.

Throughout the evening, each discipline was interjected with the Master of Ceremonies (a.k.a. the clown), who shamelessly brought up on stage the most awkward and shy audience members that found the stage to be the most foreign of territories. He directed them to assist with humorous circus gags, mimes – such as an air band, and other tricks. Along with the comical transitions came the sexy and darker side of Le Noir, with girls in feathers, sequins and little more than heels, risqué corsets and suspenders. The support artists provided a little eye candy for everyone – sculptured and handsome male torsos, and girls in next to nothing dancing sensually altogether. It was these elements that make the show perfectly unacceptable for kids. Whilst, circus arts is no stranger to the underground world of burlesque, cabaret and sometimes striptease, it would have been nice to see a stronger stage presence and dance technique from the support dancers, which in turn dropped in quality in comparison to the rest of the show.

The third section Noir was comprised of six acts, which consequently out did each other with one act being more dangerous and daring than the last. The performers were dressed in black leather, studs and raunchy outfits that built the show to its climax. Alexandre Lane was a brilliant stand-out performer with the Cyr Wheel and in his partnership with Emilie Fournier on the Aerial Cradle. As a true artist, Lane demonstrated épaulement (a French term derived from classical ballet where there is a slight twist of the torso whilst subtly twisting one shoulder forward), and thus created a dramatic, three dimensional line within his movement. Furthermore, his work contained a groundedness found in many contemporary dance techniques. These elements created a beautiful and unique quality in his work, particularly within the Cyr Wheel, where the performer is often angular or crouched.

Finishing the evening with a death-defying act, Carlos Macias and Angelo Rodriquez took on the Wheel of Death. Frightfully raw, edgy and somewhat wild in their Colombian flare, the pair kept the audience on edge, as they endeavoured to show off their mad men skills with one of the world’s most complex circus stunts. The act featured the two acrobats performing high-risk feats, leaving no room for error. Rotating within and without the high-speed rotating wheels, they ran, jumped and even tumbled high above the audience. Small stumbles and attempts to perform the stunt blindfolded left the audience concealing their eyes and gasping for air. Nevertheless, it was an exceptional way to finish the show.

Elegant, raunchy and dangerous, this is a must-see, jaw-dropping spectacle with some of the world’s greatest artists!

If you missed “Le Noir” in Sydney, be sure to catch it in Melbourne, Canberra, Adelaide or Queensland.