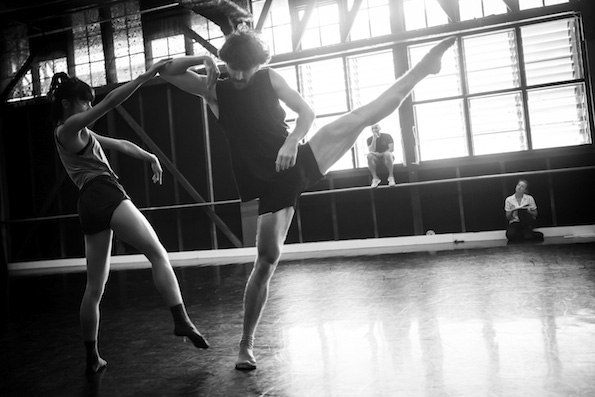 After a stellar 2014, Sydney Dance Company Artistic Director, Rafael Bonachela is prepping the company for an even bigger 2015.  With world premieres, local debuts of international works and touring, audiences are in for a treat.

Since taking the reigns at SDC in 2008, Bonachela has steered the company in a new direction by widening the repertoire and working to increase the popularity of dance by collaborating with popular designers, musicians and artists.

SDC is in rehearsal for the Double Bill Frame of Mind.  Bonachella spoke with Dance informa from the studio…

What were some of the highlights for yourself and Sydney Dance Company in 2014?

“2014 was our 45th birthday and we were delighted to share this celebration with so many Australians, presenting 78 performances in five capital cities and numerous regional towns across the country, from Albany WA to Dubbo NSW, and Cairns in tropical far North Queensland. Our involvement in Big Dance was another highlight, it was so much fun to be dancing with thousands of people in unison around the globe, and to bring thousands of dancers together on the boardwalk at Sydney Opera House. We also had a huge year of commissioning new works, nine in total, including five from young choreographers as part of our New Breed season. And we were thrilled to welcome guest choreographers Gideon Orbarzanek, Jacopo Godani and Andonis Foniadakis to the studios. Finally, it was a fantastic way to end the year, presenting our show, 2 One Another, in Auckland.”

SDC’s first season of 2015 is the double bill Frame of Mind which features William Forsyth’s masterpiece, Quintett.  Tell us about this work and why you chose to bring it to Australia for your dancers.

“I first saw Quintett in November 1998 at Sadlers Wells in London, and more than any other work I had seen before, it had an enormous and lasting impact on me. What impressed me most was that it’s an extremely physical work, incredibly technical and demanding, but at the same time it is very intimate and moving, expressing themes of loss, hope, fear, joy, tenderness and love – themes that we can all relate to. In bringing the work to Australia, I just really felt that the audiences here would love it. And as Artistic Director for Sydney Dance Company, I am always looking for new opportunities to develop our dancers, through giving them the experience of other choreographers. I’m really honoured that William Forsythe is allowing us to present Quintett – it’s a work that is very precious to him and this approval is not given out very often. Sydney Dance Company is one of only six companies in the world who have been honoured in this way. I couldn’t be more thrilled to present Quintett to Australian audiences, also as a tribute to Forsythe, whose work has been so influential and inspirational to me.”

The double bill also includes a new work choreographed by you.  What can we expect with this work?

“Frame of Mind is set to three music tracks by American composer Bryce Dessner, who many people will know as a member of the rock band The National. Just the sound on its own is incredibly powerful, when I found it, it just blew me away – it’s so vivid, alive, driven and glorious!  This music really related to my frame of mind last year. I felt that everything that I was going through personally, as an individual, was there in that soundtrack, that it totally embodied my frame of mind at that moment. In the studio, one of the first things that I did was to ask the dancers to think about the last year, 2014, and how they felt, their frame of mind, or different states of mind throughout the year. So the work has became about all of the narratives of all of their states of mind, in a way. We are still creating the piece so I can’t really comment on the final work, except to say there is an amazing sense of emotional drive and nostalgia. I’m also really excited to be working with Ralph Myers, who is creating the design for the work. We’ll be having a set – a quite romantic set, which is a departure for me. He’s really pushing me into different places.”

Bryce Dessner’s music will be performed by Kronos Quartet for Frame of Mind.  Do you think that incorporating more modern/popular music will entice a more diverse audience?

“Dance is one of those amazing artforms that uses so many other artforms in the making, if one feeds into the other, that’s a happy thing for everyone. I didn’t choose the music for that reason, but of course I would love it if Bryce’s fans were inspired to see the production. He is such a talented composer, of course he has mass appeal through his work with The National, but I love that he can transgress both rock and classical genres. The three tracks I have chosen are all from his CD Aheym, recorded by the Kronos Quartet, one of the most talented string quartets in the world, so it’s definitely a show for both dance and music lovers.”

Have you noticed an increase in audiences and greater popularity for contemporary dance generally over the last few years?

“I think it’s fantastic that the notion of contemporary dance seems less scary to people than it used to. I think audiences are growing more confident with the way that they approach contemporary dance, that they are understanding that they can overlay their own story on it, they don’t have to understand every move that’s going on onstage, they can just relax and enjoy it. I’m always really thrilled with the audience response to our shows, especially when we tour to regional areas, where there is often an opportunity to mix with people after the performance. It is so powerful when someone tells you that they were touched by your work. That’s why we do what we do.”

“We’ve just made our first international tour announcement for the year and are thrilled to share that we’ll be travelling to the Movimentos Festival in Germany in April.  All four of our shows sold out within just five days of tickets going on sale, which is such an incredible acknowledgement of the Company’s reputation overseas, that we are really proud of.  Stay tuned because we have more international announcements to follow. We also have a packed schedule of work ahead in Australia, including collaborations with guest artists including the amazingly talented Katie Noonan, and iconic fashion designer Toni Maticesvski. The dancers and I all love touring at home. This year we’ll be winging our way to Melbourne, Canberra, Adelaide, Darwin, Alice Springs, Hobart and Launceston, and around regional South Australia and Victoria. It’s such an exciting year ahead, which I am looking forward to immensely and know the dancers are as well.”

Frame of Mind opens at Sydney Theatre on March 6, ahead of seasons at Canberra Theatre Centre, opening April 30, and Southbank Theatre, Melbourne, opening May 6. For tickets visit www.sydneydancecompany.com.

WIN a Double Pass to a preview performance in Sydney, Canberra or Melbourne!
Just email Dance Informa at info@danceinforma.com and tell us who choreographed Quintett, which will be featured in Frame of Mind. Make sure to include your full name, date of birth, mailing address and a contact phone number. Competition opens February 3 2015 and closes Feb 25 2015.