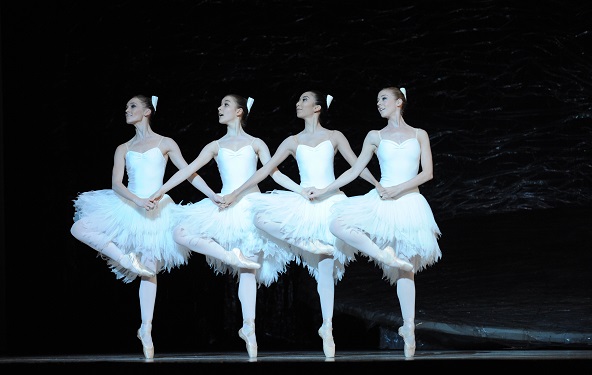 This stunning revival of Graeme Murphy’s masterpiece, now regarded by many as a modern classic, as performed by The Australian Ballet is musically superb and divinely danced.

Murphy cleverly transposes the old story onto the world’s most famous modern fairytale of Princess Diana trapped between Prince Charles and Camilla, and eventually betrayed and abandoned. But this is not overplayed, rather Principal Artist Madeleine Eastoe’s performance in the main role of Odette brought the ballet to new heights, in which, yes, the trappings of royalty were important, but proved peripheral to the main heart of the work, a timeless story of love, betrayal and revenge.

Musically, the score has been somewhat cut, adapted and re-arranged and is in some ways closer to the original nowadays. Under the dynamic baton of Nicolette Fraillon, Orchestra Victoria gave a splendid, finely detailed performance with ominous drums and woodwind and splendid, delicate violin solos.

The plot and structure of the work has been updated and changed from the traditional Petipa/Ivanov work we are familiar with, although Murphy quotes from them throughout (eg. the Cygnet pas de quatre, Odette’s solos) and there are tiny snippets of choreographic phrases from his Poppy After Venice and The Protecting Veil for example. Classical ballet steps are blended by Murphy with his own magical idiosyncratic style of contemporary dance that includes contractions, open hands, bodies held in fetal positions, a man holding a woman and swinging her in his arms, the ‘Murphy walk’, and arms tightly wrapped around the chest to signify anguish. Floor rolls are melded with liquid, floating pas de chats and sissonnes accompany somersaults.

On opening night here in Sydney at the Capitol, we were privileged to see an outstanding cast give tremendous performances. Madeleine Eastoe, Kevin Jackson and Ako Kondo gave outstanding performances as Odette, Prince Siegfried and Baroness von Rothbart (the destructive mistress in their doomed love triangle) in Murphy’s Swan Lake.

Kristian Frederickson’s glorious, lush, lavish sets and costumes are glamorous, dazzling and opulent. This Swan Lake is set in a sunny Edwardian world of elegant creams and greys, with an idyllic Royal Wedding and is sprinkled with dashing Hungarian Cossacks and other colourful European touches. Are we meant to pick up hints of Murphy’s Poppy in the design for the nuns headdresses? Frederickson admired fabric, embellishment, ease of movement for the dancers, and glamour, all of which shine through.

Eastoe’s performance as the doomed Odette was fluid and ravishing, heartbreaking and believable. Making the most of Murphy’s challenging choreography, she brought raw emotional intensity to the passages of despairing mental instability. Her Odette is at times insane, sometimes yearning and innocent, at other times coolly calculating and manipulative; not just empty technique or sweet princess.The swans here are part of her delusions, with Seigfried swept uneasily into their world. The ball here becomes a garden party, leading to a powerful conclusion of death and role reversals.

Jackson’s stalwart partnering in the very demanding duos was admirable, his performance of the anguished solos most eloquent. The role of Siegfried calls for massive stamina in order to sustain the many difficult lifts, and it also requires subtle acting skills, as in this version Seigfried must show the many layered character of a man who cheats on his bride at his own wedding and is forced to acknowledge his tragic mistake in the final act.

He reveals his remorse in the manner of many conflicted anti-heroes of ballet who express grief, anguish and sorrow as the curtain falls, as we see in Giselle, La Sylphide, traditional versions of Swan Lake and MacMillan’s Manon for example. Jackson was most empathetic and believable even while dancing the introverted, demanding and sometimes uptight solos in which he agonises over his choices.

From the opening column-like fluttering hands that begin the show, Kondo was fascinating as the Baroness, so elegant, witty and sophisticated that the Prince’s being besotted with her is completely understandable.

The evening was rich in cameo roles, terrifically performed by guest artists Matthew Donnelly, Colin Peasley, Andris Toppe, Shane Carroll and Frank Leo, who reprise their various character roles with their usual panache. Plus, the angular, intriguing interpretation by Murphy of the pas de quatre for the Cygnets looked much fun.

Operatic and epic in tone, telling a story of betrayal, revenge, despair and dying of a broken heart, this work shows emotions that many are familiar with, but with a deep intensity that few are able to experience. Both the emotion and the choreography dazzle the audience.