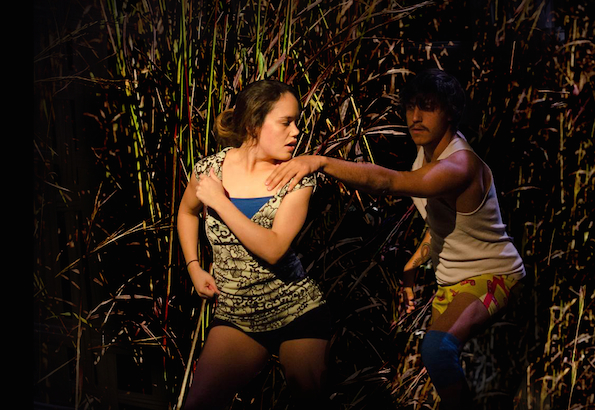 Drawing inspiration from the homeless population of Darwin and the women of Arnhem Land, choreographer Vicki Van Hout has woven a paradoxical tale of privation and paradise.

Sleeping rough is one thing; staying in the long grass is another. However, before we run away with the idea that ‘long grassers’ live a life of unremitting tragedy a bit of context is required.

It is estimated that every night in the greater Darwin area there are up to two thousand homeless indigenous people living on the streets. These fringe dwellers are said to be living ‘long grass’. Though the bald statistic is alarming and the societal and personal knock-on effects are enough to fill government reports and lurid tabloid scandal sheets, the reality on the ground is a more nuanced and paradoxical experience.

For renowned former Bangarra dancer and now choreographer/director Vicki Van Hout, the creative lure of the long grass was hard to resist. Indeed it has provided the inspiration and the title of her latest work, which will premiere at the upcoming Sydney Festival.

“I want to bring attention to the fact that there are no shelters up there,” she states. “In fact, the only real shelter is the evening ‘spin dry’. So y’know, if people have had a little bit too much to drink or they’re a bit fearful for their own safety then they can get into the ‘spin dry’, which is the colloquial term for the nightly lock-up. Not gaol, just a lock up that’s run by a philanthropic group.”

A lock-up which, as it stands, only has room for thirty eight people a night; a tiny fraction of the top end’s homeless population. “When you put it in those terms, well it is quite appalling,” Van Hout admits, “but at the same time we’re in the middle of a paradise. Y’know, it’s not like Sydney, where you see people lining up outside the National Library. So this show is kinda shining a spotlight on this paradoxical situation; but I’m trying not to cast judgement.”

Indeed it is immediately apparent that Van Hout speaks about Long Grass with a grace and humour that belies the shock/horror headlines. “It is dire, but people get by. Culture still happens and there is a community feeling and camaraderie.”

Whilst insisting that she is not looking to “romanticise” the situation, Vick Van Hout has clearly adopted a wide screen philosophical view. “Is this idea of community and valour just tied up with the commercial trappings of goods that we own? Can the person with the least inspire the most? It seems to me that at the bleakest times, this is when people rally.”

Aside from its “social welfare” angle, Long Grass is also about dance vocabularies, personal journeys and weaving. (Yes, weaving.) The five dancers and one narrator lead the audience through a linear narrative, with a smattering of text and video to create context.

As for the weaving, Van Hout says, “The majority of the characters are introduced when they weave their warp into a screen, which looks like the empty frame of a gate. I decided that I would try to meld the craft into the work so that the audience could appreciate it.” A beat later, she laughs, adding, “The next step will be getting the audience to create the set itself.”

Though she is a Wiradjuri woman from central and southern NSW, Van Hout has long been fascinated by the stories of the Yolngu clans of north east Arnhem Land. With Long Grass the choreographic connection is based around the Yolngu women’s practise of parallel walking. (Ordinarily, our walk is ‘oppositional’, meaning that our arms swing laterally opposite to our legs.) However, because she is also schooled in the traditions of Western contemporary dance, having trained with the legendary Martha Graham in New York, her dance language is mixed.

“Even if the dance looks as though it doesn’t have a pure indigenous aesthetic in some people’s terms it does begin its investigation in specific languages,” she explains. “But by the same token I don’t want to just out and out replicate them. If anything, this work has a different dynamic focus and tries to build a new vocabulary from that.”

Long Grass also marks a break from its creator’s penchant for more loosely structured works. “This is probably the most representational work I’ve ever made because the characters do have a linear arc. We experience what they experience from A to B, which is unusual for me.”

Conversely for Van Hout though, this production marks another step in her own gradual withdrawal from performance and into pure directing. With her trademark humour, she jokes, “Every year it becomes just a bit too much to put myself in. I wanna give other people a decent chance too. That doesn’t mean I’m not going to be on stage again sometime; y’know, before my body totally claps out.”