Canberra-born Australian Ballet coryphée Dimity Azoury beat five other finalists late last year to become Telstra Ballet Dancer of the Year 2014. Recognised as one of the nation’s most prestigious ballet prizes, the Award is worth a cool $20,000. Perth’s Imogen Chapman won the Telstra People’s Choice Award, worth $5000. Dance Informa caught up with Dimity to congratulate her on her outstanding achievement.

Dimity, huge congratulations from the entire Dance Informa team! How did you find out you had won the title?

“The award was announced on the Sydney Opera House stage at the evening dress rehearsal of The Nutcracker. It was such a surreal experience — I received the most beautiful bunch of flowers and had the entire company throwing streamers at me (it seems to have become a tradition to throw the streamers at the winner’s head!). Afterwards I had congratulatory hugs from everyone, which takes some time with the entire cast of The Nutcracker on stage! It was a very special moment.”

Tell me about the process you had to go through as a Telstra Ballet Dancer of the Year nominee.

“We were nominated at the beginning of this year by our artistic staff, principal dancers and previous Telstra Ballet Dancer Award winners.  We were watched throughout the year, wrote an essay about ourselves —both artistic and personal (possibly the most challenging aspect!) —and finally had an interview with a panel of six judges.

This year we also had the opportunity to create mini documentaries celebrating our nominations and Telstra’s 30 years of sponsorship of The Australian Ballet. It was a wonderful experience and was a particular highlight of the year for me [see video below].

I was given a lot of freedom with my element, paint, to see how many ways I could move the paint around my body and the space around me. I’ve never been involved in anything like that before and it was a fantastic, messy experience. Although I did have a slightly blue tinge to my whole body for days!”

What does this award mean to you on a personal level?

“In my first year with the company, Kevin Jackson — a dancer who I love and admire as an artist and friend — won the award. Six years later, to win the award myself, is an incredibly overwhelming, special feeling.

I think that’s the best aspect to this award. It’s an in-house award and the dancers who nominate us are the dancers who I look up to every day. They give me constant inspiration and motivation.”

What will you do with the prize money?

“I’ve already put the money on my mortgage of my little run-down 1890s Victorian cottage in Melbourne. That was a pretty amazing feeling! I’ve decided to leave the money there for the time-being until I can redraw it to make the cottage a little less run-down!”

When did you first know that you wanted to dance professionally?

“I think I’ve always wanted to be a part of this world. I have dreamlike recollections of images of romantic ballerinas and vividly remember the first time I saw the strength and athleticism of contemporary dance in Quick Brown Fox created by Leigh Warren and Dancers. When I was little I wanted to be a famous ballerina veterinarian. I’m not sure when I decided that I would focus on the first part of that dream, but maybe one day I can achieve both!” 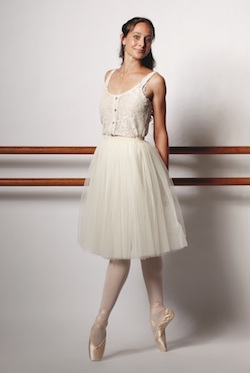 Dimity Azoury of The Australian Ballet. Photo by James Braund.

Tell me about your grandmother — the one who wasn’t allowed to dance. How did that affect your own dance journey?

“My grandmother danced in New Zealand right up until she married my grandfather, an Australian Naval Officer, and moved to Australia. I knew this from a young age because of the photos in her house. My particular favourite was one of her gently posed in a beautiful romantic tutu. I used to watch videos of The Australian Ballet whenever I was at her house and have always known of her love of dance.

It has only been recently that I have discovered just how much she loved it, how much she would have liked to pursue it on stage and how she was influenced by the Ballet Russes visiting New Zealand. Unfortunately, that was never an option for her because it was deemed inappropriate for her to be on stage.

I think that has affected me more and more as I’ve come to understand what that means. My own family has always been so supportive of my dreams and I can’t imagine what it would be like not to have that support. I know that my dancing brings her joy and I can’t wait for her to see me dance at home in Canberra next year in Giselle.”

At present you are a coryphée—what is the schedule of a coryphée like?

“The schedule of a coryphée is almost exactly like that of a member of the corps de ballet, with an occasional glimpse into the world of a soloist. In our recent season of La Bayadere, for instance, I was lucky enough to perform the second shade solo in Act 3. I performed in my corps spot one night, and then possibly performed a solo the next night. My work load varies a lot depending on the opportunities I’m given.”

Have there been times when where you felt like giving up? If so, what kept you going?

“I’ve never felt like giving up, but there were several times when I’ve doubted my ability to succeed in this profession. I’ve always been able to channel the self-doubt constructively so that I just work harder to make sure that I do succeed. But sometimes it does feel overwhelming and it’s hard not to question your own ability or worth as an artist.”

What do you consider to be your strength as a dancer?

“I have a sincere joy of dance and I try to let that show when I am onstage. I have a natural jump and I love it — it’s the closest feeling that I have experienced to flying and feeling the wind in my hair on stage! I’m a hard worker and I’m very determined not to hold anything back while I have the opportunity to work with The Australian Ballet.”

What do you do when you’re not dancing?

“I have a Scottish Deerhound called Gunther who gets a lot of love, walks and attention. Our morning walk before work and afternoon walk before the shows are very important for me and are my favourite times of day. That’s the time when I can relax and just enjoy being outside with my husband, Rudy [Hawkes, Senior Artist with the Company], and Gunther.

Rudy and I also really enjoy mountain-bike riding and we spend a lot of our time driving out to the fantastic trails around Melbourne. We have ten bicycles in our household and they all get ridden!

I also like to study whenever I can to prepare myself slowly for the day when I have to go back to school. This year I completed a unit of Chemistry through Open Universities and next I’m enrolling in Physics.”

“Dancing. I don’t really mind where, studio, stage, supermarket or home, but that’s the most wonderful thing about my job: that I get paid to do what I love!”