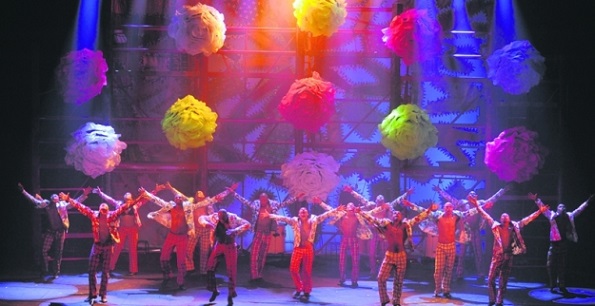 With its colour, exuberance and chaos, Baila Brazil captures the essence of Brazil. There is a rawness in these self-taught dancers that is refreshing and evident in their joy and desire to constantly push boundaries and take risks with every move.

Brazil’s Balé de Rua Company returned to the Sydney Opera House with the same colourful and chaotic energy that entranced us in 2010, plus a renewed determination to encompass and celebrate its nation’s festive culture.

Their new production, Baila Brazil, opens with a witty sequence of two white-suit-clad and panama-wearing “malandros” (a kind of street folk hero) dancing with quicksilver movements that is a cross between the hot shoe shuffle and carnival samba. Demonstrating that music and dance are rarely separated in Brazilian culture, the dancers accompany themselves with small hand-held percussion instruments, tapping irresistible rhythms. We feel an immediacy in this open invitation to come and join the party.

Loosely structured, the show moves from sinuous samba to hyper-competitive hip-hop dance battles to graceful martial capoeira and an underlying theme of African dance and rhythm. The production showcases the vibrancy of Brazil’s African roots, which energized and formed a myriad of music and dance cultures across the country.

But just as important as the cultural traditions, Baila Brazil strongly reflects the company’s origins: a group of street dancers discovered by Artistic Director Fernando Narduchi back in 1984. From these humble and tough beginnings in the Minas Gerais region of Brazil, Balé de Rua became a company in 1992 and found worldwide recognition after appearing at the Lyon Biennale de la Danse in 2002.

These dancers continue to excite audiences with street dancing that is gutsy, competitive and ready to explode. Their performance ethos seems to be ecstatic, acrobatic improvisation and open to a myriad of influences.

Together with choreographer and costume designer Marco Antonio, Balé de Rua wanted to “create a new kind of dance… inspired by our heroes, Michael Jackson, MC Hammer [and] James Brown, then mix this kind of dance with Brazilian rhythms and to take risks.”

Narduchi places a high value on “the storytelling of dance,” although Baila Brazil’s story is not of the structured variety but more like a pastiche with an abundance of colour, sound and movement, fuelled by an overabundance of energy. 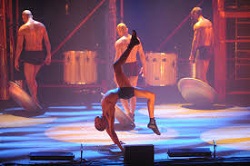 Reminiscent of a Rio carnival parade, with each segment containing its own costumes, choreography, sets and dramatic “fantasia”, there is no apparent connection between the numerous scenes. Nevertheless, there is no doubt as to the cultural origins of this performance and how each segment is united to the overarching theme of ecstatic creativity and celebration.

As seen in their capacity to play and accompany themselves with percussion instruments, the dancers perform with an unerring musicality. Even during the showiest segments of competitive break-dancing and acrobatics, rhythm is never sacrificed for bravura.

Baila Brazil is a male-dominated show, 13 males in fact, with no complaints from this writer in relation to their bare-chested competitive alpha dance moves. And not to be outdone, the two females play equally important roles. One female dancer offsets the masculine rawness and bravado with her sizzle and sparkling footwork, while the other female presence essentially directs proceedings as the lead singer.

While the music throughout the show contains a number of carnival classic songs, they are all sung live and performed by the leading lady, interspersed with support from the dancers, hence performing dance or music is almost interchangeable throughout the show. This live element makes the show’s structure quite loose and flexible rather than a tightly orchestrated affair.

And whilst celebration and a carnivalesque theme unites the show’s diversity, the absence of any darkness or shade to contrast the essential joy risks creating a sunny sense of monotony.

But for the majority of the audience there is no escaping the infectious energy and rhythms of Baila Brazil and the delirium of delight that these dancers exude whenever they hit the stage. The words of Narduchi are personified on stage – “I want you to be happy from the heart because it is so urgent.”

When Balé de Rua returned to the Sydney Opera House in 2015, they came with the aim to move from the streets of Brazil to the country as a whole. There is no doubt that this is an ambitious quest with a country as large and diverse as Brazil, but Baila Brazil demonstrates that their abundance of energy, creative chaos and rich musical and dance tradition can be further mined into the future.