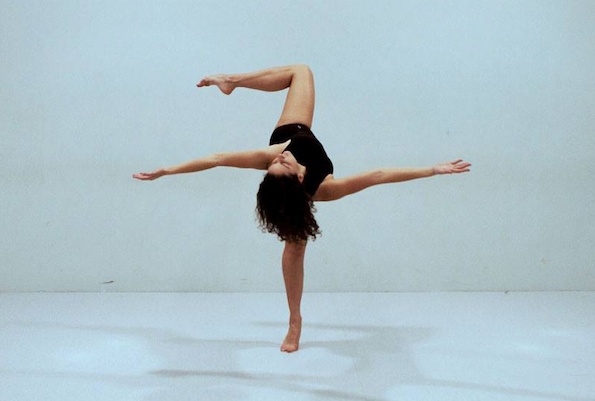 Often for young dancers, injury is never considered in our plans. On top of this, a small niggle or slight pain is often treated by our usual physio, the adequate therapies applied and we trust that in a few weeks, maybe months we will be back and performing at our optimum rate. But as dancers and athletes we must recognize that injury may just be around the corner and consider how this would affect both our plans and training.

Meet Sophia Natale. A national state calisthenics champion, who was accepted into John Curtin College of the Arts on scholarship, a 2013 WAAPA dance graduate who performed the lead role in several performances throughout her training and graduated as critics “Dancer to Watch”. She also completed her final year of training not knowing she had a fractured spine because it was misdiagnosed.

“It was during a really intense rehearsal time in May last year.  I remember being drilled over this one particular move in a particular duo. We did the same move again and again and I didn’t feel any pain whilst practising it that day. But going home that night after cooling down something definitely felt different in my back” says Sophia. “After the performance season ended, I still had the pain. I went to my physio, who said I just had tight muscles around my lower back and to keep doing what I was doing.”

In class during her performances in China, also with her misdiagnosed injury. Photo by Rachel Forster-Jones.

After being diagnosed with “tight muscles around her lower back” Sophia persisted with this pain for the remainder of the year still participating in secondments with major dance companies and with WAAPA’s daily work load. “The secondments weren’t too bad, I was still under the impression that I just had tight muscles so I just kept up with the maintenance of it. The adrenaline of just doing class and being with the company was pretty motivating in itself. We went on tour to China in September, and it was there that it definitely was at its most painful. It got to a point where I almost didn’t perform.”

As dancers, it is very easy to put aside the cries for help our body often provides and with such strong mental strength we feel we can overcome any physical pain. Sophia had been prescribed pain killers to aid her diagnosed “tight muscles” and dramatically changed her own warm up routine. “I changed my warm up routine to something a lot lighter, but other than that I kept thinking it was definitely mind over matter. The teachers at WAAPA were so supportive as I kept them informed along the way. To get through performances, it was definitely the pain killers that helped me. But for the day to day pain I didn’t like using the pain killers because it just felt like I was putting a band-aid on and forgetting about it.”

Once the pain had not subsided within 4 months and along with the knowledge of her own body, Sophia pushed for further investigations into the pain in her back. “It had been 4 months of pain by this stage, and numerous physios, OT’s, Chiropractors, pilates and yoga classes and I even went to a Arthritis Specialist. I was fed up with being told the same information, and no treatment working, and the most important thing to me at the time was finishing my diploma at WAAPA. As soon as I graduated I saw a back specialist and pushed for scans.” These scans revealed that Sophia actually had a fracture through her 4th and 5th Lumbar spine.

“If anything, finding out was a sigh of relief, as at least I knew what was wrong and I knew what sort of time frame I was looking at until full recovery.” By this time, Sophia had already completed her course at WAAPA and immediately had to reconsider an upcoming performance she was in rehearsal for. She also had to reconsider her plans she had for her first year out of training as a large part of her rehabilitation mainly consisted of rest.

“For me rehab has been mentally, extremely difficult to get through, but luckily I have incredible family and friends around me helping in anyway possible” says Sophia. “As a dancer, our bodies are our number one tool. There are so many ways to look after it to make sure we are always performing at our very best for the given circumstance and often its hard to keep on top of them all simultaneously when life gets busy. Given that, I think I definitely took my body and my physicality for granted.”

The most common cure for any injury is rest, however, we often deny ourselves this as dancers. This article is written as a reminder to treat injuries with complete sincerity and to trust you knowledge of your own body particularly if you feel that your ailment does not seem to be getting better during the prescribed time.

Sophia in rehearsal in China during her misdiagnosed injury, with dance partner Sam Young-Wright. Photo by Lonii Garnons-Williams.

Sophia has not danced since finding out the truth about her diagnosis and has since been resting her spine, with the occasional swimming and Pilates. “I think the biggest piece of advice that I can reinforce coming out of an injury and into rehab is just to listen to your body and be 100% in tune with what’s going on. If you feel a little niggle that wasn’t there the day before, pay attention to it. Do not ignore it, and especially do not let it get worse. See someone or do something about it ASAP. Early prevention can be your saviour.”

Sophia’s last piece of advice for young dancers or anyone battling an injury? “I also think it is really important to have other interests outside of dance. Whatever it may be, keep an interest in it and keep working towards these other goals. It is scary that a career ending injury can happen unexpectedly and you’ll save yourself a lot of stress if you have another passion that you would love to pursue as a career.” And just like her advice, Sophia has spent the year pursuing her interest in photography and will slowly begin to return to dance during 2015.

You can view her work here https://www.flickr.com/photos/natale5/

Photo (top): This photo was taken by Sophia’s brother Paul Natale at the start of her pain and after she was told it was caused by tight back muscles.