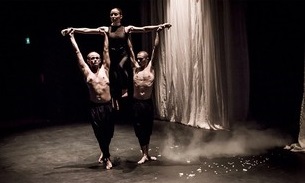 Sorry readers but I was most disappointed in this! The second work by Lucy Mary–Claire, under the company name of Dance Dr, we saw Metamorphosis. The work purported to “encapsulate the human form through a series of anecdotal pieces” (i.e. short vignettes) of solos, duets and ensemble work, etc.

There was no set as such, just two white gauzy drapes with a black backdrop. The lighting design was most effective, subtle but sometimes stark and dramatic with an interesting use of silhouettes at one point. I liked the elegant cut of the black costumes the cast wore.

Technically, the dancing by the excellent cast of nine was terrific, but I got the feeling the dancers felt constricted and squashed on stage and were holding back especially in their jumps. The ensemble work was great with a ritualised, stylised feel and there were a couple of exciting solos in the second half especially, but there was no real sense of emotional engagement with the audience: it was all coldly neutral and abstract. The choreography was uninspired and repetitive, an uneasy mix of (mostly) barefoot contemporary style, gymnastics and some pointe work was included with possible hints of Balanchine influence. There were lots of use of angular arms and rolling floor work, and pirouettes were mostly performed with tight, enclosed arms. Generally the jumps seemed rather awkward and showy/gymnastic in style, rather small, low and ’held in’. 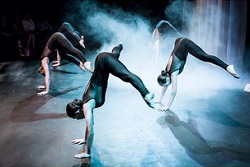 The small cast included seven women and two men who tried valiantly but just missed succeeding. The two guest men, Wayde Gee and Rob Thompson, did not really have that much to do. We saw their excellent partnering and combining of martial arts/tai chi influences in a very brief fight duet Pride but that was about it.

A major highlight would have to be Maddison King’s Shedding solo in Act 2 performed in silence. It was intense, slithery and dramatic, with angular arms, exploring space. Pamela Diaz’s performance throughout was tremendous too.

The finale, with the metallic reading by Tim TJ Eaton of Mary Shelley’s A Frightful Fiend Doth Close Behind You Tread, was most effective but also in some ways repeated the opening. Were we meant to think of Frankenstein and his Creature?

The short evening was a blend of ensemble work, solos and pas de deux/quartets, based on the idea of Metamorphosis (e.g. caterpillar to butterfly). The concept behind the show was great but to me, it still needs lots of work.