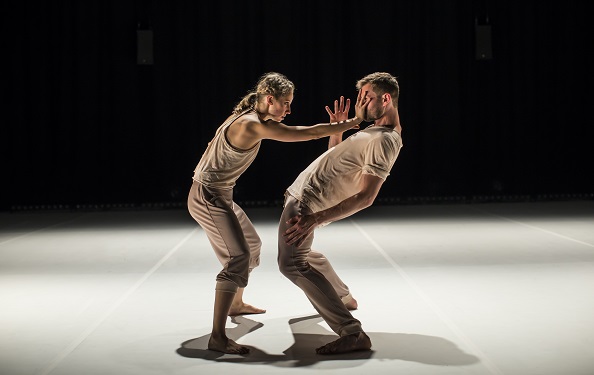 Five short new works under the umbrella title New Breed marked the first of a new partnership between Carriageworks and Sydney Dance Company, supporting and encouraging the development of choreographic talent. Selected by Sydney Dance Company Artistic Director Rafael Bonachela, this short premiere season gave the choreographers an opportunity to create a work with the fabulous members of the company. For these performances, there was no real set, just the bare walls of Carriageworks, heavy lighting rigs and a white tarquet floor. However, Matthew Marshalls’ fabulous atmospheric lighting enhanced the glorious performances.

The opening work White Elephant by Lee Serle, inspired by the works of Australian artist Stephen Bush, was most unusual and confronting. The idea was that the dancers inhabit the surreal landscape and are the landscape. The cast at the beginning was playing with sculptural piles of origami. Sometimes there was an emphasis on correct, almost rigid, balletic epaulement. There were repeated phrases of movement, and wonderful unified ensemble work that was contrasted with frenzied individual movement. Bernard Knauer had a stunning short solo and was on a very high relevé, almost en pointe. Abar the Elephant is one of the characters and there is a trio for him prone on the floor with two of the women.

Charmene Yap’s Do We was a magnificent pas de deux for Holly Doyle and Bernard Knauer in elegantly casual beige costumes. There was a relentless, driving rhythm as provided by Gypsy Mandolin. The dancing was lean, powerful and athletic with unusual partnering, a wonderful line and terrific jumps. It had a gripping, intense atmosphere and there was a very effective use of echoing/mirroring.

The third work was Cass Mortimer Eipper’s Dogs and Baristas, inspired by the idea of us all needing portion sized friendship. It opened with a white corridor of light and included speech and guttural sounds, claps and slaps. There were some repeated phrases of movement – at times the dancers appeared to be sculptural machines (coffee machines, given the work’s title?) Glorious softly padded jumps were contrasted with angular movements. Special mention must be made of the sensational solo for David Mack.

Juliette Barton’s Scrutineer was an intense, crackling solo that dazzled. It was about the art of looking – and who is observing whom. Barton was in a short, revealing brown shift and beige socks, her sensational dancing is full of creamy movement, a laser sharp line combined with the use of a very flexible back. Undulating arms and a deep Graham-style plie are used as well. The final section of this work was a twitchy, disturbing and nightmarish segment that used a long black bench as support. Rolling floor work is included. By the way, flickering, pulsating strobe lighting was used, which some viewers might find quite disturbing.

Based on the idea of exploring space, the final work, Gabrielle Nankivell’s Wildebeest, was extremely strong and powerful. The thinking behind the work was that underneath it all we are animals. The dancers were mysterious alien beings, or were they meant to be Frankenstein’s creatures? On a stormy night, Luke Smile’s soundscape throbbed and crashed. Laser-sharp leg lines were contrasted with fluid, rolling floor work. Formal, stylised choreography was contrasted with runs and some most unusual lifts. Were we meant to pick up allusions to Matthew Bourne’s Infernal Gallop? Janessa Dufty’s long solo concluding the work was amazing.

Overall, this was a fascinating, most exciting programme!

Photo (top): Do We being performed by Sydney Dance Company in New Breed. Photo by Peter Greig.