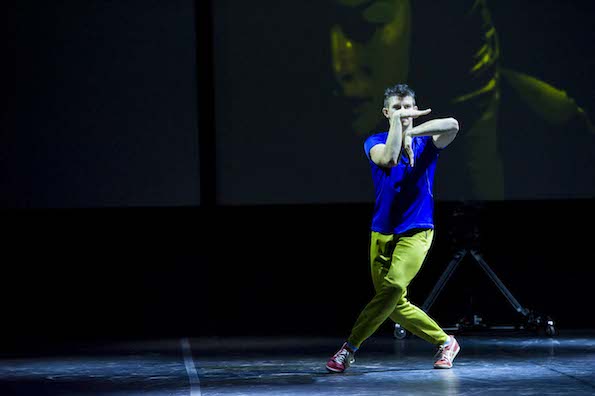 Garry Stewart’s Australian Dance Theatre is preparing to celebrate 50 years of terpsichorean splendour, preceded by the triumphant return to Adelaide of its multimedia spectacular, Proximity. Dancer and teacher Scott Ewen, who has been involved with ADT for four years, was kind enough to take time out of his busy schedule to share his experiences and insights.

When Elizabeth Cameron Dalman set out to “open the horizons for provocative contemporary dance” with a performance at Adelaide’s then new Shedley Theatre in 1965, South Australia was gifted with a company that would continue to challenge expectations and enrich audiences for the next half century. Typifying the kind of dedicated practitioner that the Australian Dance Theatre has tended to attract over this period is Scott Ewen, a passionate and articulate proponent of human movement who teaches public dance classes at ADT and has toured extensively with the company.

“I graduated from the Western Australian Academy of Performing Arts with a Bachelor of Arts in Dance and a Certificate II in Theatre,” said Ewen when asked about his personal journey. “In October 2010, when I came to ADT for a secondment week (in which secondary and tertiary students are given the chance to be “fed out” to select schools), I was offered a position with them after four days. This enabled me to attend a wide variety of classes and my first job was a three-month tour of Europe and the UK. I then took some time away to work independently for six months at Tasdance in Tasmania, before returning to ADT in 2011, where I have been full time since 2011.”

When asked, Ewen is hard pressed to isolate a particular “standout” moment with ADT as he feels that every day with the company has provided a wealth of rich, fulfilling experiences, especially upon the world stage.

“We get to represent our country every day at work,” he enthused. “We get to share our culture and experiences with the rest of the world. International touring is great. And it’s not about the fame. It is actually often humbling, working with the most wonderful, generous, creative minds. You really are helping to craft a space where you are accepted.”

And that is a critical point with ADT, according to Ewen; acceptance and inclusivity have characterised the group’s classes from the beginning. Part of the reason that ADT’s adult ballet and contemporary dance classes attract beginner and intermediate students ranging in age from 18 to 65 and beyond is that teachers like Ewen strive to “avoid being too judgmental, and to avoid having students focus too much judgment upon themselves.”

This is not to suggest that the training is not rigorous, however; lessons traditionally begin with a warmup, then transition to the all-important phases of coordination and alignment, with a focus on safe dance practice and body awareness.

“Then we get right down to the dancing,” Ewen said. “After all, that’s what we’re there for. And for the more experienced dancers, these regular classes can often provide a fun outlet for social interaction.”

He speaks warmly of the camaraderie and mutual support that inevitably develops among ADT’s members and students.

We press on, because Scott is eager to speak about Proximity, which begins in 2014 with its return season in Adelaide, where it was born.

“Proximity is a collaborative work between our director Garry Stewart and Parisian video engineer Thomas Pachoud. It is an amazing show that incorporates cutting-edge live video manipulation technology, nine dancers, three cameras and a massive screen projection,” he said.

A vibrant musing on the body’s interaction with the world through its own perceptive framework, channeling the philosophy of Merleau Ponty, Ewen describes Proximity as being about “the extension of self and our relationship with the world.”

Proximity is given thematic weight through the contemplation of scale as it applies to perception, seeking new ways to interrogate relativism. “The way I like to put it,” said Ewen, “is that the work makes the small large, and it makes the singular plural.”

Bodies play out the arcs of their movement through space like semaphore signals or hieroglyphs narrating their own sensory impact. Bold gestures include “tutting,” a hip-hop technique that incorporates dynamic hand and arm movements. And it is all magnified by the prismatic effect of doubling via real-time multi-angle projection, encouraging the audience to select from multiple viewing options at any given time.

The new run of Proximity represents its fifth incarnation; premiering in Adelaide in 2012, it went on to two European tours and a season in Melbourne. Returning to the city of its birth on the eve of ADT’s 50th anniversary, it represents a triumphant celebration of the company’s long-standing integration of contemporary dance innovation, audio-visual spectacle and philosophical inquiry.

Ultimately, Ewen articulates Proximity’s fractal ideology with a phrase that appropriately echoes ADT’s spirit of inclusion; its elevation, through movement, of the dignity of the self: “If one thing matters, everything matters.”

Proximity’s Adelaide season will run from November 6 until November 8. Bookings can be made via Bass online. The Australian Dance Theatre’s new 50th anniversary season launch will then begin in December. According to Ewen, this promises to be “something really special.”