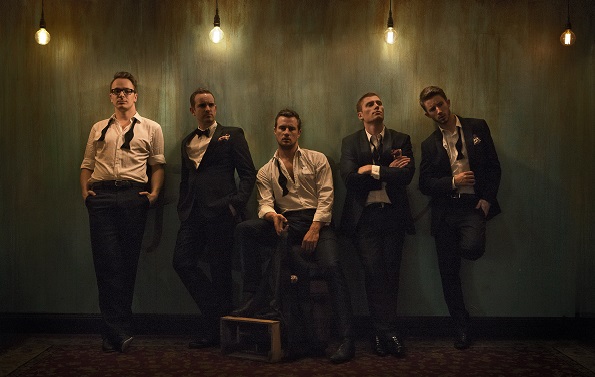 The Tap Pack name remains synonymous with brilliant tapping, but since its debut in Sydney a year ago, this Aussie grown show has undergone a transformation that could see it now rival some of the major musicals playing across capital city theatres.

With a fresh approach to the storyline, the audience follows the journey of Aussie busker Blue, played by the multi-talented Jesse Rasmussen, as he sets out to fulfil his dream of tapping in New York City.

Right from the get-go, the audience is greeted with Blue busking and chatting to patrons as they make their way to their seats. He cheekily passes around a hat asking for loose change to fund his journey to New York City. A dream sequence soon avails and we meet Four Play, a group of four Yankee hoofers dressed in 1940s suits that have a cabaret style show paying homage to the original Rat Pack.

Newcomer to The Tap Pack, Christopher Horsey plays Marty, the original Four Play member and leader of the pack. His quirky brother Louie is played by Jordan Pollard. Rounding out the group is Ben Brown as the smooth crooner Junior and Thomas J. Egan playing the slow witted, but fast footed, Tommy. With their cabaret style production on the verge of closing, Blue could be just what they need to reinvigorate their show.

Backed by The Tap Pack Bandits live band, the show transports audiences to the Rat Pack era with classic cool, old school tunes, with hits by Cee Lo Green and Beyonce seamlessly peppered throughout the storyline.

The energy and passion of The Tap Pack is contagious. Their technique and stamina will leave you breathless. This show takes Australian tap dancing to another level with impressive cross-rhythms, and fast, hard-hitting beats. Rasmussen sets the bar high with intricate rhythmical patterns that make difficult combinations look like a piece of cake. Egan once again pushes the boundaries with a flawless tap solo, and there was magic on stage when Horsey and Rasmussen have a Tap Off, showing the breadth and skill of both dancers. The Tap Pack has the right balance of drama, dance and humour and is superbly directed by accomplished theatre performer Nigel Turner-Carroll.

After a standing ovation, the lights of the theatre were slowly raised with an audience member shouting “I want them to do it all again!” If the aim of the game in show business is leaving the audience wanting more, The Tap Pack most certainly did that, and in my opinion that’s the best review you could ever ask for.