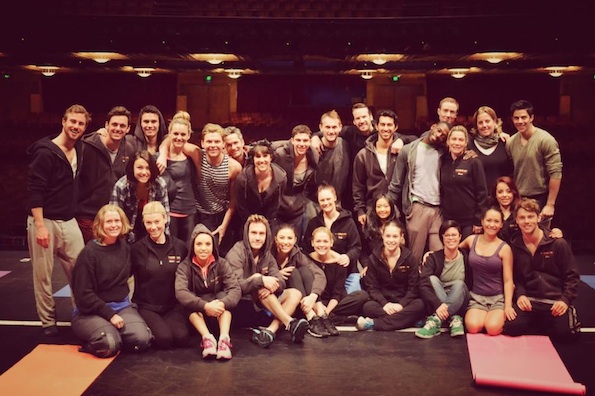 In an interview with Dance Informa, Siobhan Ginty talks about her career transitions.

Whether you have just graduated or have been working in the industry for a while, there is often a lingering worry about what the next gig is going to be. Even when you take the best possible care of your body, there will probably come a time when you need to make the move to something other than performing. Options might include teaching, choreographing, directing, producing or changing careers completely. Dance Informa recently talked to Siobhan Ginty about her career and how it has progressed from commercial dancer, to musical theatre performer to being an integral part of a creative team.

Right now in your career it might not be possible to see anything other than performing. At some point, however, there might be an “ah-ha” moment that will plant a little seed of a future possibility. Siobhan Ginty has had a few of those during her career.

Ginty started out as a commercial dancer having trained at the McDonald College. Then she completed a two-year course at David Atkin’s Dynamite Dance Studios. Training at Dynamite led to her first professional job, which she started during her second year on advice from one of her teachers, Marie Ploski.

Ginty recalls, “It was Marie who encouraged me to take the job, which was at South Sydney Juniors, as it was a great first job and was like a right of passage for dancers at the time.”

After working regularly in Sydney for a few years, Ginty then moved to Melbourne to expand her training at the National Theatre Ballet School. During her time, she continued to work as a commercial dancer doing gigs like cheerleading for the Melbourne Tigers and other corporate work.

She toured with a number of big stage spectaculars before moving into musical theatre. At this stage, she still considered herself a dancer, not a singer. Her first musical was Showboat, which only had one or two big dance numbers in it.

“I was such a dancer at the time. There was a lot of stage time but not a lot of dancing,” says Ginty. “There were many great things about this show but the best thing was that, straight up, I was an understudy and covering a principal.”

This meant that Ginty was thrown in the deep end had to rehearse twice a week in the role with the whole cast. She had to overcome her initial fears and realise that she could, in fact, sing. Working with the Musical Director David King, now Head of Music Theatre at WAAPA, really gave her the confidence to accept that she had a voice. This was in spite of the fact that she never actually got to perform the role.

The realisation that she could sing came from working on the solo songs for the principal role she was covering. “I knew I could sing but never thought of myself in a leading singing role,” Ginty remembers. “Back then, I still considered myself a dancers’ dancer. It was a tiny role but it was the first time I thought, ‘Oh, I can do this.’”

There were a few more shows and a few more tours (Happy Days, Streets of Dance, Rugrats Live) before the show that would bring Ginty the biggest learning curves and insights about the future of her career. Ginty was cast in the Melbourne production of Witches of Eastwick. Once again, she had a few understudy roles but also had her own character for the whole show, as did the whole cast. This is very rare for a musical and allowed for great expansion of skills.

“Every morning for the first two weeks of rehearsal we played drama games after warm up,” recalls Ginty. “This involved everyone, the whole cast, from Marina Pryor down to little me playing Marcy Wills. This developed strong characterisations, relationships and interactions, and really created the sense of the town through the rehearsal process. It really opened me up to acting for the first time.”

There are many musicals that just rehearse the routines and the musical numbers without delving too deeply into the motivations and characterisations of each individual role. This is where Witches really stood out for Ginty and helped her grow as an all-around performer, progressing beyond just being a dancer.

“I completely adored that rehearsal process because it was so invigorating and fun, even though it was scary for me. I also know the energy and depth translated to the stage,” says Ginty.

The show was staged by the Cameron Mackintosh team after a successful U.K. opening. James Powell, who is currently directing the Australian production of Les Miserables, was the associate director and Geoffrey Garratt, who is also currently working on Les Miserables in musical staging, was the associate choreographer. After seeing what their work entailed – travelling the world with their repertoire of exceptional shows, Oliver, Miss Saigon, Witches of Eastwick and Les Miserables, and choreographing and staging shows in exciting major cities – Ginty thought, “Oh my, I want your job!” It opened her eyes to what lay beyond being a performer.

After The Witches of Eastwick, Ginty had to return home to Sydney as a close friend passed away suddenly and at a very young age. She realised that life can end at any moment and took the plunge to move to London to pursue roles in musical theatre. “After Witches, I was so inspired and had learnt so much that I was going to London to work,” she says.

But work wasn’t so easy to come by. It was hard and frustrating. There were many more auditions in London and Ginty went to them all. She was set on landing a role in a West End musical. “Again, I did lots of commercial work and some teaching. And the biggest gig I got was in Cinderella, the pantomime.”

Ginty’s agent was excited as it was the biggest pantomime in the U.K. and actually paid better than many of the West End shows, but Ginty had her heart set on something a little different. Despite putting her heart and soul into this dream, nothing was coming her way. So, Ginty made a very tough decision. She quit.

“I had had enough. I quit the industry and, surprisingly, it wasn’t awful,” she reveals. “What I also noticed happening was that I didn’t want to go to dance classes anymore, and I was such a dancer.”

Even when she was living in Sydney and Melbourne, Ginty would go to classes in her spare time. But, realising that her love for dance had died, she decided to let it go and focus on something else. Having always trained in Pilates, Ginty decided to move back to Sydney and study to be a Pilates instructor, giving up on a career in the performing arts. But her retirement didn’t last long.

Once the word got out that Ginty was back in Australia, people started calling her up for gigs. So she did a few little things here and there, but was still thinking that she was on the way out. It was then that the next big step in her career appeared. Ginty was hired as the assistant choreographer for the 2006 Commonwealth Games in Melbourne. But not only that, on the same day as her interview for the Commonwealth Games, she also auditioned for Kiss Me Kate and ended up doing both. So retirement was well and truly over.

This phase in her life also presented a crossroads. The same day she got the call for the Commonwealth Games, Ginty was also offered a senior faculty role with a prestigious tertiary dance studio in Hong Kong. It meant either choosing to be a career teacher or pursuing life as part of a creative team producing new works. She chose the latter.

Currently taking a well-deserved break, Ginty has put work on hold, despite many offers, in order to decide on her next step. With all her many talents and experience to draw on, she wants her next job to be one that she creates, working as the originating choreographer and/or director.

Looking back, Ginty’s career could have taken a very different path. Had London handed her a role, she might still be performing on the West End, but it just wasn’t meant to be. Although this was a tough period in her life, something was telling her that performing wasn’t her path. Ginty recalls a conversation she had with Joanne Robinson whom she had worked with on Cats and had a good relationship with.

“Joanne was casting for Titanic but I was looking for jobs that offered more than just chorus. So I asked if I could be dance captain,” Ginty recalls. Thankfully, Robinson had already cast Ginty in the role but, unbeknownst to Ginty, there were only two dancers in the entire cast so they only had a resident director. As a result of asking for what she wanted, Robinson revealed that she had always admired Ginty’s work and wanted to work with her, so would make sure that she kept her in mind for future shows. The rest is history.