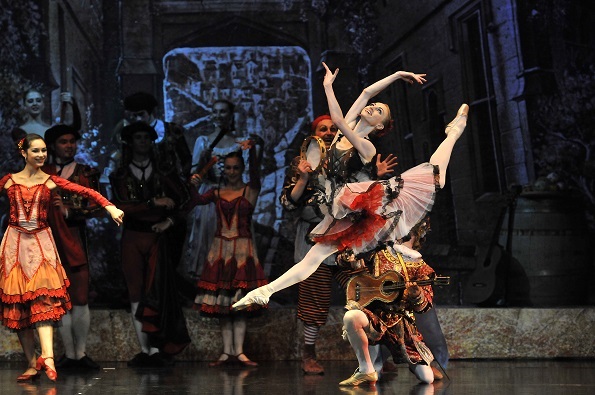 When the Imperial Russian Ballet Company tours their lavish production of “Don Quixote” across the country in April and May, they will be taking a talented young Aussie along for the ride.

Ballet is full of love stories and big dreams and sometimes they spill over into real life. Cue Stephanie Goldhahn from Wollongong and Daniil Kolmin from Mother Russia, two lovers travelling the world with the Imperial Russian Ballet, the latter performing the lead in the company’s latest classic blockbuster, Don Quixote.

Goldhahn’s journey from regional New South Wales to the heart of classical ballet territory was anything but straightforward. Plucked from a dance school in Sydney, she was awarded a scholarship to the prestigious Ballettschule Theater Basel in Switzerland. From there she found her way to the Estonian Ballet, where fate intervened.

“Basically I met him standing behind him at the ballet barre,” Goldhahn recalls. Love blossomed, as it tends to, and Kolmin soon convinced his new Australian girlfriend to accompany him into the world of Gediminas Taranda’s relentlessly touring Imperial Russian Ballet Company.

Fast forward the tape and Goldhahn now has the chance to introduce Kolmin and the rest of the company to the finer points of Aussie culture, as Don Quixote begins its seven-week, 19-theatre tour of Australia.

“I’ll be showing them around, I hope,” Goldhahn says. “We’re actually going to my hometown, which will be pretty amazing for my mum, especially because we watched this ballet company together a few years ago and to tell her that I’m coming back with that company to perform in the same theatre is really a dream come true for me.”

The Imperial Russian Ballet will tour ‘Don Quixote’ across Australia this April and May.

As much as the Don Q juggernaut is a chance for the company to reacquaint itself with its Aussie fanbase and learn a little more about Goldhahn’s homeland, it’s an even bigger learning curve for the company’s first-ever Australian member.

“Being in a Russian ballet company is pretty hard,” she freely admits. “I remember the first time I was with them and we had a three-hour rehearsal right before a three-hour performance, so it was non-stop. When you add travelling on top of that it really takes its toll, so big hats off to the people who’ve done it for years because I’m already tired after one month on the road. But I am getting stronger.”

Apart from the physical rigors of rehearsing and performing the jewels of the classical repertoire, there is the ever-present language issue. “The rehearsals kinda stress me out a bit because I worry that I’m taking too much time because they have to translate and wait for me but my boyfriend’s really helping me with my Russian, so it’s all fine.”

Luckily for Goldhahn, boyfriend Daniil Kolmin has his head around English. “He taught himself in Estonia because most of our rehearsals over there were in English; but when I met him he wasn’t as strong in English as he is now. I’m teaching him a bit of Aussie English now and he’s teaching me a bit of Russian; but his English is much better than my Russian.”

Kolmin, who plays the legendary Spanish knight Don Quixote, has clearly inspired his girlfriend. “His experience is incredible and his dancing is pretty amazing,” she enthuses. “He’s inspired me to strive for bigger roles and really to grow up.”

Indeed, the company recently rewarded Goldhahn with her first solo part, the role of Cupid in Don Q. “That was an amazing dream come true for me, as well as extra work,” she reveals. “My boyfriend really helped me to be focused and, y’know, to really want it, to go for it.”

Stephanie Goldhahn’s new Russian life is certainly a hectic one, (IRBC are renowned for their incredible work rate, often racking up 200 plus shows a year), but it’s also come along at a very “interesting” time in the life of the nation. Recent events in Crimea have revived a few Cold War ghosts and backed Russia into a diplomatic corner. Sanctions, travel bans and chest-beating rhetoric on all sides have certainly increased the temperature; all of which has an effect on Goldhahn and the company.

“I was mainly worried because I wanted to stay a bit longer in Australia with my boyfriend and we were a bit concerned about extending the Visa,” she explains. “I’m not 100 percent sure what’s happening within the company about these things cause I can’t really understand a lot of what they’re saying, but I know they’re reading about it in newspapers and talking about it. Y’know, it’s on everyone’s mind.”

However, once the curtain rises in Ipswich on April 3, the company will be too busy tilting at windmills to worry too much about geo-political game playing. Meanwhile, Stephanie Goldhahn will be striving to secure another crack at the Cupid solo, hopefully in Wollongong, where she will have the chance to perform the role for her mum. “To dance on the same stage where we saw the company do Sleeping Beauty would be amazing for both of us – a real dream come true.”

After opening in Ipswich, the company’s Australian tour will visit 18 other cities. For tour dates and locations visit www.russianballet.com.au