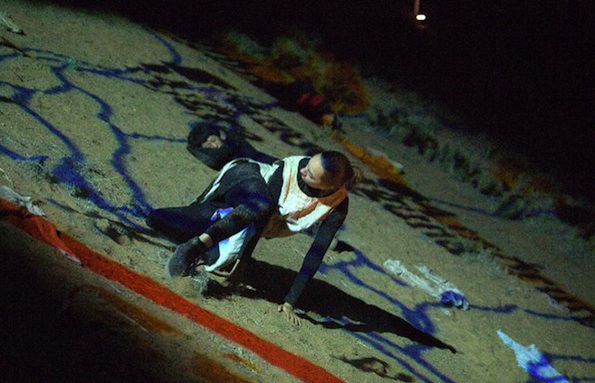 Living in Melbourne, you could never complain that there’s nothing to do or see. If anything, there are too many things to choose from. Well, the decisions are about to get a whole lot tougher, when the brilliant Next Wave Festival comes to town in April and May.

Next Wave is Australia’s biennial festival of new and emerging artists, representing every imaginable artform – from dance, theatre and visual art, to everything in between. In 2014, the festival is subtitled New Grand Narrative; every work is a world premiere that has been made especially for this month-long celebration of art. The city-wide festivities will take place not just in galleries and theatres, but also in unexpected places such as laneways and private homes. Prepare yourself for ambitious, risky and surprising new art, including performance, dance, visual art, sound art – and ideas impossible to categorise.

“Next Wave is renowned for creating an irresistible artistic whirlwind that is impossible to ignore and completely unique in Australia,” said Emily Sexton, Next Wave Artistic Director. “In 2014, we have created a festival experience that will seize your imagination and your soul with a mix of artistic works of outstanding quality, ambition and – even dangerous – experimentation.”

In the 30th anniversary of the cutting-edge arts and culture festival, creations will be exhibited by 239 artists, who will have been incubating their artwork for over two years. An important platform for new and emerging artists, Next Wave has launched the careers of many notable creators, such as theatre ensemble post and comedy music theatre troupe The Suitcase Royale.

“We curate artists who are genuinely seeking out something that’s never been done before and we offer them the tools and support they need to succeed,” said Emily Sexton. “All that hope and dreaming and curiosity in one place – in a city as adventurous as Melbourne – makes for a potent blend of provocation and fun. Challenging, but never too serious; clever, but genuine. Audiences will talk about, see and do things at Next Wave Festival that just don’t happen anywhere else.”

With the full programme under wraps until the end of March, we can tell you that some of Australia’s most exciting young dance artists will be performing and presenting work. Artists include indigenous dancer and choreographer Carly Sheppard, 2007 VCA Dance graduates James Welsby and Natalie Abbott, experimental performance artist Shian Law and Art Start recipients Sarah Aiken and Rebecca Jensen.

A highlight of this year’s festival is set to be Blak Wave, a selection of new and emerging indigenous artists from around Australia, including a dance work inspired by the winds of the Torres Strait.

“Our 2014 festival, New Grand Narrative, has been curated as a story with a beginning, middle, climax and end. In this way, Next Wave Festival allows you to stretch out and take your time to think about things over four weeks, or have it all crash together in one weekend of madness. And you can be sure it will involve as much talking, drinking and eating as it does art,” said Emily Sexton.

Kicking off with a series of talks and parties from April 16 to 28, the main program runs from April 29 to May 11, culminating in The Climax – two art-filled weekends dubbed. Wrapping up the festival is the IETM Satellite Meeting at Arts Centre Melbourne on May 12 to 14.

For more information on Next Wave Festival 2014: New Grand Narrative, stay tuned to the website at nextwave.org.au. The full programme will be announced on Thursday 27 March.