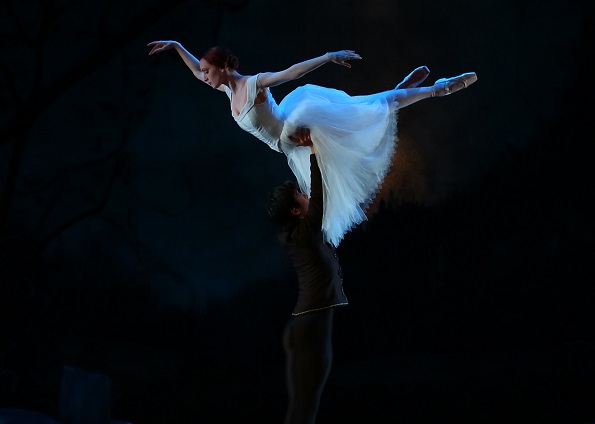 Generally the production transfers very well from stage to screen and technically the dancing is terrific. It is interesting to compare it to the ‘traditional’ Maina Gielgud version we are familiar with as performed by the Australian Ballet, and other versions such as the landmark Paris Opera Ballet production seen in Sydney January 2013.

In this Royal New Zealand Ballet version, for example, Berthe (Giselle’s mother), dressed almost like a Quaker but in beige with a blue apron, tells the sinister cautionary tale of the Wilis to Giselle only, not a large group of villagers, and the mime is heavily truncated. The celebratory dances are for a wedding, not harvest or to please/thank Bathilde and the other aristocrats, the ‘peasant pas de deux’ becomes a duet for the bride and groom – and Giselle catches the bouquet! Also, Giselle is not (as in most versions) crowned Queen of the Harvest and Bathilde doesn’t give Giselle a necklace. It is also interesting to observe that Myrthe herself removes Giselle’s veil in Act2.

The dancing throughout is magnificent and the corps de ballet deal with very intricate footwork at times in Act 1 as rambunctious villagers, yet as Wilis they breathe and bend as one – very ghostly and sinister. Their tight, almost robotic movements and emphatic gestures of rejection were a great contrast to the fluid dancing of the principals, and their own dancing previously in the Act I village scenes.

I quite liked Howard C Jones‘s designs. In Act 1 Giselle’s cottage has a sloping, swirly brushstroke like roof, semi Van Gogh like. My colleagues have compared them in style to William Morris and/or Aubrey Beardsley. Kendall Smith‘s sculptural lighting is magnificent especially some of the effects in Act 2 (along with masses of misty dry ice).

What I did find a bit disconcerting, however, was the mix of styles and periods of dress in Act1 – the villagers are all dressed in traditional ‘Giselle ‘‘peasant’ costumes, but when Bathilde and the other aristocrats of the hunting party arrive they are dressed in the latest late Victorian/Edwardian fashions – a huge incongruous jump in the time frame. Wilfrid’s snazzy maroon jacket deserves a special mention.

What annoyed me at times was the chopping and changing in the photography and the intrusive strange interruption of footage of Murphy and Huan in a field /a cityscape/ in rehearsal. I guess this was to emphasize the idea of art and undying love, but why the abrupt change for the first of the two big main romantic pas de deux in Act2? We are suddenly shown a shot in the rehearsal studio. Yes, the dancing was magnificent but the sudden chop and change was jarring.

The two leads, however, are sensational. Murphy in the role of Giselle was tremendous. Tall and Titian red haired, she makes a very striking Giselle which the pre-Raphaelites would have loved. She is splendid in both acts, revealing a hidden shyness and fragility in Act 1 and enormous control in Act 2 with creamy port des bras. Her ballon in Act 2, in particular, is astonishing as is her first series of explosive turns in Act 2 having freshly risen from the grave answering Myrtha’s summons. Her mad scene in Act1 was very dramatic and moving, and in Act 2 she seemed as light as a feather.

Qi Huan‘s Albrecht was possibly a touch wooden but he dances absolutely superbly and let fly some amazing cabrioles and entrechats when required. He had very regal bearing throughout. The pas de deux for him and Giselle in both acts were tremendous. In this version we get the feeling that he really did love Giselle. Their two pas de deux in Act 2 are breathtaking, mesmerizing and sorrowful. The show is seen through the eyes of an older, haggard, haunted, worn and bearded Albrecht.

Abigail Boyle as Myrtha was tremendous – cold, implacable with the steely technique, glorious arms, and sharp footwork this very demanding role requires. Hypnotic and powerful, she was an imperious guardian of the team of Willis.

Jacob Chown as Hilarion is wonderful as the local man who also loves Giselle. To acknowledge his status as gamekeeper, his entrance is rather solid and flat footed, and he pieces together the identity of the mystery man to reveal Albrecht in disguise. A good man who is genuinely confused as to why his girlfriend no longer cares for him he dances to prove his worth in his solo for Giselle, but despite a sturdy allegro and good legs, he is devastated at being practically ignored for a stranger in town.

As dawn breaks and Giselle is about to return to her grave, Albrecht hands her the small flower from the cross, repeating a flower symbolism from earlier. “No,” she breathes, “it’s yours,” and she gently hands it back to her lover and vanishes. The Royal New Zealand Ballet‘s version of Giselle is big in its adherence to the spirit of the story and sweeping swirling narrative, and an excellent production.