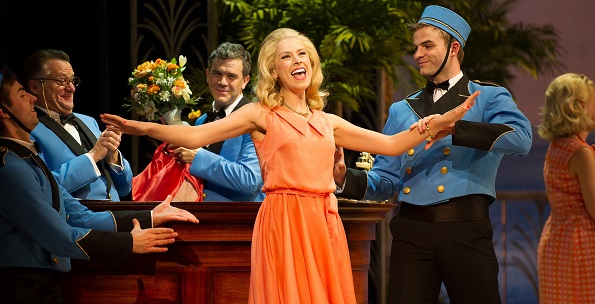 It premiered in Sydney to thunderous applause, with an extended season finishing in December. The musical version of the hit 1988 film starring Steve Martin and Michael Caine maintains the same adult humour yet adds its own twist with upbeat dance numbers and great comedic timing from some of our best performers in the business.

But what exactly does it take to put on a show of this scale? We caught up with dance captain Darren Tyler and performers Amy Lehpamer and Zoe Coppinger, to find out the work involved in preparing for such a show.

What attracted you to become part of this production?

“Dana Jolly was the choreographer, who I’ve worked with. She was actually my first resident choreographer for the first show I ever did for Showboat back in 1998. She had asked me whether I’d be interested in assisting her and Dana’s choreography is so my style. It’s very lyrical and a bit more old style jazz, which I love. It’s more technical and Dana’s so precise in her ideas of what she wants. It’s great choreography. So when she asked me, I said, ‘Yes definitely.’”

It’s great to see her progression in the media. You must be really proud of her.

“My first show was her first job as a resident choreographer and now she’s moved on to choreography and she’s doing so well. She’s so clever and giving to all of her dancers. She knows how to choreograph for the non-dancers as well and still make them look good. [Laughs.]”

Because of your close working relationship with her, is that how your role as dance captain came about?

“One of the big things was that she couldn’t make the start of rehearsals and she wanted someone to be there who she knows well and knows her work well. I’ve known Dana for 15 to 16 years now, so we have our own dialogue. I think we work well together.”

For those that wouldn’t know, what exactly is the role of a dance captain?

“So, basically once the show is up and running, it’s my job to maintain the choreography that was taught in rehearsals, because after eight shows a week, choreography and staging can sometimes change slightly. So, it’s just my job to keep it in check and make sure everybody is doing exactly what they are choreographed to be doing. And when an understudy calls, I teach the understudies the roles. So it’s a big job, but the good thing about this one is that I learnt a lot of good choreography before rehearsals started.”

And had you seen the film prior to starting?

“Years ago. Loved it! Steve Martin and Michael Caine are a great combo and it’s just such a funny and clever story. It’s fun to see these characters and they’re not trying to be good characters from the film. They are putting their own take on it, which I think is great. I think it’s easier to just copy and they’re not, which is great.”

Was humour part of the attraction of this production?

“Yes, definitely. I think there’s a lot to this show, which is quite wonderful. It really fires, it’s snappy and the laughs are genuine laughs. It’s not forcing the audience to laugh along with you. It’s been an absolute bonus working with this cast. Matt [Hetherington] is extraordinary, Tony [Sheldon] is just so alive and in the working and rehearsal room he’s just wonderful.”

Had you watched the film prior to rehearsing?

“I’d seen the film earlier. I actually did a production of Dirty Rotten Scoundrels in Melbourne for The Production Company in 2009, so I’d been familiar from that. It’s been a few years so I’m a bit older and wiser and have a bit more to say and do I guess. I try not to watch films actually because I know what the blueprint of it is, but with musicals you kind of have to make up the rules as well.”

Do you feel any pressure?

“I guess you do. There’s a certain element that you do worry about. It’s a very beloved film. People really have it in their heart. But because it is so playful, people can’t help but get involved, and I think despite themselves, 10 minutes into act one, everyone appreciates it. They’re going to know what happens if they’ve seen the film, with a few twists and turns, but I think the musical version stands alone as a piece that is very much an audience favourite.”

Is singing your main strength when it comes to musical theatre?

“Yeah, I guess so. I would call myself a singer and actor rather than a singer and dancer or the other way around. But we have to do all of it. That’s how it works. But I’m definitely a singer more than anything else. It’s always a treat when you work with dancers and they’re very kind to me, but I love doing it all. There’s nothing like pulling a number when you’ve executed all three skills. This show was very physical so you had to be willing to put your body on the line to get the message across.”

Do you have any pre-show rituals?

“I tend to just keep quiet. This show was interesting because my character didn’t enter probably for half an hour to forty minutes into act one. So everyone else would be on stage well and truly before I got there. So I kind of didn’t mind that. I kind of got my own backstage quiet.”

Can you tell us about the audition process?

“I came in and sung for the panel and then went through and did a dance call. Once we did that, I sung again, did some scales and that kind of thing and then went in for a partner call.”

Did you know any of the dancers before rehearsals?

“I knew one dancer, and we just knew each other through auditioning, but it’s amazing how everyone clicked so quickly. It became such a family.”

Would you say dance is your main strength?

“I think singing is my main strength. But my dancing is strong as well.”

Are you conscious of being a triple-threat?

“I think it’s important to have all three now because the industry is so strong. There are so many talented people. But I tend to take it step by step. I think that’s the way to be.”

Has musical theatre always been your passion?

“Yeah, I don’t know what it is about it. I think it’s the thing of being able to play a different character everyday and trying out different things, so it’s always different. Nothing is ever the same.”

Had you watched the film?

“Yes, I did. I watched it and I loved it. I thought it was hilarious.”

Did that help you get into the character?

“Yes, it helped me with the mood of the show. I didn’t realise how funny it was until I watched the movie. I thought, ‘This is hilarious!’ [Laughs.]”